Having Christ as the One Dominant Purpose in Life: On the Feast of the Dormition of the Theotokos

Source: Holy Trinity Orthodox School
Priest Anthony M. Coniaris | 28 August 2014
Now it happened as they went that He entered a certain village; and a certain woman named Martha welcomed Him into her house. And she had a sister called Mary, who also sat at Jesus' feet and heard His word. But Martha was distracted with much serving, and she approached Him and said, "Lord, do You not care that my sister has left me to serve alone? Therefore tell her to help me." And Jesus answered and said to her, "Martha, Martha, you are worried and troubled about many things. But one thing is needed, and Mary has chosen that good part, which will not be taken away from her. And it happened, as He spoke these things, that a certain woman from the crowd raised her voice and said to Him, "Blessed is the womb that bore You, and the breasts which nursed You!" But He said, "More than that, blessed are those who hear the word of God and keep it!" (Luke 10:38-42; 11:27-28) 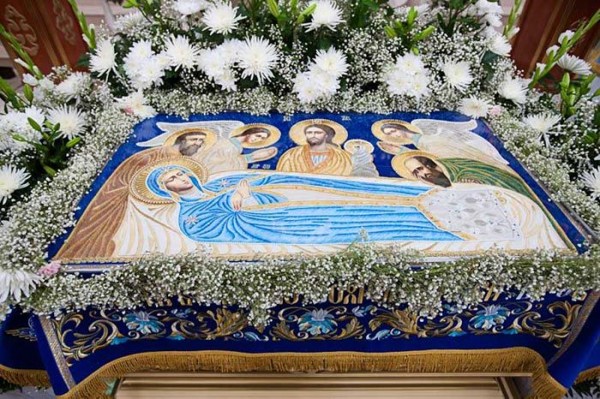 “But the Lord answered her, ‘Martha, Martha, you are anxious and troubled about many things; one thing is needful. Mary has chosen the good portion, which shall not be taken away from her.’ (Luke 10:41-42).

We’re all a bit like Martha: Jesus came for dinner and Martha spent the whole time in the kitchen with the pots and the pans “anxious and troubled about many things” while her sister Mary sat in the living room listening to Jesus. “Mary has chosen the good portion which shall not be taken away from her,” said Jesus. Lots of women will never forgive Jesus for his gentle chiding of Martha. But all He was saying is that we can clutter our lives unnecessarily with so many things that we lose sight of the main purpose.

Anxious about many things

Man is a wanting animal. There is no end to the number of things he wants. Modern advertising creates in us a feverish desire for more and more things. We are made to feel that our happiness will never be complete unless we possess the very latest model and style of whatever it is we want. As Phillips Brooks said, “We are like children with our houses strewn with half-read books and half-played games and half-eaten fruit; who stand at the doorway crying out into the open world for more instead of using and appreciating what we have already.” “Troubled and anxious about many things!”

A wealthy man once entertained a preacher for dinner at his club. Afterwards he took the clergyman to his home, an impressive-looking mansion, richly furnished, equipped with no less than ten bathrooms. He showed him pictures of his yacht, his beautiful country estate, his sports equipment, his stables. The preacher remarked, “You have so much!” “Ah, yes,” replied the rich man, “but the trouble with having a lot of things is that you can’t control them; they control you.” “Anxious and troubled about many things!“

When a visitor from Europe saw how much time and money Americans spend for entertainment he said, “What are you trying to do — entertain yourselves to death?”

“No, I’m afraid it’s just our passion for escape,” replied an American friend.

“Escape? That’s a good one!” replied the European. “You have the richest, most bountiful civilization in all of history, and you have the most satisfying way of life in the world — to hear you talk of it — and yet all you want to do is escape!”

One Thing is Needful

Troubled and anxious about so many things! And yet never finding the contentment, the peace and the satisfaction we seek! What does Jesus say to all this? He turns to Martha and says, “One thing is needful.”

He calls on us to simplify life, to withdraw from the distractions in order to concentrate on the one thing that is important. When Henry David Thoreau explained why he left the world and retreated to Walden Pond, he said, “I went to the woods because I wished to live deliberately, to confront only the essential facts of life, and see if I could learn what it had to teach, and not, when I came to die, discover that I had not lived. I did not wish to live what was not life, living is so dear … I wanted to live deep and suck out all the marrow of life … (I wanted) to reduce life to its lowest (simplest) terms!”

Every airline ticket counter is equipped with scales. The scales are there to weigh the baggage each passenger takes along. Each passenger’s baggage is not allowed to exceed a certain limit. If a passenger exceeds this, he must pay extra. Wise passengers go over their baggage frequently and take out gear that contributes to excess weight. Jesus tells us to get rid of the excess baggage that causes us to be “troubled and anxious.” Simplify life. Reduce it, He says, to the “one thing that is needful.”

What is the “one thing needful”

As we read the epistles of St. Paul we see that he uses one phrase over and over again: “One thing! One thing!” he keeps saying. “That I may know Christ. …” Everything else is refuse. “This one thing I do, forgetting what lies behind and straining forward … in Christ Jesus.” Nothing but Christ has value. Nothing but Christ will endure forever. He is the great treasure, the “pearl of great price.” “In Him reside all treasures of wisdom and knowledge.” He is “the way, the truth and the life.” To believe in Him is to have life eternal, forgiveness, peace, joy, purpose, meaning.

When we make Christ our controlling principle, our one dominant purpose, He becomes like a traffic policeman who stands on duty at the intersection and directs traffic. He controls the instincts, the fears, the anxieties within us. When we deny Christ, then the instincts and the drives come to the surface uncontrolled and wreak havoc. When Christ is the controlling principle in our lives, all anxiety and fears are held in control. There are not many selves but one self — the Christ-controlled self. There is an order, a unity, a purpose, a peace, a simplicity in life that only He can give.

“Mary has chosen the good portion which shall not be taken away from her.” When a person chooses “the one thing needful,” Christ, he chooses the “portion that shall not be taken away from him.” A good question to ask ourselves about the many things we strive for in life is, “How long will they last?” Physical beauty? How long will it last? Money? How long does it last? Pleasure? How long will it last?” “Do not labor for the food that perishes,” said Jesus, “but for the food which endures to eternal life, which the Son of man will give to you …” (John 6:27). He who chooses Christ as his one dominant goal in life is no longer “troubled and anxious about many things.” He has removed the distractions. He has simplified life. He has chosen the “one thing that is needful… the good portion which shall never be taken away from him.” “The world passes away and the lust of it but he who does the will of God abides forever.” 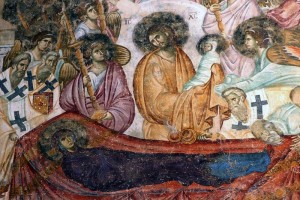 A Divided Self or “My Name is Legion”: On the Twenty-Second Sunday after Pentecost

A prison inmate, in a series of unfortunate events, had his teeth pulled, his appendix removed, and his…

Giving God to Your Enemy: On the Nineteenth Sunday after Pentecost

Why must I love my enemy? How is it possible to love one’s enemy?

Let Go!: On the Twelfth Sunday after Pentecost