Source: Saint Innocent Orthodox Mission
Celebrating the Feast of the Dormition we celebrate the feast of life, not only of the Virgin Mary, but of all human beings.
Priest Geoffrey Ready | 28 August 2015 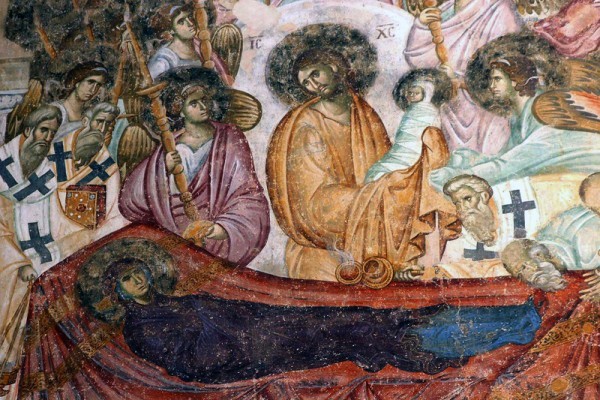 ‘In giving birth, thou didst preserve thy virginity. In falling asleep thou didst not forsake the world, O Theotokos. Thou wast translated to life, O mother of Life, and by thy prayers thou deliverest our souls from death.’ (Troparion of the Feast of the Dormition)

‘Neither the tomb nor death could hold the Theotokos, who is constant in prayer and our firm hope in her intercessions. For being the mother of Life, she was translated to life by the One who dwelt in her virginal womb.’ (Kontakion of the Feast of the Dormition)

The hymns of this Feast of the Dormition refer again and again to the most holy Theotokos as the ‘Mother of Life’, but the Virgin Mary is not the first to be given this title. The title ‘Mother of Life’ directs us back to the beginning of creation, to the first man and woman in the garden. For, at the precise moment that the Lord God pronounces the curse of death for their disobedience, the man, Adam, turns to his wife and, in what is perhaps the most optimistic act of the entire Old Testament, calls her Eve — Zoe — Life, for she was, as the Scripture says, the ‘mother of life’.

We were not created for death. Death was not part of our nature, nor is the evil which causes death; and death is by no means ‘natural’. But neither was the punishment of death which followed from our disobedience any kind of contrived or arbitrary punishment; it was simply reality. By disobedience, we turned away from God and thus from the Source of Life; and so death became our destiny, for our nature became corrupted and we were no longer in direct communion with life.

Death became our end, because, contrary to the what most people in our society believe and what certain Western confessions teach, the human soul is not naturally immortal. Rather, immortality is property of God alone; human beings cannot possess it, and we can only share in God’s own immortality by grace. Adam and Eve fell, not from a high state of perfection and immortality, but from a life growing and maturing toward perfection in God, growing towards sharing God’s own eternal life.

The fall arrested that growth:  sin brought death, and death brought sin; as the Apostle Paul teaches ‘death is the wages of sin’, while ‘sin is the sting of death’. In order for one to be conquered the other must be overcome. Humanity remained enslaved until Holy Pascha, when Jesus Christ, the ‘Only Sinless One,’ trampled down death by death, and rose from dead;  He liberated us from death’s bondage, shattering its dominion, and destroying the effective power of Satan.

The Feast of the Dormition is itself a mini-Pascha, for it is to this resurrected Body of Christ, in which the power of death is shattered once and for all, that the most holy Theotokos united herself, so that she too shares in her Son’s victory over death. Certainly, she gave birth to the Giver of Life in the flesh; and for that reason, she is indeed ‘Mother of Life’. But the Theotokos was not an empty vessel for the Son of God. She, like every human being, has a will and a heart:  life and death were set before her, and she chose life; she chose to live for her Lord and Creator, and to make every act and breath an act of life.

That is why she is called by the Fathers of the Church the New Eve, and that is why she fulfills the prophetic title Adam gives to his wife, the Mother of Life. So oriented was her heart toward her God, so filled and transfigured was she by the life of Christ, that even her death became an act of life; death could not contain her.

And now, being truly liberated from the bondage and fear of death, we too must take up where Adam and Eve left off, in the struggle to mature in perfection, to share in the divine life. We too must choose life; we too must make our every breath and movement an act of life. This is only possible when we abide in Christ, who is in Himself the way, the truth and the life.

All that is left to the evil one after the Resurrection of Christ, the Fathers teach us, is the power of deceit and delusion; Satan no longer holds the power of death. Yet if we allow the evil one to increase and perpetuate our separation from God, then we are giving back into his hands the power of death, and placing ourselves once more into its bondage. But if we, like the Theotokos, choose life, if we turn to again to the Source of Life, and unite ourselves to the Risen Christ, then we can share in the victory over sin and death; we can abide in God’s eternal life.

How do we choose life? The Fathers of the Church clearly present the path to us.

First, through baptism: in this sacred mystery, the old man within us is buried with Christ, and we rise to new life in Him; and we are united to the risen Body of Christ, the Church.

Second, through true repentance and confession of sins. With the help of our spiritual father, we can open our wounded hearts to the life of God. In fact, for the Fathers of the Church, the mystery of confession is a second baptism. Every time we avail ourselves of the Lord’s mercy we are given new life; and so gradually but surely, through ascetical struggle and repentance, our hearts are healed and filled with the life of Christ.

And third, in the Divine Liturgy, we partake of that one Resurrected Body which has trampled down sin and death, and unite ourselves to it. The Eucharist is the life-giving Banquet of heaven, and, as we pray in the Liturgy, the bread and wine become the ‘life-creating Mysteries of Christ’ and  also the ‘medicine of immortality’.

So as we celebrate this Feast of the Dormition we celebrate the feast of life, not only of the Virgin Mary, but of all human beings; for, in the Theotokos, human nature has reached its goal of sharing in the life of God. Soon, one week after the start of the liturgical year, we celebrate the birth of the most Holy Virgin. Here, two weeks before the end of the liturgical year, we celebrate her repose and glorification. Thus, associated with and subordinate to the cycle of the life of Christ, the cycle of the life of the Theotokos manifests the development of a human nature which is entirely faithful to God; it is the human race which is carried up and received into heaven with her.

It is true that Mary was granted privileges that cannot be ours; however, her vocation is the vocation of every human being. It is for that reason that her icon is painted in the apse of Orthodox churches: we are heading to where she is.

In the words spoken by the Prophet Moses to the People of Israel before his own repose:

‘I call heaven and earth to witness against you this day, that I have set before you life and death, blessing and curse;  therefore, CHOOSE LIFE, that you and your descendants may live, loving the Lord your God, obeying his voice, and cleaving to him;  for that means life to you and length of days, that you may dwell in the land which the Lord swore to give to your fathers, to Abraham, to Isaac, and to Jacob.’ 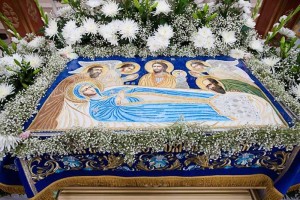