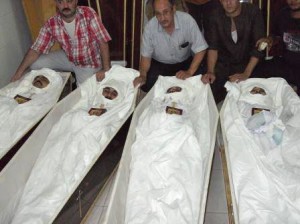 CAIRO, Egypt (Morning Star News) – Following the shooting death of a priest in Northern Sinai, Christians in Upper Egypt and elsewhere are living in fear after four Coptic Christians were killed near Luxor in the wake of the deposing of Mohamed Morsi as president.

“I am too scared to leave – I haven’t been able to go outside my house for four days,” said Maria, a Coptic woman in her 30s who attends the Church of the Virgin Mary in Luxor, which Salafist mobs have attacked unsuccessfully several times since June 30. She requested her last name be withheld for security reasons.

A funeral service was held Sunday (July 7) for the four Christians killed in a village outside of Luxor. In Al Dabaya on Friday, Islamists attacked Coptic Christian Emil Naseem Saroufeem, 42; for reasons that remain unknown, they blamed Saroufeem for the death of Hassan Sayyed Segdy, a Muslim whose body had been found earlier that day, according to a human rights worker and other sources. Saroufeem was known to be a supporter of the Tamard or “Rebel” movement that began gathering in cities across Egypt on June 30 to demonstrate against Morsi of the Freedom and Justice Party, created by the Muslim Brotherhood.

A mob formed and began beating Saroufeem, who escaped briefly when two relatives, Mouhareb Noushy Habib, 38, and Romany Noushy, 33, hid him, according to Safwat Samaan, a director at human rights group Nation Without Limits. The rabble caught up with the three Christians in the apartment of Rasem Tawadrous Aqladios, 56. Saroufeem and Aqladios were bludgeoned to death. The other two, Habib and Noushy, died when they were beaten and repeatedly stabbed, Samaan and others told Morning Star News.

The assailants then turned their attention to other Coptic villagers, beating many of them, and then looting and burning down their homes. Three other Copts were seriously wounded, according to Samaan and others.

In all, roughly 20 homes were destroyed. The village is calm now, but most of the Christian residents have left and are homeless because they are too afraid to return or have no homes to return to.

Samaan said it was very difficult to pinpoint the cause of the attack, saying a mix of religious, political and possibly even criminal motives may all have been factors.

“The situation is calm there now,” he said, “but there are about 95 Christian families that are staying at the church of Mar Youhana because they are too scared to go back. Also, a lot of these people had their homes burned down, and if not that, a lot of them had their houses torn apart and looted. The church is trying to get them to return home, but a lot of them are refusing.”

In Qena and Luxor in Upper Egypt, scattered attempts to attack churches took place over the weekend with little success. At the Church of the Virgin Mary and the Church of the Archangel Michael, both in Luxor, soldiers pushed away several such Islamist attempts.

As Ramadan approaches, survivors of the attacks and other Copts were girding themselves for this year’s fasting season, historically a time of spikes in attacks on Christians in Egypt and the Middle East. Political tensions could exacerbate the usual increase.

“In general, I think the attacks on Christians will increase,” said Samaan, “as there have been more threats to attack churches. People from the Muslim Brotherhood are taking it upon themselves to wage jihad to defend Morsi and their religion.”

In all, dozens of homes and businesses were burned to the ground, a handful of churches were attacked, and one church guest-house was destroyed, human rights activists said, in attacks meant to punish Christians for their alleged part in a supposed conspiracy to unseat Morsi.

“Copts understand and know very well there is a price that has to be paid, and what the Muslim Brotherhood people are saying is stirring people up against the Copts, even though the Copts were just participating in democracy just like everyone else,” said Ishak Ibrahim, freedom of religion and belief officer at the Egyptian Initiative for Personal Rights.

On Wednesday (July 3), Egypt’s military chief announced that then-President Morsi had been deposed. In the weeks leading up to the demonstrations against Morsi by millions, Islamists had issued threats against Christians, whom they held responsible for the movement.

Hours after the military made the announcement that Morsi had been deposed, the Islamists attacked. The last attack happened on Saturday (July 6) in the town of Arish in Northern Sinai, when masked gunmen shot and killed the Rev. Mina Aboud Sharubim in front of a church-owned building, according to the Coptic Watani Weekly. No reason has been given for the attack.

The 39-year-old Sharubim was buried today (July 8) after a service in Heliopolis, a suburb of Cairo. He had been ordained a few months more than a year ago.