Source: Assyrian International News Agency
Once they saw that she was a Christian [because of the cross hanging on her rear view mirror], they jumped on top of the car, to the point that the vehicle was no longer visible. The roof of the car collapsed in. When they realized that she was starting to die, they pulled her out of the car and started pounding on her and pulling her hair--to the point that portions of her hair and scalp came off.
Raymond Ibrahim | 01 April 2014 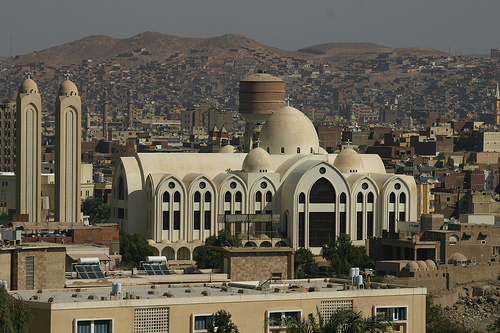 One of the slain, a young Coptic woman, was savagely mauled and molested before being murdered–simply because her cross identified her as a Christian to the Brotherhood rioters.

According to an eyewitness who discussed the entire event on the Egyptian program, 90 Minutes, Mary Sameh George was parking by the church to deliver medicine to a sickly, elderly woman:

Once they saw that she was a Christian [because of the cross hanging on her rear view mirror], they jumped on top of the car, to the point that the vehicle was no longer visible. The roof of the car collapsed in. When they realized that she was starting to die, they pulled her out of the car and started pounding on her and pulling her hair–to the point that portions of her hair and scalp came off. They kept beating her, kicking her, stabbing her with any object or weapon they could find…. Throughout [her ordeal] she tried to protect her face, giving her back to the attackers, till one of them came and stabbed her right in the back, near the heart, finishing her off. Then another came and grabbed her by the hair, shaking her head, and with the other hand slit her throat. Another pulled her pants off, to the point that she was totally naked.

The eyewitness, as well as many others who have since appeared on videos, complained about Egyptian State Security and how it did not intervene–just like under Morsi, when St. Mark Cathedral was besieged, even as security stood by–how it knows exactly who the murderers are, and how one of Mary’s murderers, whom “everyone reported to Security,” was simply relaxing in his home, not even hiding.

Added the eyewitness: “Let me tell you, here in Ain Shams, we [Christians] know that every Friday is a day of death; that the day after Friday, Saturday, we’ll be carried to the morgue!”

In fact, the overwhelming majority of attacks on Egypt’s Christians occur on Friday–the day when pious Muslims meet in mosque for prayers and to hear sermons.

The significance of this fact can only be understood by analogy: what if Christians were especially violent to non-Christian minorities on Sunday–right after they got out of church? What would that say about what goes on in Christian churches?

What does it say about what goes on in Muslim mosques?

A video of Mary’s family members has one woman screaming out the following words–which may be of interest to some Americans:

A message to [U.S. President Barack] Obama, who is calling for the Brotherhood to return to power again. I want to tell him, have mercy, enough is enough! His brother is in the al-Qaeda organization! Why do you want to destroy Egypt?….Egypt will remain whether you, the Brotherhood, or anyone else likes it or not!

She was referring to something that is as well known in Egypt as it is little known in the United States: that the Obama administration is a sponsor of the Muslim Brotherhood, which itself is connected to al-Qaeda.

The rest of the video portrays some of Mary’s other family members–many in tears and near hysteria–prompting one to wonder: where is the U.S media? I have not seen a word on this latest Islamic attack on a church and Christians on BBC, CNN, or any of the so-called “mainstream media”? Why is that? They had no problem constantly showing us (over and over again) a video clip of a hysterical female relative of a member of Malaysian flight MH370.

The mainstream media is silent because Muslim persecution of Christians in general–Obama-sponsored Muslim Brotherhood in particular–throws a huge wrench in that narrative.

After all, how many Americans ever heard of the largest massacre of Syrian Christians by U.S.-supported Islamic rebels?

Responding to this latest murder of a Christian, Coptic Bishop Raphaeil wrote:

Oh how lucky you are, Mary, you who are beloved of Christ. They tore your body because of the Cross. Yet they offered you the greatest service and gave you a name of honor as one who has attained the crown of martyrdom.

More poignantly, the bishop quoted Christ in the Bible, “Yes, the time is coming that whoever kills you will think that he offers God service” (John 16:2)–a reference to the fact that the Muslims slaughtering the followers of Christ all around the world quite often believe they are doing God’s (or Allah’s) work.

Hence why anecdotes such as Friday’s are becoming immensely regular in the Muslim world. Indeed, only a few months ago, two other Coptic Christian girls — both also named “Mary” — were slain when Brotherhood supporters opened fire on yet another church.

Such is the dramatic, eye-opening, and medieval world outside U.S. borders that that the “powers that be” do not want you to know about–for only their well-crafted, self-serving narratives must prevail.