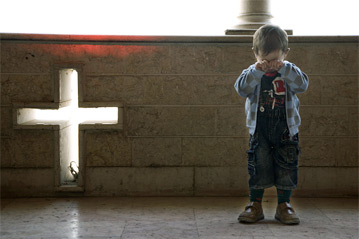 “Every day when I walk to the school I work at I hold my breath; every minute something can happen,” she wrote in a first-person account to Open Doors USA, an organization supporting persecuted Christians. “Many streets are closed and when you walk the streets you see the traces of the battle: little fires all over the streets. Also in our house you see the traces of the war: we already noticed a bullet hole in our guest room, but recently I also discovered one in the room of my girls.”

As the conflict between President Bashar al-Assad’s forces and rebel fighters rages on, the country’s Christians fear they are becoming easy targets for Islamic extremists.

“In fact attacks on churches happen a lot now. They are also targeting Christians,” Hanna wrote. “Many of them are killed or kidnapped. When they are kidnapped they ask their families for ransom or they force them to convert to Islam. Women are often raped. The people that return from such events are traumatized. One of the men I know that came back from a kidnapping didn’t speak a word since he came back. He is crying a lot. Nobody knows what happened to him.”

Nina Shea, who directs the Hudson Institute’s Center for Religious Freedom, wrote in the National Review Online about the plight of Syria’s Christians. She relayed a report by the Vatican news agency Fides about the discovery of a mass grave containing 30 bodies near the ancient Christian town of Sadad. Since Oct. 21, rebel-allied Islamist militias have killed 45 people there in total.

“Surviving relatives and friends uncovered the graves after government forces recently recaptured the town from rebels,” Shea wrote. “Those killed were reported by the local Syriac Orthodox metropolitan, who presided over 30 of their funerals this week, to be Christian civilians, including women and children.”

St. Theodore’s Syriac Orthodox Church, along with other churches and a monastery, have been desecrated, Shea wrote, and about 2,500 families have fled Sadad.

Rebels allied with al-Qaeda have not been shy about imposing their harsh view of Islam on areas under their control.

The town of Raqqa, CNN reported, formerly was one of Syria’s most liberal cities before Islamist radicals took over. Now locals call it Tora Bora.

After attacks by Assad’s regime on the town, moderate rebels were pushed aside by foreign jihadist rebels from the Islamic State of Iraq and Syria (ISIS), a militant group with links to al-Qaeda. They started indoctrinating children with their extreme view of Islam. Edicts began springing up on the town walls — No smoking. No cameras. Women could not walk alone or style or show their hair.

A man called Adnan, whose name was changed for fear of his safety, was caught writing anti-ISIS graffiti and filming. The jihadists dragged him into a church they had torched and turned into an ISIS base.

“Every 15 minutes, someone poured water on me, electrocuted me, kicked me, then walked out,” he told CNN, adding that the screams of other tortured prisoners was worse than his own pain.

“When a person is tortured in front of you, you feel responsible. That’s the hardest. One guy still inside used to call me Dad as I taught him about democracy,” Adnan said.

Shea wrote that Syria’s top Catholic leader, Gregorios III Laham, the Melkite Greek Catholic patriarch of Antioch and all the East, estimates more than 450,000 of Syria’s roughly 1.75-2 million Christians have fled their homes since 2011.

Hanna wrote to Open Doors USA that she and her husband struggled with that decision.

“As a mother and as a wife I want to leave, but as a Christian I want to stay. Every time my husband and I pray, God gives us a burden on our heart: stay in Syria,” she wrote. “He has things to do for us here. God will bless Syria, know this for sure. He is already blessing us. Every time we go to church, the church is full; people come together in times of despair.”

Many new refugees from Muslim backgrounds are appearing at her church, she wrote. They say they have lost everything but in Jesus have found what is most important.

“The situation is hard,” Hanna wrote, “but we are living by faith.”

Shooting in Kazan – How Did…

"Foma.ru" spoke with the rector of the church dedicated to the Descent…

‘Pray for Peace’: a Plea from…

Abba Poemen said, “Teach your mouth to say that which is in…

Most viewed articles
The Artos Bread: an Experience of God’s Presence106
What is Reality?100
Shooting in Kazan – How Did God Allow Such a Tragedy? A Priest Replies88
“Make It So!” vs. “Let It Be!”83
Metropolitan Onuphry: Being Faithful to Christ Means Fulfilling His Commandments79
‘Pray for Peace’: a Plea from Jerusalem as Violence Continues46
ROC Launches 18th “Bus of Mercy” in Omsk39
Most popular authors
Pravmir.com team252
Fr. Gabriel Bilas106
Priest Luke A. Veronis100
Archpriest Stephen Freeman83