Source: Levant Report
I hope American Christians do not believe that this is a war of Syrian Muslims against Syrian Christians – nor even a war between native Syrians.
Archpriest Joseph Huneycutt | 11 April 2014
Two-and-a-half years ago Fr. Joseph Huneycutt traveled to Syria as part of an official delegation of Christian pastors and leaders to investigate the emerging political crisis and to assess the situation of Syria’s Christians. 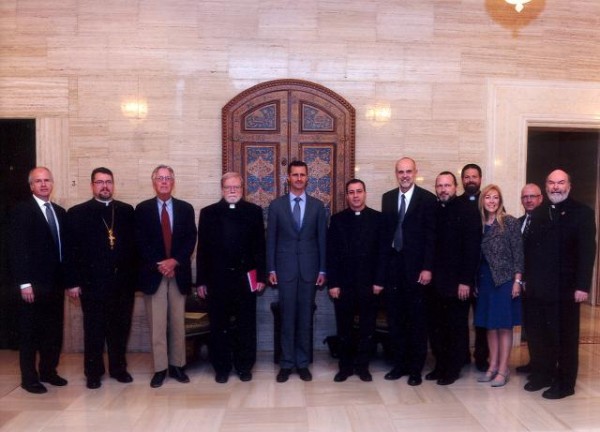 The September 2011 trip was sponsored by the Antiochian Orthodox Archdiocese of North America, and a report of the delegation’s findings was issued here. Now in its third year, the Syria conflict has taken countless lives and has left much of the country destroyed. Reports seem to come in weekly detailing the struggles of Syria’s ancient Christian community. Reports of kidnapping, murder, rape, torture, and destruction of churches at the hands of rebel insurgents are now a common theme of the Syria crisis. Last December, Fr. Joseph’s parish, St. Joseph Orthodox church in Houston, hosted the “Hope, Humanity, Healing” benefit concert to spread awareness of the plight of Syria’s Christians and to raise funds for the relief of all suffering innocents of the conflict. Fr. Joseph agreed to speak with Levant Report this week:

Levant Report: Thank you for agreeing to talk to us about the Christian situation in Syria. Last December, your parish, St. Joseph Orthodox church, hosted a benefit concert for the Syrian humanitarian crisis. What prompted you to put together such an event and how did the community respond?

Fr. Joseph: The event came together thanks to the dream of St Joseph parishioner Lama Nashawati DeVries, a classically trained professional pianist, along with her brother Deacon George (Bassam) Nashawati, a violinist for the San Antonio Symphony.  They teamed up with other Houston area performers, both within and without the parish:  Christine Yacoub, Len Verrett, Mariam Haddad, Osama Raad, Tracey Parker, Dr Bill Attra and the St Romanos Chorale, and pulled together a special night of entertainment:  “Hope, Humanity, Healing – A Musical Offering to Syria.”  It was standing room only in the parish hall; around 250 people came out to enjoy the show and support the cause.  The event raised $18,000 of which the Diocese of Bosra-Hauran, Jabal al-Arab, and the Golan in southern Syria, and the St Gregory Orthodox Society for the Elderly and Orphans in Damascus were the beneficiaries.  Thanks God, it was a very special evening in support of our brothers and sisters in Syria.

LR: The sister diocese to your own (the Antiochian Diocese of Wichita and Mid-America), is the Archdiocese of Bosra-Hauran in southern Syrian. While the destruction of churches and persecution of Christians is well documented in northern Syria, we haven’t heard much out of southern Syria. What do you know of the current Christian situation in southern Syria?

Fr. Joseph: What I can tell you is, though the Christian presence in southern Syria has diminished, the charitable support of refugees continues; those who remain live in danger every moment.  It will take heroic hard work to rebuild – the land and the people – once this war comes to an end.

LR: During September 2011 you were part of a delegation of priests and pastors that traveled to Syria for the express purpose of investigating the political crisis, especially as it impacted the Syrian Christian community. Fr. Patrick Henry Reardon’s final report was generally critical of mainstream reporting of the Syria conflict at that time in American media. The report suggested that the narrative of a mass democratic uprising was flawed, and that there was a dangerous, extremist element within the opposition committing assassinations and terrorist acts. Now, two-and-a-half years after your trip, what is your assessment? Do you think Fr. Patrick’s characterization has been born out?

Fr. Joseph: I believe Fr Patrick’s characterization of the situation as we witnessed it in 2011 was accurate.  For example, one night I came back to the hotel and signed on to America Online.  The news on AOL said:  “Bloodiest Day Yet in Damascus” – it featured a video of a mass demonstration; gunshots could be heard.  Later, I turned on the TV and saw that certain news channels were reporting the same and showing footage of other massive demonstrations in Damascus.  These networks, like AOL, were not local to the Syrian situation.  Our group had traveled all over Damascus that day.  Granted, Damascus is a big city – but our experience on that day, singled out by the foreign news media, could not have been more different.  We saw no signs of unrest or demonstration, but did see families picnicking on the side of the road, shoppers going about their business, etc.

While speaking in Canada and the northeastern US in the months following the 2011 trip, I reported what I had actually seen and heard while in Syria.  Invariably my words were met with suspect curiosity, even disbelief, based on what my hearers had witnessed on American television.  Ironically, I  sounded like a propagandist!

LR: What was the most surprising or unexpected discovery for you personally while serving on this delegation to Syria?

Fr. Joseph: The gracious hospitality of the Syrian people never ceases to amaze!  It was also surprising to witness, with my own eyes, the extent to which televised media actually makes news (rather than just reporting) which shapes public opinion and governmental policy.

LR: While major Middle East media outlets like Lebanon’s The Daily Star covered the 2011 Christian delegation to Syria, there was not much notice of it at all in mainstream American press, other than some local and church news sources. Did you feel that you were ignored? Why do you think there wasn’t much notice of this historic trip, which even included a high level meeting and interview with President Assad himself?

Fr. Joseph: I traveled with the 2011 Syrian delegation because I was invited by his Eminence, Metropolitan Philip (Saliba); the intent was for us to witness the state of the Christians there.  Other than fear, given the news, I had no expectations of self, motive, media, or anything else.

We had almost two hours with President Assad, just our delegation and an interpreter; he addressed all of our questions and concerns, even those critical of himself, without hesitation.  Much of what he said has proven to be as he said; time will tell.  Perhaps our visit served merely as an encouragement to the Syrian faithful.  May God preserve them!

As a side note, a funny story:  My non-Orthodox mom called a few months after our trip to report that our delegation, pictured with President Assad, was shown on some protestant TV program.  They were doing a story about how, in the midst of war, missionaries are bringing the Christian faith to Syria!

LR: With recent reports of Christians in opposition held Raqqa province being forced to live under “dhimmi” status, things are not looking good for the future of Syria’s Christian community. What might American Christians do to help support the continued Christian presence in Syria?”

Fr. Joseph: My heart truly grieves for Syria.  I have been twice, having spent only a few weeks of my life there, but those days are unforgettable.  The unimaginable days which the Syrians now endure will eventually pass.  But for those who endure them, these days will be conversely unforgettable.  I hope American Christians do not believe that this is a war of Syrian Muslims against Syrian Christians – nor even a war between native Syrians.  Pray for the Syrian people!  They are suffering a horrible war which is fueled from many sides whose varied interests are not, primarily, Syria or religious.

Americans are used to opening their purse during such calamities.  But, donors need first to find out proper, prudent and safe channels for monetary donations.  That Syrian Christian presence, as old as the Faith itself, is made up of people who may soon make their way into our midst.  May God help us to learn from the long-suffering Syrian people their longstanding ministry of hospitality.

September 1 (14) is the start of a new liturgical year.