The Church stands above All National and Political interests 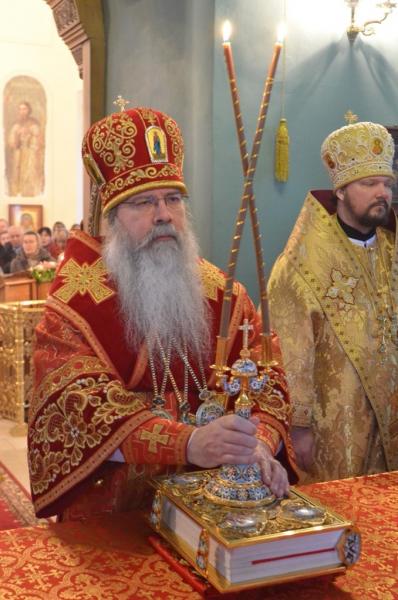 My dear brothers and sisters in Christ:

As we do every Sunday, we celebrate today the feast of the resurrection in which our Lord, as God, rose on the third day raising the world with Himself. We are also within the festal period of the Entrance of the Mother of God into the Temple, for which I was pleased to concelebrate the Divine Liturgy at the Dormition Cathedral with His Holiness, Patriarch Kirill.

It is at His Holiness’ invitation that I am making my fraternal visit to the Russian Orthodox Church in company with my delegation from the Orthodox Church in America. It is fitting that this visit, whose purpose is to give a visible sign of the communion between our churches and to strengthen our mutual understanding, should include the commemoration today of the patron saint of our Podvorie, the Holy and Great Martyr Catherine.

Saint Catherine suffered terribly during her life and was beheaded by a sword for the sake of her bridegroom, Christ. Perhaps the Mother of God did not yet know, as she entered the Temple as a small child, that she would endure the piercing of her soul by a sword, seeing her own Son suffering upon the Cross. The Mother of God and Saint Catherine both knew personally the meaning of suffering and were united in that suffering with all those who bear the Cross in anticipation of the resurrection.

This is especially worth remembering today, a difficult day in American history. December 7, 1941, is the date of the bombing of Peal Harbor and the entry of the United States into the Second World War—at a time when Russia, the United States and Canada were allies, and Russia was enduring incalculable suffering. Today, our visit to the Church of Russia takes place during a time of tension between our countries over the tragedy in Ukraine. Nevertheless, the faithful of our countries are united in our prayers for those who suffer and in our conviction that nothing can overcome the glory of the Kingdom. We are reminded that, for seventy years the suffering of believers in Russia was an example of the truth that none of the world’s evil and darkness can extinguish the light of Christ.

The Church—whatever her nationality—stands above all national and political interests, as witness to the Kingdom that is not of this world. Part of that witness is showing that people of all backgrounds can live in peace. But it takes effort, not only to be peaceful ourselves, but to resist aggression at all levels: personal, national and international.

All of the Scriptural readings for today speak to us of being faithful in the face of opposition from internal and external forces. In the Sunday Gospel, our Lord faces opposition from the religious leaders of his own people for breaking a religious rule. He heals the sick woman anyway, because He refuses to allow others to restrict His love and generosity. In the gospel for [the Feast of ] Saint Catherine, the Lord predicts to His disciples that persecution will be a normal part of their existence. They should come to terms with that reality so they are not surprised when they receive resistance and persecution even from their closest friends and family. But they should not be anxious. The Lord will be with them to strengthen them and give them the courage and words they need.

And Saint Paul, in the readings from Ephesians, reminds us all that in the face of opposition we need to understand that we are engaged in a spiritual warfare, not against flesh and blood, against other human beings, but against the forces of evil that inspire opposition to the Light. The Lord tells his disciples that “This will be a time for you to bear testimony.” But our experience tells us that every time is a time for Christians to bear testimony.

How are we to “bear testimony?” By being bearers of Christ’s light. As Saint Paul says, “Awake, O sleeper, and arise from the dead, and Christ shall give you light.” We should cling to Christ and receive light from Him through prayer, through the Scriptures and through the services of the Church. We should strive to have His light permeate us and become a part of us. We only need to make a small effort and God will do the rest. He gives us the words we need, the courage we need and the endurance we need to bear testimony. His light in us will be enough to bear witness. And when this witness begins to attract opposition, we should remember that His light is also our armor. “Therefore take the whole armor of God, that you may be able to withstand in the evil day, and having done all, to stand” [Ephesians 6:13].

This is what the Great Martyr Catherine did as we see so beautifully stated in her Troparion: ” By your virtues as by rays of the sun you enlightened the unbelieving philosophers, and like the most bright moon you drove away the darkness of disbelief from those walking in the night; you convinced the queen, and also chastised the tyrant, God-summoned bride, blessed Catherine.  You hastened with desire to the heavenly bridal chamber of the fairest Bride-groom Christ, and you were crowned by Him with a royal crown.  Standing before Him with the angels, pray for us who keep your most sacred memory.”

May the prayers of Saint Catherine and the protection of the Mother of God, may the the Light of Christ be with all of us. Amen.

“It is good to give thanks to the Lord, to sing praises to Thy name, O Most High”…

Metropolitan Tikhon on the 20th Anniversary of 9/11: Great Tragedies in Our World Call Us to Repentance

To the Clergy, Monastics, and Faithful of the Orthodox Church in America, Dear Brothers and Sisters in Christ,…

Most viewed articles
What Does It Take for Us to Have a Heart for God?152
You Are Not Alone – And Neither Is God116
Thank God at All Times106
Metropolitan Onuphry: Martyrs Are an Example of Greatest Love for God95
His Grace Bishop Alexis Returns from Visit to Russia75
Patriarch Kirill’s condolences over the death of people in a car crash in western Bulgaria72
Pastoral Message from Metropolitan Tikhon for Thanksgiving Day 202154
I Cannot Change God’s Will. Does It Mean that Prayer is Useless?5
Most popular authors
Pravmir.com team242
Archpriest John Moses (+2019)149
Archpriest Stephen Freeman116
Priest Luke A. Veronis106
Metropolitan Tikhon of All America and Canada54
Fr. Eugene Murzin5