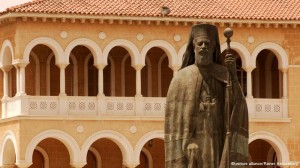 Makarios was both the political and spiritual leader of Cyprus.

To safeguard the country against bankruptcy, Cyprus wants to set up a “solidarity fund” – which the Orthodox Church has pledged to support. This reflects the centuries-old bond between church and state on Cyprus.

As Orthodox Archbishop Chrysostomos II gazed silently into the cameras, President Nikos Anastasiades of Cyprus played nervously with his fingers. During their breakfast date, they were to discuss the threat of national bankruptcy and the European Union’s bailout plan, which the Cypriot parliament intended to reject.

But the meeting also had to do with a rather generous offer on the part of the church: “The church and the cloister will make everything available in order to save the country,” declared the 71-year-old archbishop after the meeting this past week at the presidential palace. The church is even prepared to take out mortgages on its properties and loan money to the state in a bid to save it from bankruptcy.

Although outsiders may be astounded by a church offering up its property to bail out an indebted state, experts said they aren’t really surprised – among them Georgios Trantas of the Orthodox Christianity department at the University of Erfurt in Germany. Given the interweaving of church and state in Eastern and Southern Europe, collaboration between an archbishop and head of state is not unusual, Trantas said.

‘Work of the devil’

The link between church and state on Cyprus is especially close. The church involves itself in political questions both great and small, while Archbishop Chrysostomos regularly has his say in secular affairs.

The clergy in Cyprus has even taken drastic stances on political issues. When a decade ago then-UN General Secretary Kofi Annan proposed a peace plan to reunite the Greek and Turkish portions of the island, the church in its rejection called the plan the work of the devil.

Günter Seufert, of the Berlin-based German Institute for International and Security Affairs, confirmed that the church retains considerable political influence in Cyprus. Yet the Orthodox Church considers its powerful position appropriate, for reasons Seufert explained: The highest representative is traditionally elected directly by all parishioners, with rosters administrated by local priests. Since about three-quarters of the roughly one million inhabitants of the island are Orthodox, “The archbishop has the backing of the majority of the population,” Seufert said.

A scepter instead of a shepherd’s crook

High-level clerics have even taken political office. Archbishop Markarios, for example, led the island out of British rule at the beginning of the 1960s, becoming independent Cyprus’ first head of state. Bloody conflicts with the Turkish population of the island marked the time in which Markarios simultaneously held religious and political office, until his death in 1977.

Trantas emphasized that even among Southern and Eastern European countries where churches generally lie close to the state, the church in Cyprus plays a special role due to its long history.

According to the church’s own history, apostles Paul and Barnabus founded the church on the island of Cyprus in A.D. 45. The First Council of Ephesus of the early Christian Church granted the organization broad autonomy in 431, and a short time later, the Byzantine emperor granted the Cyprus archbishop what could be considered quite extensive rights for the time.

From then on, the archbishop of Cyprus was allowed to carry a scepter instead of the standard shepherd’s crook – Chrysostomos II takes with him this symbol of worldly power on his visits to see the Cypriot head of state.

The issue is ultimately about command – and cash. The Cyprus church reigns over a vast economic empire that has grown over time, and has even been maintained through foreign rule, thanks to certain arrangements the church made with occupying forces.

“During Ottoman rule, the churches on Cyprus were responsible for collecting taxes,” Orthodox expert Trantas said by way of example.

There’s sparse information as to just how much the church is worth, although experts believe that the organization is among the largest property owners on the island. In addition, the church is the minority shareholder of the Hellenic Bank – the third-largest credit institution on Cyprus – and also has an interest in a brewery.

A bank crash or economic crisis would greatly damage the church. This is why Seufert is convinced that the promise of assistance from the archbishop amounts to more than mere lip service. “I think there’s a concrete intention to negotiate behind it,” Seufert said.