Confession: The Sacrament of Repentance and Reconciliation

Sometimes people come to Confession purely to discuss their spiritual development, but again this misses the point of Confession as the Sacrament of Repentance. Perhaps some people do this because they feel it is the only way to find time to talk seriously and at length with the priest. While the discussion of spiritual life is not unsuitable for Confession, it is better (unless there is something to confess) to set time aside apart from Confession to discuss such matters.
Archimandrite Vassilios Papavassiliou | 14 April 2011

Few would argue against the statement that the Sacrament of Confession is on the decline in the Greek Orthodox Church. While it is not my intention here to explain the reasons for it, one could speculate that this decline is due to the morally and spiritually lax standards of our modern society to which we have become accustomed. Perhaps sins which in the past would have given rise to a sense of regret and a desire to be forgiven now seem to us to be normal. This decline may also be due to the individualistic attitude of modern society which has influenced Christians also, and which extends even into the area of religion. What I mean by this is that individualism results in the belief that there is just ‘me and God’, and there is no need for any ‘middle-man’, no need for priests or even a church. I can not attempt to respond to this view here.

Confession is the most common term for the sacrament in question, but it is also (perhaps more correctly) known as ‘The Sacrament of Repentance and Reconciliation’. I think that this better sums up the nature of Confession, and reveals something of its original purpose. The Sacrament of Confession was originally and still is a sacrament by which those who have been ex-communicated (not necessarily formerly, but have committed sins which have made it impossible to participate in Holy Communion) are reconciled to the Church and brought back into communion with the Body of Christ.

The second century Christian work, ‘The Shepherd of Hermas’, informs us that only one Confession was permitted after baptism:

“Whoever is tempted by the devil and sins after that great and reverent calling (baptism) has one repentance. But if he should sin and repent repeatedly it is of no benefit to him”.1 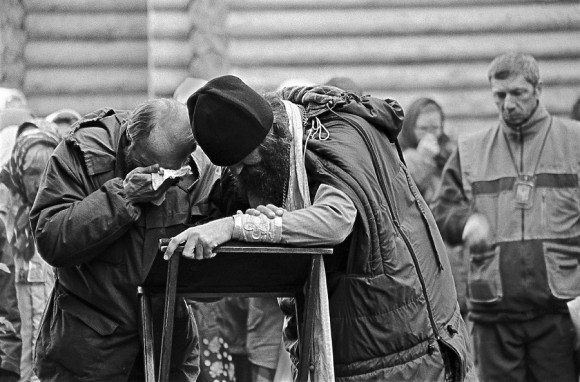 As a result, Confession has taken on this double character of sacramental absolution and spiritual counselling. Confession, therefore, should not be seen purely in terms of confessing sins and receiving forgiveness, but also in terms of spiritual development. We often find ourselves committing and confessing the same sins again and again, and so we need help to overcome our sins and passions, as well as advice in regards to dealing with spiritual and moral dilemmas and other difficult situations erected by our modern life-styles. It is therefore particularly beneficial for anyone who takes the spiritual life seriously to have a confessor who is capable of acting also as a spiritual father, a mentor or guide, who will help him to progress in the spiritual life. This is just as important for the clergy as it is for the laity. The clergy are often dealing with a variety of problems and challenges relating not only to their own spiritual life, but also to their ministry. It is important for a priest, however experienced or knowledgeable, to have another priest to refer to and confess to.

Who is able to act as confessor depends on the bishop’s discernment. In many places in Greece, the bishop selects certain priests and appoints them as confessors through a special prayer and the ‘laying on of hands’. Archbishop Gregorios of Thyateira and Great Britain allows all priests to act as confessors without any particular prayer of appointment. Regardless, no one can act as a confessor without the blessing of the bishop, for he is the spiritual father par excellence of all those under his jurisdiction, clergy and laity alike.

The ideal is that the confessor/spiritual father should be a priest with whom the spiritual child can easily have regular contact – if not the local parish priest, then at least a priest who lives in the same city or town. It is however a sad reality that some priests seem to have never been to Confession themselves and therefore do not know what is supposed to happen at Confession or how to advise people in Confession. There is no special training in the Orthodox Church for hearing Confessions, and for good reason, but much can be learned from the experience of going to Confession.

In the Orthodox Church Confession is done face-to-face. There is no such thing as a Confessional Box in the Orthodox Church. Confession can take place in any suitable place in the church. This more personal approach is more of a help to Confession than a hindrance. It is one thing to disclose your sins to a wall knowing that someone is listening. It is another thing to sit in full view of someone – even if you can not look him in the eye – someone who is himself a sinner, and admit to what you are and what you have done. This helps us to humble ourselves and to break the false image of ourselves that we all entertain.

There does appear to be, particularly among older people, a serious misunderstanding of the purpose of Confession. Some seem to think that the purpose of Confession is to confess one’s virtues (and then to be absolved of those virtues!). Others seem to think it is a private chat (or even gossip) with the priest. Others seem to think that it is simply the necessary Lenten ‘obligation’ by which the person can fulfil his or her other annual ‘obligation’ to receive Communion, and there is interest only in the prayer of absolution and no real interest in the act of confession itself.

There is among other people another distorted understanding of Confession, which is that Confession is little more than making a list of wrong-doings without any consideration for the importance of sincere repentance. This approach to Confession is particularly strong in churches where en-masse Confessions are carried out during the course of the Liturgy because Communion for laity is regarded (very wrongly) as impossible without it. Repentance is, in fact, the necessary pre-condition for Confession, and so Confession should be preceded by reflection and contrition. Heartfelt Sacramental Confession is the natural response to sincere repentance, and is thus the fruit and seal of that repentance.

There seems to be among some people the idea that Confession is meaningless if we later commit the same sins, and that repentance is of no value unless the sins which we feel regret for come to an end once and for all. This is, to put it mildly, a very cold and rational approach to repentance and Confession. We would do well to remember the words of the psalm: “A sacrifice to God is a broken spirit; a broken and humbled heart God will not despise”,3 and the parable of the Tax Collector and the Pharisee, in which we are told that the Tax Collector leaves the Temple justified because he dared not even raise his eyes to heaven, but smote his breast and pleaded, ‘have mercy on me, a sinner’.4 For sure, one of the purposes of Confession is, as I said, spiritual development, but the sincere expression of contrition for our sins is even more important. I prefer someone who keeps coming to Confession in tears to confess the same grievous sins to somebody who comes to Confession with self-satisfaction and confidence because he has only ‘little sins’ to confess.

Sometimes people come to Confession purely to discuss their spiritual development, but again this misses the point of Confession as the Sacrament of Repentance. Perhaps some people do this because they feel it is the only way to find time to talk seriously and at length with the priest. While the discussion of spiritual life is not unsuitable for Confession, it is better (unless there is something to confess) to set time aside apart from Confession to discuss such matters. Perhaps this need to use Confession as a pretext for discussion with the priest is a result of the failure of our priests to rise to the challenge of acting as spiritual fathers to their flock. Priests are sometimes ever-so-busy with things which are, quite frankly, of secondary importance. The liturgical, sacramental and spiritual life should always be the first priority of both clergy and laity alike, both married and unmarried.

What we need, then, is a real rediscovery of the spiritual character and content of church life, a deep understanding in heart, soul and mind of our calling to come into union with God. Like the Prodigal Son,5 we need to recognise our alienation from God, our sinfulness, our distance from our true home and calling. And we need to understand that this home is our Church, and we always need to return home, we always need to be reconciled with God and with the body of believers that is the Church. Confession is therefore necessary for us to continuously rediscover our identity as Orthodox Christians.

Source: The Archdiocese of Thyateira and Great Britain