MOSCOW, December 19 (RIA Novosti) – Russian President Vladimir Putin on Thursday described his support for traditional values as being motivated by a growing need to defend Russia from “aggressive” minorities. 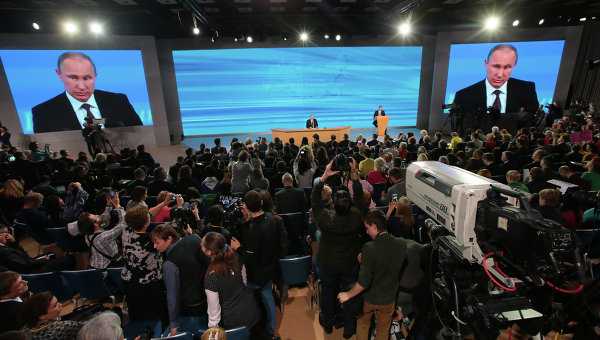 “It’s not the criticism of Western values that is important for me. For me, it’s important to protect our society from certain quasi-values, which are alien for our citizens,” Putin said at a marathon annual press conference.

Putin talked about certain social groups “not just living the way they want, but also imposing their views on [people in] other countries, and doing it in a quite aggressive manner.”

Russia has coming under growing international condemnation over a recently approved law outlawing propaganda of homosexuality among minors that rights activists say has had a chilling effect on the gay, lesbian, bisexual and transsexual community.

Putin has actively promoted traditional values in close cooperation with the Russian Orthodox Church since his third election victory was marred by intense public protests.

Socially conservative Russians traditionally make up the bulk of Putin’s support base.

The Kremlin often sets traditionalism and conservative values in opposition to Western lifestyles, which it typically describes as decadent and harmful to the Russian society.