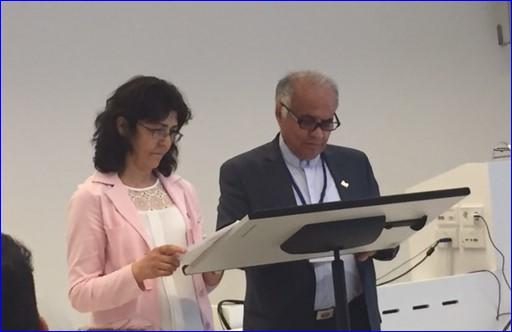 AINA (Berlin) — Yonathan Betkolia, the Assyrian representative in Iran’s parliament and general secretary of the Assyrian Universal Alliance, delivered the opening speech on Wednesday at the academic conference at the Free University of Berlin.

The four day conference, titled Surviving in the Shade: History, Language and Culture of Syriac-speaking Christianity, was organized by the Institute for Semitistic and Arabistic of the Free University of Berlin under the guidance of Prof. Dr. Shabo Talay. More than 60 scholars presented their research results on various topics related to Syriac Christianity.

According to the organizers, recent developments in the Middle East and the increasing interest in Christianity of Asia has made Syriac Christianity a more popular research topic again. Several churches with origins in the Middle East attribute their tradition to Syriac Christianity: the Holy Apostolic Catholic Assyrian Church of the East, the Syriac Orthodox Church, the Syriac Catholic Church, and the Chaldean Church of Babylon.

After a German welcoming speech by Prof. Talay, Mr. Betkolia delivered a speech in the Assyrian language which was translated to German by Dr. Helen Younan-Sardaroud. In his talk, Mr. Betkolia briefly touched on the long history of the Assyrians people, “who have left their mark on the history of the country in fields such as science, literature, and medicine since three millennia.” As an example, he pointed to the Academy of Gundishapour, which “commanded the most famous teaching hospital of its time, and where many scholars and philosophers graduated.”

“After the revolution, the Assyrians, Armenians, Zoroastrians, and Jews were recognized formally as minorities and, like all Iranians, received equal rights,” said Mr. Betkolia. “According to Article 13 of the Iranian Constitution, they are recognized as official ethnic minorities who can exercise their religious and cultural traditions within the framework of Iranian law. Under Article 13 of the Constitution, five parliamentary seats are reserved for minorities. For Jews, Zoroastrians and Assyrians one seat each, for the Armenians two seats. These are each chosen from within the respective communities.”

According to Mr. Betkolia, minorities have the right to teach their own language, and in the framework of the law, practice their religious traditions and celebrate their annual festivities. He also said that more than 90 Churches from early times of Christianity have been renovated by the state and saved from decay.

In closing Mr. Betkolia expressed gratitude to Prof. Shabo Talay as organizer of the conference for inviting him to participate and speak in this event.