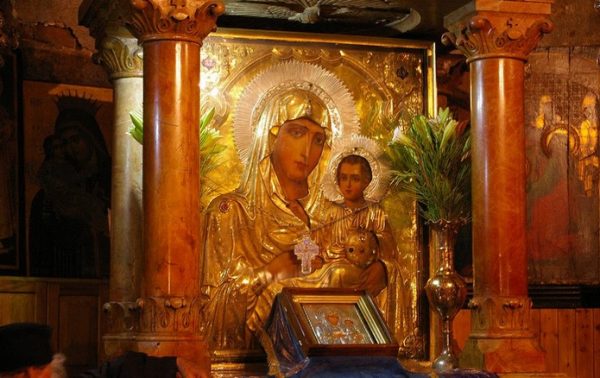 The most revered icon of the Mother of God at Ascension of the Lord Convent on the Mt of Olives, Jerusalem, is known as “Quick to Hear of Eleon.” The large image, painted on canvas, was brought by Russian pilgrims to the convent before World War I.

This icon, painted in the Chernigov style, having darkened over time, was placed in the unfinished St Philaret Refectory Chapel. It began to serve as a great source of consolation for the nuns, who in those years endured all kinds of sorrows. Many tears were shed before the holy image by the orphaned residents of the monastery during the war, and many were rewarded with divine help.

It was then that this icon was given the name “Quick to Hear of Eleon” (Eleon is the local name for the Mt of Olives).

The beloved image, which exudes a palpable blessing to those who pray before it with humble heart, was in 1919 taken via procession of the cross to Ascension Church, which had been sealed off for the five previous years. When the icon was brought inside the temple, it suddenly and miraculously brightened, shedding the dark patina that had built up over many years—the face brightened and the colors became more vivid.

The miraculous icon was placed in a wooden frame specially carved for it, with golden columns and ornamentation. The nuns embroidered veils for it with pearls and precious stones to honor the Mother of God and Her Divine Child.

November 9/22 was established as the feast day of the Icon of the Mother of God “Quick to Hear of Eleon,” coinciding with the icon of the same name on Mt Athos.

Archimandrite Roman (Krassovsky), Chief of the Russian Ecclesiastical Mission in Jerusalem, performed all-night vigil the night before, during which, after the 6th Canon, an akathist to the icon was performed. Divine Liturgy was celebrated on the feast day, when Fr Roman was joined by other mission clergymen.

A procession of the cross then took place, followed by a festive trapeza luncheon.