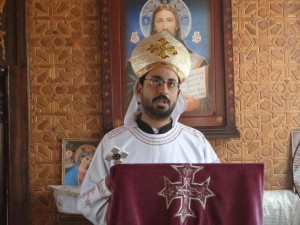 The priest, Mina Aboud Sharween, was attacked in the early afternoon while walking in the Masaeed area in El Arish.

The shooting in the coastal city was one of several attacks believed to be by Islamist insurgents that included firing at four military checkpoints in the region, the sources said.

The violence follows attacks in which five police offers were killed in El Arish on Friday.

Mursi’s Muslim Brotherhood has fiercely criticised Coptic Pope Tawadros, spiritual leader of Egypt’s 8 million Christians, for giving his blessing to the removal of the president and attending the announcement by armed forces commander General Abdel Fattah al-Sisi suspending the constitution.

Most viewed articles
Our Lenten Journey112
The Heart of the Scriptures107
Serbian Patriarch Porfirije Gives Interview to Serbian National Television85
Patriarch Kirill Speaks on the Only Right Path72
Metropolitan Onuphry: Fasting and Prayer Are Two Wings That Help People Draw Near God66
Metropolitan Hilarion: Real People in the Virtual World of the Internet Also Need to Hear the Word of a Priest63
Reading the Bible Has Given Christians Hope During the Pandemic – Survey35
Bishop Benedict of Bistrița in Relation to Young People: I Want to Be One of Them35
Moses and the Ten Words26
In Church and at Home: Liturgical Resources for Great Lent7
Most popular authors
Pravmir.com team321
Priest Luke A. Veronis112
Frederica Mathewes-Green107
Aurelian Iftimiu35
Archpriest Lawrence Farley26
Peter Samore7