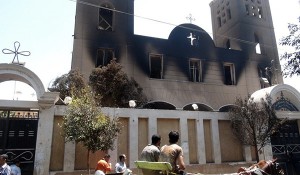 The millions of Egyptians, Muslim and Christian, who took to the street in peaceful protest over a month ago understood well the consequences of crossing the Muslim Brotherhood. “So much violence, so many innocent people killed,” says Mina Thabet, an Egyptian human-rights activist who lives in Cairo. “The [Mohamed] Morsi supporters are armed and killing people in the streets. They are targeting Copts. But if the Muslim Brotherhood had remained in power, we would have the same violence and much more because he would use the institutions of the country, the army and the police, against us.”

The Muslim Brotherhood is using violence to terrorize Egypt, claiming the lives of hundreds of Egyptians, many of whom were Christian. In the violence that erupted on Wednesday and Thursday, 32 churches were destroyed and 19 severely damaged, according to the Maspero Youth Union, a Christian human-rights organization. Scores of Christian homes, businesses, and automobiles were destroyed — all of this in roughly 24 hours.

And yet, bizarrely, Western media have largely portrayed the Muslim Brotherhood as the victims of violence. Egypt’s moderates are not persuaded that the brutality of the Muslim Brotherhood’s partisan paramilitaries is a sign that the Morsi regime should have remained in power. “The violence would come one way or the other,” Thabet observes. “No, I have no regrets.”

Many Egyptians believe that Morsi was on a path to radicalize Egypt’s government, judiciary, and military, and that if the Muslim Brotherhood had not been stopped, it might have been decades before the Islamist regime was dislodged. This has forced secular-leaning Egyptians to accept the lesser of two evils, martial law.

The military has been slow to respond to civilians’ desperate pleas for help. Even before this week’s violence, the Egyptian government was unable — or, perhaps more accurate, unwilling — to take basic steps to protect Egypt’s Christians or their churches, which are a particular target of the Muslim Brotherhood’s attacks. Still, Copts have no question which is the lesser of two evils.

They also have a strong sense of betrayal by the West and America. Having struck a blow for freedom at considerable personal cost and in the face of significant odds, the millions of Egyptians who took part in the June 30 Revolution are confounded by the Western reaction. “I don’t know why the American media did this. It is terrible,” said Thabet. One liberal American missionary who has lived in Egypt for several decades was irate in an e-mail message. “Christians here are getting hit hard. . . . I am thoroughly [upset] at the hypocrisy of the EU and the U.S. What whores we have running the world. I can only say worse things about western news coverage in general.”

They are angry that the peaceful, nonviolent protests, which set in motion events that led to the removal of Morsi, have been largely condemned in the West, while the Muslim Brotherhood, perpetrators of heinous acts of violence, have been portrayed as victims. “The Muslim Brotherhood is armed,” says Thabet. “We are not armed.” The violence of recent days seems to confirm that the Muslim Brotherhood was bent on violence all along and was not an organization that, as Robert Kagan recently asserted, “renounced violence and terrorism years ago.” In the aftermath of this week’s atrocities, Mr. Kagan ought to be force-fed his words.

In 2011, Christians had been reluctant to see Hosni Mubarak removed. This prompted claims among the many 2011 revolutionaries that Christians were not invested in reform. In 2013, Christians stood with the rest of Egypt’s revolutionaries in a united front numbering upward of 20 to 30 million. “Copts had a big role in this revolution, in the street like everyone else,” says Thabet. “Not like last time, when they say we were not there. The Christians fasted with the Muslims during Ramadan. It was very good. It brought unity.”

The 2013 revolution had broader popular and institutional support, including from the military, the police, the judiciary, the Muslim clerics of Al Azhar Mosque, and the Coptic Orthodox Church. More to the point, the 2013 revolution was peaceful. The Muslim Brotherhood took to the streets in the revolution’s aftermath and inflicted violence, bloodshed, and terror on their countrymen. Christians have paid most heavily. Even before this week’s attacks, systematic violence against Egypt’s Christian community was escalating (a priest was murdered; a ten-year-old Coptic girl was shot and killed; a businessman was beheaded). Now scores of Christian homes, businesses, and churches have been destroyed.

The Muslim Brotherhood’s systematic and coordinated attacks against Christians in Egypt are reminiscent of Kristallnacht in Germany in 1938, when Nazi paramilitaries systematically vandalized Jewish homes, businesses, and synagogues and murdered scores of Jews in a disturbing foreshadowing of the fate of European Jews over the next few years. It is no accident that many Jews, including Barry Rubin and Jeffrey Goldberg, have been quick to raise the alarums over the persecution of Christians: They recognize the dangerous signs. “They have hatred in their hearts,” says Thabet of the Brotherhood, echoing observations commonly made of the National Socialists in 20th-century Germany.

When the Nazis sensed that the war was unwinnable, they put all of their organizational energies into the “final solution.” Though most Jews were defenseless non-combatants, the Nazis felt that they should not be left behind to stand over the grave of National Socialism. One senses that same hatred and desperation as the Muslim Brothers respond to the military’s crackdown by attacking defenseless Christians. We may be thankful that the Muslim Brothers lack the organizational skill of the Nazis, but it appears they lack none of their hate.

“You have fought to get democracy as you now have it,” says Thabet. “We are fighting for our own democracy. That is what you are seeing now.” If freedom and stability are restored to Egypt, it will be despite, not because of, the West.

— Andrew Doran served on the executive secretariat of the U.S. National Commission for UNESCO at the U.S. Department of State. His views are his own.