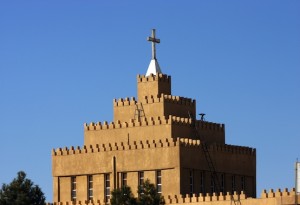 The recent dedication of George W. Bush’s presidential library in Texas briefly rekindled debate about the defining event of his presidency, the Iraq War. The visceral hatred of many for the war and the man having substantially diminished, a more sober assessment of both seemed to prevail in the coverage. In the same news cycle there appeared a seemingly unrelated event, the abduction of two Orthodox bishops in Syria. In fact, the conflict in Syria and the American invasion of Iraq are linked by a common thread:  the failure of the U.S. to consider the effect of its foreign policy on vulnerable religious communities, especially Middle Eastern Christians.

In March 2003, on the eve of war in Iraq, Pope John Paul II dispatched Cardinal Pio Laghi, a senior Vatican diplomat, to Washington to make a final plea to Bush not to invade. Laghi, chosen for his close ties to the Bush family, outlined “clearly and forcefully” the Vatican’s fears of what would follow an invasion: protracted war, significant casualties, violence between ethnic and religious groups, regional destabilization, “and a new gulf between Christianity and Islam.” The warning was not heeded.

Two weeks after the Bush-Laghi meeting, on March 19, 2003, Operation Iraqi Freedom commenced. Shortly after combat operations concluded on May 1, the real conflict began. Amid the chaos and sectarian violence that followed, Iraq’s Christians suffered severe persecution. Neither the military nor the State Department took action to protect them. In October 2003, human rights expert Nina Shea noted that religious freedom and a pluralistic Iraq were not high priorities for the administration, concluding that its “diffidence on religious freedom suggests Washington’s relative indifference to this basic human right.” Shea added, “Washington’s refusal to insist on guarantees of religious freedom threatens to undermine its already difficult task of securing a fully democratic government in Iraq”—more prescience that would be likewise disregarded.

Iraq’s diaspora Christian community in America had also foreseen the danger, and quickly took action, helping thousands of refugees with humanitarian assistance. The Chaldean Federation’s Joseph Kassab, himself a refugee from Baathist Iraq decades before, advocated zealously for their protection. Kassab’s brother, Jabrail, a Chaldean archbishop, helped organize relief in Iraq during the sanctions from 1991-2003, doing “all that he could to help the Iraqi people—Christians and Muslims together.” His brother remained at his post until October 2006, when a Syrian Orthodox priest, Fr. Paulos Eskander, was abducted and beheaded, after which Pope Benedict ordered him to leave Iraq. Fr. Eskander’s murder was part of a campaign that targeted the most conspicuous of Christians—the clergy.

In February 2008, Archbishop Paulos Rahho’s vehicle was attacked after he finished praying the Stations of the Cross in Mosul. His driver and bodyguards were killed. Rahho, wounded but alive, was put into the trunk of the assassins’ car and taken from the scene. He managed to pull out his cell phone and call his church to tell them not to pay his ransom, saying he “believed that this money would not be paid for good works and would be used for killing and more evil actions.” His body was found in a shallow grave two weeks later.

During this campaign of systematic violence, the U.S. military provided no protection to the already vulnerable Christian community. In some instances, the clergy went to local American military units to beg to for protection. None was given. As Shea noted two weeks later, the administration and the State Department—whose record on Christian minorities and religious freedom leaves much to be desired—still refused to “acknowledge that the Christians and other defenseless minorities are persecuted for reasons of religion.”

A month after the murder of Archbishop Rahho, President Bush addressed the National Catholic Prayer Breakfast in Washington, D.C.  Joseph Kassab had been invited to pray the Hail Mary and Our Father in Aramaic following Bush’s remarks, an act of solidarity with the Christians of the Arab world. “I had two or three minutes with the president behind the curtains,” Kassab said in a recent interview. “He said he thought you had to fix the whole picture before coming to the other elements. It was disappointing. He knew it was a failure and his administration refused to acknowledge that.”

Rosie Malek-Yonan, an Assyrian Christian who testified before Congress, would call the Bush administration a “silent accomplice” to “incipient genocide.” Anglican Canon Andrew White of Baghdad’s Ecumenical Congregation captured the reality with blunt precision: “All of my leadership were taken and killed—all dead.”

Those Iraqi Christians who fled to America would fare little better in seeking asylum. Many Chaldeans and Assyrians were detained, until their cases were heard, in what an attorney familiar with Chaldean-asylum cases describes as “prisons,” adding that she “never worked on a case where a Chaldean was granted asylum, but I heard that it happened.” Throughout these deportation proceedings, the administration and the State Department steadfastly refused to recognize the conditions—which the U.S. had helped to bring about—as “persecution.” In consequence, most were deported.

Ironically, hundreds of thousands Iraqi Christians would find refuge in the quasi-autonomous republic of Kurdistan in the north. “They arrived,” Kassab would note, “with nothing on their backs and the Kurds came to the rescue.” Traveling to the region to assist with resettlement efforts, Kassab observed a Kurdish government willing despite inadequate resources to help the fleeing Christians. The Kurds went to the U.S. government, which they believed was partly responsible for the refugee crisis, to ask for help. “This fell on deaf ears,” Kassab recalls.

Today Iraqi Kurdistan is assimilating refugees from another neighboring country torn apart by sectarian violence: Syria. Among the refugees are more Iraqi Christians, who originally fled to the relative freedom and tolerance of Syria, only to find themselves again fleeing persecution, often hunted by Syria’s rebels. Many of these rebels are members or affiliates of Osama bin Laden’s al-Qaeda network. The Obama administration, bewilderingly, has chosen to support Syria’s rebel groups without any apparent thought of the consequences. The extent of covert support remains unclear, though reports suggest it is significant. As in Iraq, the insurgent campaign in Syria targets priests, the most visible symbols of the Christian faith.

The protection and perseverance of minority religious communities—indeed, of religious freedom—continues to be a low priority for the Obama administration and the State Department.  The U.S. fails to recognize that the Islamist-Wahabbist commitment to eradicating Christian minorities today will result in the extinction of diverse modes of Islam tomorrow, a fact that is not lost on moderate Muslims.

The objective of the Iraq War—to democratize the Middle East—may yet be realized. But democracy in the Middle East is proving less tolerant than the regimes it has succeeded. Unless swift action is taken, these democracies will evolve into bastions of intolerance and violence beyond our comprehension. These democracies will not march ineluctably toward liberty and pluralism, as some naïve optimists continue to forecast despite the evidence, but will end in the ordered barbarism of Saudi Arabia, where punishments include beheading and crucifixion, according to Amnesty International.

When he came to office, President Bush famously scribbled in a report on the Clinton administration’s inaction during the Rwandan genocide, “Not on my watch.” Clinton today admits that inaction in Rwanda is his greatest regret. One day, Bush may look back on the neglect of the Middle East’s Christians with similar regret. Cardinal Laghi would recall that Bush “seemed to truly believe in a war of good against evil,” that his work was providential. “You might start, and you don’t know how to end it,” the prelate warned. In this sense, the Iraq War continues, and with it the deliberate extinction of Middle Eastern Christians.

Andrew Doran served on the Executive Secretariat of the U.S. National Commission for UNESCO at the U.S. Department of State, where he has since worked as a consultant. His views are his own.

August 19, 2103 The millions of Egyptians, Muslim and Christian, who took to the street in peaceful protest…