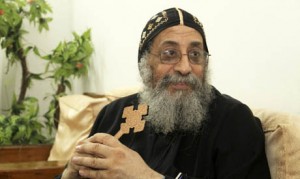 In a meeting with 20 members of the Shura Council on Tuesday, Coptic Orthodox Pope Tawadros II urged for legislation that would protect Egypt from sectarian strife.

“The recent events have wrung the hearts of both Muslims and Christians,” said the Pope who further praised the role of moderate Muslims who abide by the law and distance themselves from extremists, adding however that “good sentiments are not enough.”

The Shura delegation was visiting the pope to send their condolences to the victims of the violence in Al-Khosous and at St Mark’s Cathedral earlier this month.

Four Christians and one Muslim were killed during the initial outbreak of fighting, in the town of Al-Khosous, north of Cairo.

During the funerals of the Christians at St Mark’s Orthodox Cathedral in Cairo on Saturday, 7 April, two more people were killed and at least 90 injured when unknown assailants attacked mourners.

According to Wafd member Nadia Henry, who attended Shura Council meeting, the pope said that one way of fighting sectarianism would be the immediate issuing of a unified law regulating houses of worship.

The law was promised in 2011 by the then-ruling Supreme Council of Armed Forces, but was never passed.

Coptic Christians have long demanded fairer regulations in relation to the building and enlarging of churches, which are subject to tight restrictions.

According to the Ministry of Religious Endowments, Egypt has over 92,000 mosques. The number of churches of all denominations is estimated at around 2,500.

At least five incidents of sectarian violence have taken place since President Morsi took power in July 2011, according to a statement by Human Rights Watch.