Metropolitan Hilarion of Volokolamsk, chairman of the Moscow Patriarchate’s Department for External Church Relations, sends a message to Patriarch Mar Ignatius Zakka I Iwas of the Syrian Orthodox Church, in which he notes that this extremist act is aimed to intimidate Syrian Christians and to expel them from their native country. The text of the letter is given below. 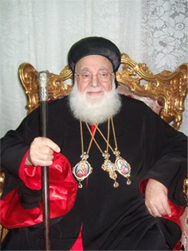 I was grieved to learn about the abduction of two hierarchs of the Christian Churches of Syria, Metropolitan Mar Gregorios Yohanna Ibrahim and Metropolitan Boulos.

We have again become witnesses of an extremist act aimed to intimidate Syrian Christians and to expel them from their native country. It is deplorable that those in positions of power prefer not to notice anti-Christian character of the actions of so-called “rebels”, supporting them and thus encouraging them to commit such brutal actions in future.

The Russian Orthodox Church unceasingly raises her voice in the international arena in defense of her brothers and sisters in Syria, subjected to constant attacks from armed mercenaries who sow evil, death and terror in the Syrian land. We will continue our struggle until peace is re-established in Syria.

May the All-Merciful Lord grant the soonest release to the abducted hierarchs and peace to the Syrian people.