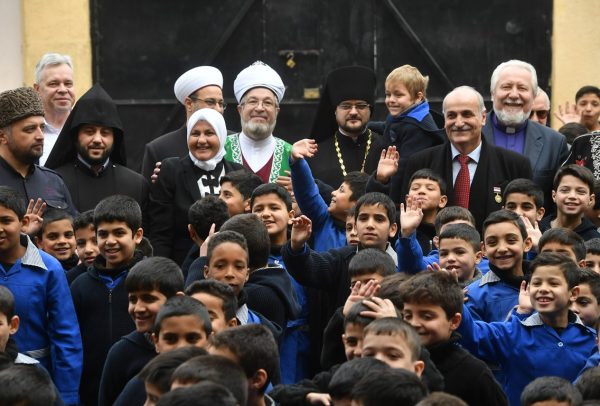 On 5 February 2018, the delegation of the Interreligious working group of Russia’s Presidential Council for Cooperation with Religious Organizations continued its visit to Syria.

In Damascus, the delegation members visited an orphanage acting under the auspices of Syria’s Ministry of Awqaf, and a boarding school for children of soldiers killed in action, which is in the charge of the Ministry of Defense of the Syrian Arab Republic.

Humanitarian aid (several hundreds of boxes with foodstuff kits) was delivered to both institutions. The delegation members also gave out sweets and chocolate to the children.

Most of the children have neither father nor mother. Many of them saw militants kill their parents. Dreadful scenes of terrorists’ atrocities witnessed by the children beggar description. The little Syrians have severe psychological traumas, and it will require a lot of effort to help them recover. With sincere love and warmth, the Syrian children responded to the kind attention devoted to them. They declaimed poems and sang songs, including those in Russian. However, smiles on their faces could not hide the traces of tragedies they had suffered. The representatives of the Russian religious organizations discussed with the heads and teachers of these two institutions various programmes of rehabilitation for their pupils greatly affected by the war.

A consignment of humanitarian aid was also sent to an orphanage of the Patriarchate of Antioch. That day it was impossible to visit the orphanage due to the more dangerous situation in Damascus: the city centre was under bombardment. Among terrorists’ targets was the cathedral of the Orthodox Church of Antioch and two of the stations where the humanitarian aid collected by the Russian religious communities was being distributed.

That same day the interreligious delegation from Russia visited the Patriarchate of the Syrian Orthodox Church. On behalf of His Holiness Patriarch Mor Ignatius Aphrem II, his vicar Bishop Mor Timotheos Matta Al-Khoury received the guests. The head of the Syrian Orthodox Church was at that time on an archpastoral visit to the city of Deir ez-Zor, where several days before the first liturgy had been celebrated after the siege had been raised. Among those who attended the service were Christians of different confessions and Muslims who wanted to demonstrate that principles of interfaith peace and mutual understanding, according to which Syria lived for centuries, were inviolable.

Bishop Matta expressed his condolences over the death of the Russian pilot, Roman Filippov, and thanked Russia and the Russian Orthodox Church for their invaluable help to the people of Syria. Particular greetings were conveyed to His Holiness Patriarch Kirill of Moscow and All Russia, whose name is said by the Syrian Christians with love and sincere gratitude for unwavering support.

Later that day the delegation members paid a visit to the Grand Mufti of Syria, Ahmad Badreddin Hassoun, and to the Russian Embassy in Damascus, where they met with Mr. Alexander Kinshchak, Ambassador Extraordinary and Plenipotentiary of the Russian Federation to the Syrian Arab Republic. 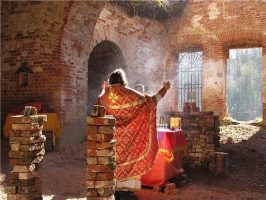 “Terrorist attacks killed 50 parishioners of our church. Everyone is afraid of death. If you are…