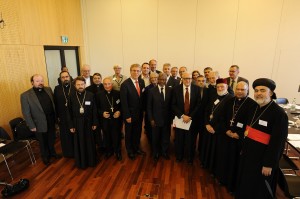 On 18 September 2013, a one-day Consultation on the Syrian crisis, organized by the World Council of Churches, took place in Bossey, Switzerland. Participating in the meeting were representatives of the Christian Churches of Syria and other countries which have taken an active part in the efforts to overcome the crisis. Among the participants were also Mr. Kofi Annan, former UN Secretary-General; Mr. Lakhdar Brahimi, UN Joint Special Representative for Syria; and representatives of other international organizations.

Taking part in the consultation on behalf of the Russian Orthodox Church was Metropolitan Hilarion of Volokolamsk, chairman of the Moscow Patriarchate’s Department for External Church Relations. Among the participants was also Archpriest Mikhail Gundyaev, representative of the Russian Orthodox Church at the World Council of Churches and international organizations in Geneva.

The participants in the meeting were called to analyze the situation in the Syrian Arab Republic and try to find possible ways for the WCC member churches to take joint actions to settle the situation.

In his address, Mr. Kofi Annan said he saw no possibility for a military solution to the Syrian problem. Mr. Annan appreciated Russia’s initiative aimed at solving the problem of chemical weapons in Syria and preventing a military strike, and emphasized that Russia and Syria alone, making joint efforts and using their authority and influence, might make the warring parties to begin negotiations. Many speakers repeatedly emphasized the necessity to convoke the Geneva II Conference as soon as possible.

Representatives of the Syrian Churches presented numerous evidences of sufferings that have befallen the Syrian Christians. The number of Christian families fleeing the country is constantly increasing. There is a real danger of total extermination of the Christian presence in Syria, a country with rich centuries-old Christian history.

Metropolitan Hilarion of Volokolamsk read out the letter sent by His Holiness Patriarch Kirill to US President Barack Obama. The main topic of the letter was the prevention of military strike on Syria. The DECR chairman spoke in detail about the work the Russian Orthodox Church has been carrying out to improve the situation in Syria and to ease the sufferings of the Syrian people. “At a time when we were invited to this consultation, many felt desperate,” Metropolitan Hilarion said, “We did not see any solution to the situation in Syria. Now we have a hope. It is a very important moment for all of us to think over the steps to be taken next to achieve peace in Syria…”

The DECR chairman emphasized that the Russian Orthodox Church has maintained cooperation with the Russian leadership in order to find a peaceful solution to the Syrian problem. “We are glad to see that this cooperation has yielded its fruit,” His Eminence said. Metropolitan Hilarion also expressed the hope that the Geneva II Conference would be convened in the nearest future and that a reliable political solution for Syria would be found. His Eminence Metropolitan Hilarion called on Christian Churches all over the world to exert influence on the governments in their countries in order to prevent all parties from searching for military solutions again.

The participants in the meeting have adopted a Communiqué which reflects their common vision of the situation in Syria and possible ways to solve it. «We believe there can be no military solution to the crisis in Syria,” the Communiqué reads, “It is time for the international community to assume its responsibility to end the violence and initiate a political process that brings peace for all the people of Syria. Resolute action now is necessary to save lives… Christians in Syria are an integral part of a diverse society with a rich history… Churches must continue to raise their voice in their congregations and with their governments. We must strengthen the public outcry so that those in power will protect the common interest of humanity.”