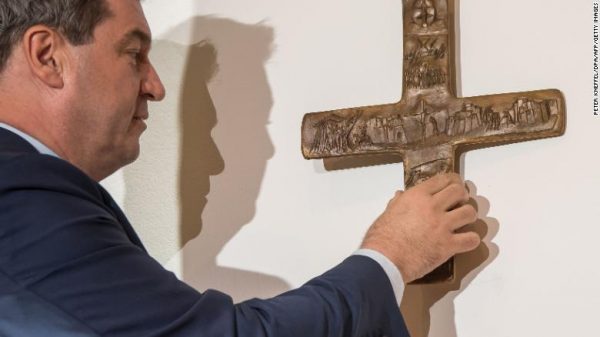 Berlin. June 1. Interfax.  A decree on the placement of a Christian cross image at the entrances to most public buildings was enacted on Friday in the German Federal State of Bavaria, as reported by the German press.

Markus Zeder, Bavarian Prime Minister who initiated this decree in April, said that “the crucifix is a fundamental symbol of our Bavarian identity and way of life”.

However, according to the media, this decree gave rise to controversies and criticism against Mr. Zeder.

As pointed out by a number of political experts, in the October Regional Parliamentary elections his Christian Social Union (CSU), a political party that is in fraternal relations with Christian Democrats led by Angela Merkel, will compete with “Alternative for Germany” (AfD), the right-wing populist party that is against the influx of migrants from the Islamic countries. Thus, political experts believe that this decree should gain sympathy among AfD supporters and draw them to the CSU’s side.

The media recalled that in 2017 several terrorist attacks occurred in Bavaria, some of which were staged by Muslim migrants.