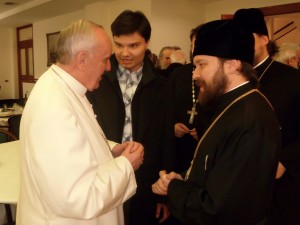 Members of the delegation were accommodated at the House of St. Martha, where the new Pope is residing. A short meeting with Pope Francis took place at the refectory. The Pope warmly greeted Metropolitan Hilarion who introduced members of the delegation and conveyed cordial best wishes to Pope Francis from His Holiness Patriarch Kirill of Moscow and All Russia. The Pope said that he had offered special prayers for Patriarch Kirill at the divine service as it is a commemoration day of St. Cyril of Jerusalem according to the Julian calendar. He thanked Metropolitan Hilarion for the exhibition of Russian icons held in Buenos Aires last autumn with the St. Gregory the Theologian Charity Foundation’s assistance. The future Pope visited the exhibition and keeps warm recollections of it.

The DECR chairman greeted other guests who arrived in Rome to attend the enthronement: Patriarch Bartholomew of Constantinople, Metropolitans John of Pergamon and Emmanuel of France (Patriarchate of Constantinople), Amfilohije of Montenegro and the Littoral (Serbian Orthodox Church), John of Korça (Albanian Orthodox Church), and Cardinal Christoph Schönborn, Archbishop of Vienna.

Attending the enthronement of Pope Francis as honorary guests will also be Metropolitan Anthony of Borispol, chancellor of the Ukrainian Orthodox Church, and Metropolitan Platon of Feodosia and Kerch, who served in Argentina during many years and was well acquainted with the new Pope.