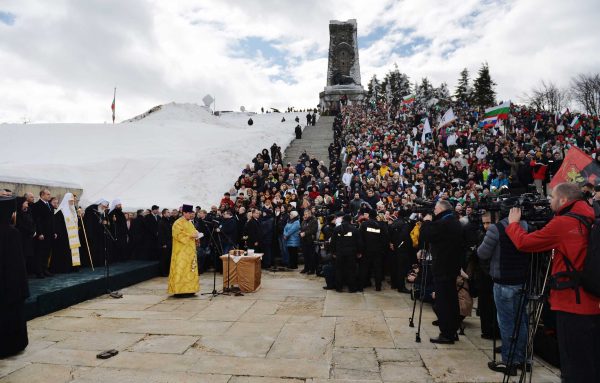 On 3 March 2018, a commemorative ceremony marking the Liberation Day in Bulgaria took place on Mount Shipka. The 140th anniversary of the liberation of Bulgaria was celebrated under the auspices of the head of state.

Among those who participated in the ceremony were Mr. Rumen Radev, President of the Republic of Bulgaria; Mrs. Tsveta Karayancheva, President of the National Assembly of Bulgaria; as well as other statesmen, diplomats, public figures and many other people of all ages who gathered together at the foot of the Monument of Freedom on Shipka, with flags of Bulgaria and Russia in their hands.

His Holiness Patriarch Kirill of Moscow and All Russia said a litiya for the repose of the souls of Emperor Alexander II and all the Russian and Bulgarian commanders and soldiers, and all the archpastors, priests, monks, nuns and laypeople who had laid down their lives for the faith and liberation of the Bulgarian land. 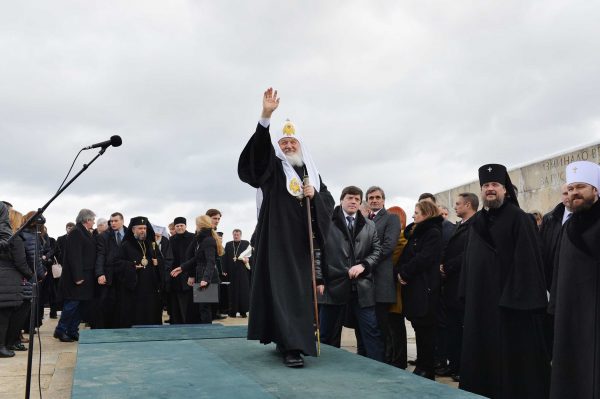 Addressing all those present, the Primate of the Russian Orthodox Church said, in particular:

“Today, celebrating the liberation of Bulgaria from the Ottoman yoke, we have offered prayers for the repose of the souls of the Russian soldiers and the Bulgarian militiamen who died as heroes, defending Shipka. It was on the most dramatic moments of the War of Liberation.

“According to the Word of God, ‘greater love has no man than this, that a man lay down his life for his friends’ (Jn 15:13). And thousands of soldiers and officers of the Russian army gave their lives to save the people, with whom they were bound up by the common holy Orthodox faith. Inspired by the faith, they ‘became mighty in war, put foreign armies to flight’ (Heb. 11:34). Having shown an outstanding fortitude, courage and bravery, those warriors of Christ bought with their own blood the liberation of the ancient Christian country from the bitter, five-centuries-old non-Christian yoke.”

“I am also praying today that the centuries-old spiritual ties between our peoples, revealed with special force 140 years ago, might always be inviolable and be manifested in the fraternal like-mindedness and the willingness to strive to strengthen the unity of the Holy Orthodoxy and to preserve Christian values and the Orthodox traditions established by our fathers. I cordially greet all of you with this remarkable date and the wonderful feast for the Bulgarian and Russian peoples.”

Bulgarian President Rumen Radev also delivered an address, in which he thanked the Primates of the Russian and the Bulgarian Orthodox Churches and mentioned the moleben of thanksgiving celebrated earlier at the Monastery of the Nativity of Christ in Shipka.

The Primates of the Russian and the Bulgarian Orthodox Churches visited the Monument of Freedom at the mount’s top, where they laid wreaths to the grave of defenders of Shipka.