On 24 February 2013, the Patriarchal Electoral Church and People’s Council which took place in Sofia elected Metropolitan Neophyte of Ruse as Metropolitan of Sofia and Patriarch of Bulgaria. 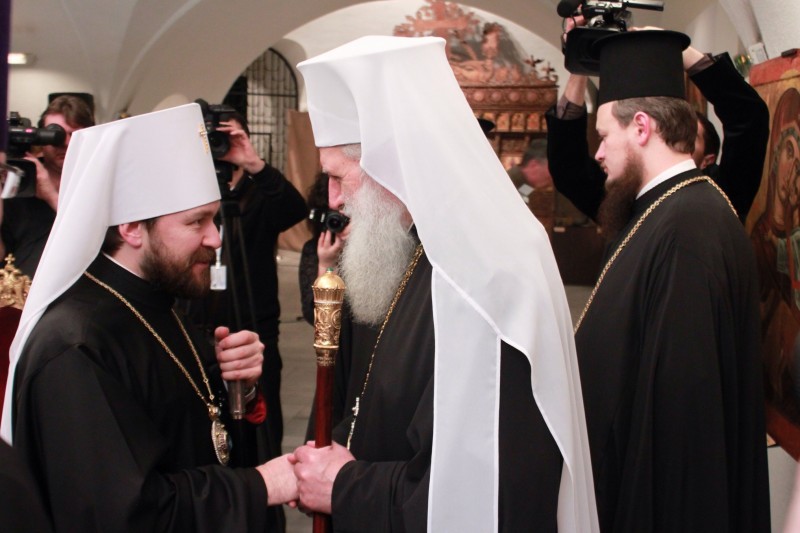 With the blessing of His Holiness Patriarch Kirill of Moscow and All Russia, the Russian Orthodox Church was represented at the enthronement of His Holiness Patriarch Neophyte of Bulgaria by Metropolitan Hilarion of Volokolamsk, chairman of the Moscow Patriarchate’s Department for External Church Relations; archpriest Nikolai Balashov, DECR vice-chairman; and archpriest Igor Yakimchuk, DECR secretary for inter-Orthodox relations. Among those present in the church was also archimandrite Filipp (Vasiltsev), rector of the metochion of the Russian Orthodox Church in Sofia.

Bishop Naum of Stobi, general secretary of the Holy Synod of the Bulgarian Orthodox Church, read out an Election Act. Symbols of patriarchal dignity were presented to Metropolitan Neophyte, and the rite of enthronement was performed.

Metropolitan Joannikij of Sliven greeted His Holiness Patriarch Neophyte of Bulgaria on behalf of the Holy Synod of the Bulgarian Orthodox Church.

In the evening, members of the Russian Orthodox Church’s delegation attended a reception in honour of the new Primate of the Bulgarian Orthodox Church, which took place in the crypt of the St Alexander Nevsky Cathedral in Sofia, and had a talk with His Holiness Patriarch Neophyte.