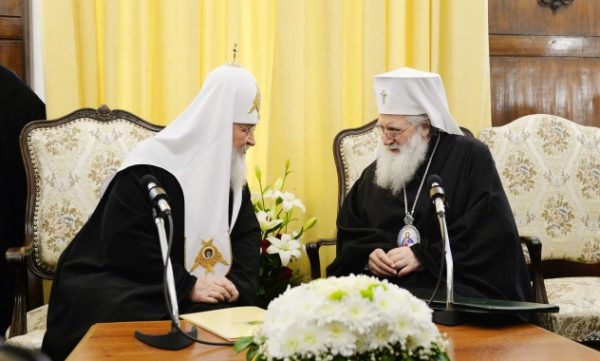 In the Synodal Chapel of the Holy Right-Believing Tsar Boris, His Holiness Patriarch Kirill celebrated a moleben of thanksgiving in the presence of the Primate of the Bulgarian Orthodox Church to mark the arrival of the Russian Orthodox Church’s delegation to Bulgaria.

After the moleben, the Primates of the Russian and the Bulgarian Orthodox Churches had a brotherly meeting in the Synodal chamber.

Addressing Patriarch Kirill, Patriarch Neophyte of Bulgaria said, in particular, “Today, on the eve of March 3, the Orthodox Bulgaria welcomes you with sincere love, once again demonstrating its fraternal love and appreciation – the feelings that it has always had for the Orthodox Russian people and the Russian Orthodox Church.”

Patriarch Neophyte expressed his hope that the upcoming days of celebration would leave in heart of the high guest warm memories of the joy of brotherly meetings, mutual love and fruitful cooperation of the two Churches. According to the Primate of the Bulgarian Church, all this has always characterized the relationships between the Russian and the Bulgarian Orthodox Churches and between the Orthodox peoples.

His Holiness Patriarch Kirill of Moscow and All Russia said in response:

“Your Holiness, Your Eminences and Your Graces,

“I am glad to set my foot again in the Bulgarian land today and to fervently greet Your Holiness and beloved brothers the archpastors.

“My current visit is timed to an important memorable date celebrated by our two Churches and by our peoples – the 140th anniversary of the liberation of Bulgaria from the Ottoman yoke. The heroic events of the Russo-Turkish war of 1877-78 revealed with special clarity the lofty moral qualities of the Orthodox army, which for many centuries were raised by the Russian Orthodox Church in her flock. The greatest outcome of that war was the attainment of freedom and spiritual growth of the Orthodox Bulgarian people, the preservation of their language, culture and traditions.

“The Russian Orthodox Church has always remembered that it was the Bulgarian missionaries, disciples of Ss. Cyril and Methodius, Equal-to-the-Apostles, who in the 10th century enlightened our ancestors with the holy Orthodox faith, introduced them to the Slavonic literature and opened for them the treasury of the Christian culture and Patristic writings. Had it not been for the Bulgarian Orthodoxy, the Russian Orthodoxy could not have existed, or, if it had existed, it would have been completely different, because it was through the Bulgarian Orthodoxy that the Russian people received the basics of the Orthodox faith in their native Slavonic language. Therefore, tens of thousands of the Russian warriors who laid down their lives for the liberation of Bulgaria from the bitter non-Christian slavery, repaid their historical debt to their brothers the Bulgarians, thus having born witness for all centuries to come to the unquenchable fraternal love between our Churches.

“I am grateful to Your Holiness for your kind invitation to visit Sofia and the sites where the Russian soldiers and the Bulgarian militiamen performed their feats of arms, as well as for yet another opportunity to meet, discuss church matters and pray with you and with the beloved hierarchs, clergy, monastics and laypeople of the Bulgarian Orthodox Church.”

During the meeting, the Primates of the two Churches discussed various issues of bilateral relations and the pan-Orthodox agenda, devoting special attention to the situation in Ukraine. His Holiness Patriarch Kirill thanked His Holiness Patriarch Neophyte for his unwavering and firm support for the canonical Ukrainian Orthodox Church.

Most viewed articles
His Holiness Patriarch Kirill Contracted the Coronavirus109
Of Boasting and Modesty103
4th Plenary Session between ROC and Coptic Church Held86
What Does the Cross Mean for us Today?44
Most popular authors
Pravmir.com team195
Archpriest Basil Ross Aden103
Priest Robert Miclean44