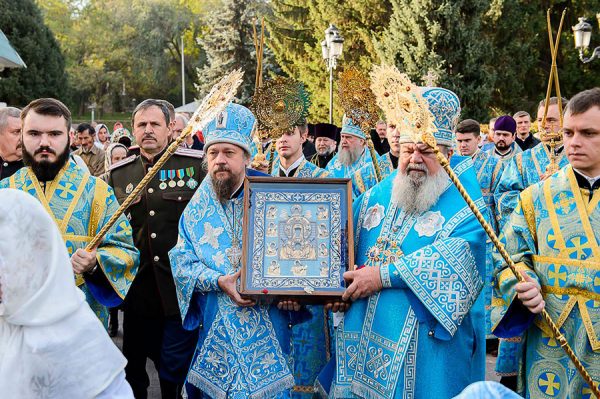 On October 8, 2019, the feast day of St Sergius of Radonezh, “Abbot of the Russian Land,” was celebrated. With the blessing of His Holiness Patriarch Kirill of Moscow and All Russia, the celebration of the 15th anniversary of the canonization of the New Martyrs and Confessors of Kazakhstan and the establishment of the Diocese of Almaty and Astana are being celebrated with the visit of the Kursk-Root Icon of the Mother of God “of the Sign” to the southern capital.

Coinciding with these celebrations was the completion of the capital renovation of the spiritual, historical and cultural jewel of Kazakhstan, the Ascension of the Lord Cathedral in Almaty. This masterpiece of wooden architecture is once again open to its parishioners and pilgrims.

His Eminence Metropolitan Alexander of Astana and Kazakhstan led the minor consecration of the renovated temple and officiated at Divine Liturgy, before which a procession of the cross with the Kursk-Root Icon took place. Joining Vladyka Alexander were hierarchs and clergymen of the Orthodox Churches of Kazakhstan, Uzbekistan, Russia, Poland, as well as His Grace Bishop Nicholas of Manhattan of the Russian Orthodox Church Outside of Russia. Over four thousand believers came to venerate the icon of the Mother of God.

The archpastors lifted prayers for the unity of Holy Orthodox Christianity, the preservation of the Church from division and schism, and for peace in the internecine strife in Ukraine.

After the singing of Many Years, Metroplitan Alexander thanked the first President of Kazakhstan, Nursultan Nazarbaev, who personally sanctioned the renovation of the grand cathedral, and all the officials, clergymen and parishioners who contributed to the great undertaking. The event was widely broadcast and reported on in the mass media.