Recently, I watched an interesting interview with the world‘s greatest athlete; Steve Nash. As everyone knows, Steve Nash is one of the biggest surprises in the NBA. Undersized, slower and weaker than most players, and unable to play amazing defense, Nash was never expected to be much of a player when he was drafted by the Phoenix Suns in 1996. He played a largely secondary role in his early career and was traded just two years later because of his poor production. Now near the end of his career, and finished with his 14th season, Nash is one of just three guards to ever win back to back MVP awards. The others? Magic Johnson and Michael Jordan.
Fr. Andrew Barakos | 18 May 2011 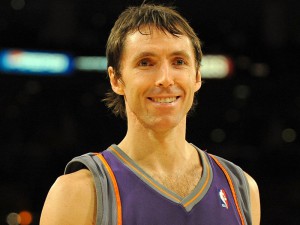 Recently, I watched an interesting interview with the world‘s greatest athlete; Steve Nash. As everyone knows, Steve Nash is one of the biggest surprises in the NBA. Undersized, slower and weaker than most players, and unable to play amazing defense, Nash was never expected to be much of a player when he was drafted by the Phoenix Suns in 1996. He played a largely secondary role in his early career and was traded just two years later because of his poor production. Now near the end of his career, and finished with his 14th season, Nash is one of just three guards to ever win back to back MVP awards. The others? Magic Johnson and Michael Jordan.

In the interview I saw, Nash talked about when he was a young man in high school and thought he might like to play in the NBA someday. However, an older player, who had almost made it to an NBA team several times, told Nash that that wasn‘t enough. He told Nash that he had to make a decision that he was going to play in the NBA and then he would. The key first step for Nash, according to his friend, was desire. He had to have a deep desire to play in the NBA in order to finally make it there. So, Nash took his friend‘s advice and at that moment made a decision that he would play in the NBA. Nash‘s belief in this desire was clearly strong, because he says that from this point on he knew, absolutely knew, that he would play in the NBA. This, despite the fact that he was an undersized white guard from British Columbia, received no interest from any Division 1 NCAA colleges and was known for being a poor defender.

In his first letter to the Corinthians, St. Paul says the following, ―But earnestly desire the higher gifts. And I will show you a still more excellent way. [1 Cor. 12:31] The more excellent way that Paul talks about next is love. Love leads us to God, because God pours love into our hearts when we deeply desire Him. So, one answer about how we can get closer to God is to desire closeness. Simple and strong desire is the first step towards closeness with God.

Now, Steve Nash is no fool and readily admits that without hard work, his desire would have meant nothing. Of all NBA players, Steve Nash is known for having one of the hardest work ethics. From his daily workout to his shooting and dribbling drills, from his stellar diet to the work his does on his psyche, Nash is one of the hardest workers out there. According to Nash, it begins with habits. Small but serious habits, like eating the same diet regularly, or laying down on the sideline every break because of his poor back, cultivate success for Nash.

Much the same can be said about achieving closeness with God. If we want to be close to God, we must develop good spiritual habits. By breaking down the goal of closeness with God into small and simple habits, the goal can be achieved without it seeming so overwhelming. Our holy Fathers knew this very well. For instance, one habit that all of the holy fathers were in favor of was regular attendance at church and the regular taking of communion. St. Gregory Palamas wrote, ―On this day [Sunday] you should go to the temple of God and attend the services held there and with sincere faith and a clean conscience you should receive the holy body and blood of Christ.‖ [Palamas, A New Testament Decalogue, 4; Philokalia, IV, 326] By constantly attending Sunday services, we allow God‘s body and blood to do the work of which we are not always capable. The simple habit of coming to church allows God to work in us and draw us closer to Him.

Another simple habit that the Fathers talk about regularly is guarding our hearts. The Fathers understood the human heart to be the center of all human thoughts and reflection; and guarding our hearts from sinful and destructive thoughts was the first step to holiness according to their teaching. For instance, St. Isaiah the Solitary, a monk from the mid-fifth century, writes, ―I entreat you not to leave your heart unguarded, so long as you are in the body. Just as a famer cannot feel confident about the crop growing in the fields, because he does not know what will happen to it before it is stored away in his granary, so a man should not leave his heart unguarded so long as he still has breath in his nostrils. Up to his last breath he cannot know what passion will attack him; so long as he breathes, therefore, he must not leave his heart unguarded, but should at every moment pray to God for His help and mercy. [St. Isaiah the Solitary, On Guarding the Intellect, 15; Philokalia, I,25] By watching carefully over our thoughts and always being careful not to give in to sinful thought or passions by acting on them, we are able to allow God to draw us closer to Him as well.

So, the answer to the questions, ―How can we get closer to God? and, ―What can we do to get closer to God when our faith fails us?, is to have a deep desire to be close to God and to practice the habits of coming to church for Communion and guarding our hearts so that we can repel sin. When we take simple actions, we are choosing to turn towards God. Our faith declares that God does the work of bringing us to Him, but we must at least will ourselves to turn towards Him. Though our faith may not always be as strong as the saints, simple acts can help us to reconnect and move closer to God.

Great Lent and the Healing of Wounds