Cynicism, of course, is most often a reaction: a reaction to problems and temptations that one experiences as unmanageable. Then, as a defense – just not the right defense – a bitter irony emerges that comes close to dismissal and even to what we call cynicism.
Archpriest Maxim Kozlov | 04 May 2012

What is cynicism? Is it a defense reaction of the sensitive? Or, to the contrary, a salient feature of hardheartedness and insensitivity?

Pravmir.ru posed these questions to Archpriest Maxim Kozlov, Rector of the Church of St. Tatiana at Moscow State University, Professor of the Moscow Theological Academy, and First Deputy Chairman of the Education Committee of the Russian Orthodox Church.

Cynicism, of course, is most often a reaction: a reaction to problems and temptations that one experiences as unmanageable. Then, as a defense – just not the right defense – a bitter irony emerges that comes close to dismissal and even to what we call cynicism. “Well, yes, I know all about that – all about bishops, monks, and priests. You can go on telling your fairy tales, but this is real life.” 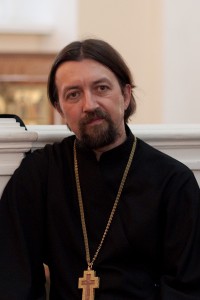 The main problem here, in my opinion, is that the cynical person is unable to draw a line between, on the one hand, the Church as a crowd of repentant sinners (although in our times, as I often repeat – adapting the words of Ephraim the Syrian – it is a crowd of unrepentant sinners) and the Church as the Bride of the Lamb, Holy and Immaculate. That is, one might make a theoretical distinction in one’s head, but not in one’s life and practical awareness. This is a problem, since all this obscures one’s vision.

Second, and connected with this, is when one begins to perceive the Gospel as metaphor, as something that speaks about the beautiful and the ideal, about something that is praiseworthy, but that cannot serve as a guide to one’s own life. The Gospel is lofty, the saints are holy, the lives of clergy are spiritual –but life remains life. This is essentially a matter of spiritual defeatism. As long as someone is in such a state, even if he has reservations, he is drawing a conclusion: the Holy Spirit does not act sufficiently – in our times, in my life, in the people around me – for them to change; that is, for metanoia (co-repentance, in the proper sense of the word, i.e., a change of mind) to take place in them, in us, in me.

This is quite frightful. In certain cases it is even better – and, as an Orthodox priest, I hesitate to say this – to be guided by the words of Luther, although I understand what he meant: Sin boldly (although he is not encouraging sin in the proper sense of the word), but believe even more boldly that Christ’s Sacrifice saves you. [1] Seeing sin – perhaps even in highly-placed people, even people connected with the church hierarchy – do not be tempted by this, believing that the Lord on His Cross made it possible for sin to be forgiven and corrected.

Actually, this is the only defense; there is no other defense in this world. The world lies in evil, and we see so much evil, falsehood, vulgarity, and reigning injustice that Christianity can have only one response: all that is true, but the Lord has conquered it all on the Cross, and we can prove ourselves to be not alien to His victory. For my part, I do not know of any other defense against cynicism.

How else can the cynicism of an Orthodox person be manifest?

It is manifest in a coolly dismissive attitude towards things that had previously been sacred to him. Here it is an individual matter: be it the Mysteries, respect for the hierarchy, or the living spiritual impulses of people.

St. John of the Ladder has words about how hardness of heart, or lack of charity, begins with the unwillingness to give alms and ends with hatred for those who do give. [2] Cynicism often manifests itself in us, first, when we begin to distrust our own spiritual impulses and the sincerity of others; later, seeing piety, we cannot consider it to be anything but hypocrisy or deceit of some sort. When we notice this in ourselves, it is very alarming.

One needs to carry out a radical adjustment in oneself, understanding that I am very seriously ill. This happens when another person’s prayer and bowing evoke dismissal in me; when, seeing hundreds of thousands of people lining up for the Belt of the Most Holy Theotokos, all I want to do is joke about how they are half-pagans with a magical worldview; when, seeing a girl coming to church decently, wearing a scarf and an appropriate skirt, I want to say: “Prig!” And so on and so forth. Perceiving piety in this way is very alarming.

It is often remarked that the Orthodox are great cynics. For example, many people notice that in difficult situations non-church-going and unbelieving people often help more quickly and readily than church people.

That happens, it must be admitted. If we look at all sorts of charitable funds undertaking real help for the needy and for people in extraordinary life circumstances, we most often – or, at least, very frequently – see people with little connection to the Church.

But what is new here? The Lord warned us – the parable of the Samaritan speaks directly to this – that a person may turn up at your side who is not of your faith and whose views you do not share, while the priest and the Levite walk past. At the very least, we should be prepared for this.

[1] “Be a sinner, and let your sins be strong, but let your trust in Christ be stronger, and rejoice in Christ who is the victor over sin, death, and the world.” (Luther to Philipp Melachthon; August 1, 1521; letter no. 99, paragraph 13.)

[2] “The beginning of love of money is the pretext of almsgiving, and the end of it is hatred of the poor. So long as he is collecting he is charitable, but when the money is in hand he tightens his hold.” (The Ladder of Divine Ascent, 16:8.)

To Be Just a Good Person. Will It Be Enough At the Last Judgment?