We live in a world of great oversimplification and therefore spiritual poverty. “Scientific” or “Unscientific.” People use words like these all the time as if they were self-evident and self-explanatory, and they use them because everyone else also uses them, without reflection, without debate. In fact, they themselves believe these reductions blindly and simplistically, and so any other approach appears to them as neither serious nor worthy of attention. The question is already decided. But is that really true?
Protopresbyter Alexander Schmemann | 10 April 2010

Unless I see…I will not believe” (John 20:25). So said Thomas, one of Christ’s twelve disciples, in response to the joyful news of those who had seen their crucified and buried Teacher risen from the dead. Eight days later, as recorded in the gospels, when the disciples once again were all together, Christ appeared and told Thomas: “Put your finger here and see my hands; and put out your hand and place it in my side; be not faithless, but believing.” And Thomas exclaimed: “My Lord and my God!” Then Christ told him: “You have believed because you have seen me; blessed are those who have not seen and yet believe…” (John 20:24-31). 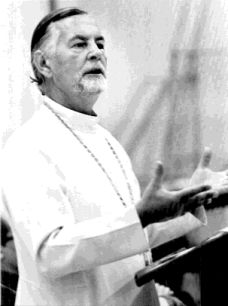 Millions of people today think and speak essentially like Thomas, and assume that this is the only correct approach worthy of any thinking person. “Unless I see, I will not believe…” In our contemporary speech isn’t this the “scientific approach?” But Christ says: “Blessed are those who have not seen and yet believe.” This means that there is, and was, another approach, another standard, another possibility. True, others may say, but that approach is naпve and not rational; it’s unscientific; it’s for people who are backward; and since I’m a person of the modern world, “Unless I see, I will not believe.”

We live in a world of great oversimplification and therefore spiritual poverty. “Scientific” or “Unscientific.” People use words like these all the time as if they were self-evident and self-explanatory, and they use them because everyone else also uses them, without reflection, without debate. In fact, they themselves believe these reductions blindly and simplistically, and so any other approach appears to them as neither serious nor worthy of attention. The question is already decided. But is that really true? I just said that we live in a world of great spiritual poverty. And indeed, if the end result of humanity’s interminable development boils down to this pronouncement, “I won’t believe it till I see it”; if the human race looks upon this as the height of wisdom and reason’s greatest victory, then our world truly is poor, superficial, and most all, incredibly boring. If I only know what I see, touch, measure and analyze, then how little I really know! The whole world of the human spirit falls by the wayside, all the intuition and profound knowledge that flow not from “I see” or “I touch,” but from “I think” and, most importantly, “I contemplate.”

What falls away is that realm of knowledge which for centuries was rooted not in external, observable experience, but in another human faculty, an amazing and perhaps inexplicable ability that sets human beings apart from everything else and makes them truly unique. Even robots, machines and computers can now touch, handle and manipulate objects; they can make accurate observations, and even make predictions. We know that they actually perform better than human beings in measuring, comparing, making exact observations flawlessly; they are more accurate, more “scientific.” But here is what no robot, under any circumstances, will ever be able to do: to be filled with wonder, to be awed, to have feelings, to be moved by tenderness, to rejoice, to see what can’t be seen by measurement or analysis of any kind. No robot will hear those unheard sounds that give birth to music and poetry; no robot will ever cry, or trust. But without all this doesn’t our world become colorless, boring and, I would say, unnecessary? Oh yes, planes and spaceships will fly ever further and faster. But where to and what for? Oh yes, laboratories will conduct their analyses with ever increasing accuracy. But to what end? “For the good of humanity,” I’m told. I understand, so this means that one day we will have a healthy, well fed, self-satisfied human being walking about, who will be totally blind, totally deaf and totally unaware of his deafness and blindness.

“Unless I see I will not believe.” Clearly, however, observable experience, empirical data, is just one form of knowledge, the most elementary, and therefore the lowest form. Empirical analysis is useful and necessary, but to reduce all human knowledge to this level is like trying to comprehend the beauty of a painting by a chemical analysis of its paint. What we call faith is at a second and higher level of human knowledge, without which, it can be claimed, man would be unable to live even a single day. Every person believes in something or someone, so the only question is whose faith, whose vision, whose knowledge of the world corresponds more accurately and more completely to the richness and complexity of life.

Some say that the resurrection of Christ must be a fabrication since the dead do not rise. True, if there is no God. But if God exists, then death must be overthrown, since God cannot be a God of decay and death. Others will then say: but there is no God, since no one has seen him. But how then do you account for the experience of millions of people who joyfully affirm that they have seen, not with their physical eyes, but with a profound and certain inner sight? Two thousand years have passed, but when the joyful proclamation “Christ is risen!” descends as if from heaven, all still send out the same triumphant response, “Truly He is risen!”