Bucharest church to open center for children with Down syndrome: Their joy reveals the presence of the Holy Spirit 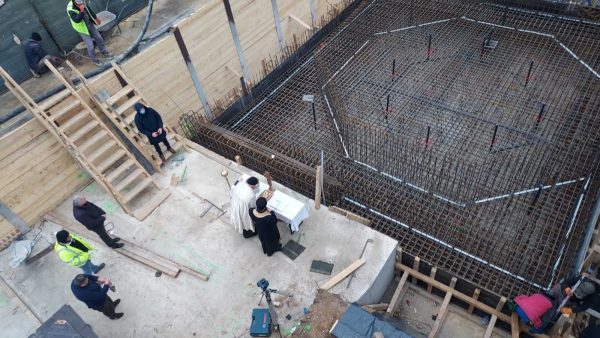 Father Radu Petre Mureșan, the Parish Priest of Bucharest’s Mavrogheni Church, blessed on Monday the building site of a new centre being built in the church courtyard for children with Down syndrome and autism. Their perpetually manifest joy reveals the presence of the Holy Spirit, he said.

“Our goal was to find inspiration in similar centres from abroad and build an integrated centre, where all the needed therapies to be fully state-subsidized and offered by accredited professionals,” explained the priest.

Romanian parents need lots of resources to be able to care for these children and the infrastructure is not very friendly. Thus, these children become one of the most discriminated categories, he added.

“It is crucially important that they socialize and become more confident. That is why we needed to conceive an integrated project to address all their needs. I know people who learned German and looked for a job abroad only to be able to offer their children the chance to benefit from such therapies,” continued Father Radu Petre Mureșan.

There are more than 2.000 children with Down syndrome in Bucharest, the Capital city of Romania. The new centre could offer daily therapies for 150 of them.

“God found me worthy of a Down syndrome child and I know their world and their needs,” Father Radu Petre Mureșan declared for Basilica.ro.

The first child in the family was an adopted little girl. Then Teodor came, the first-born in the family. “We had the diagnosis before birth and assumed this cross,” the parish priest continued.

“As I knew many people from among the clergy who had children with Down syndrome, I bitterly ‘confessed’ to our doctor, saying that maybe God was punishing the children for their parents’ unworthiness,” the priest recounted.

“But the doctor contradicted him, explaining: ‘Children with Down syndrome are often born in families of priests or good Christians because they are those who always assume them and do not end their lives before birth.”

Indeed, although recent data shows that 99% of people with Down syndrome are happy with their lives, other statistics uncover a harsh reality: 92% of children diagnosed with Down are aborted. In Iceland, this percentage is 100% and the country does not have such children – nor the blessing they represent.

Blessing – the priest said – because this cross has turned out to be a light burden, according to the Saviour’s promise. “Teodor is constantly laughing. I have learned from him that we need to live in joy. Joy is the sign of the presence of the Holy Spirit – authentic, loving joy.”

Teodor is eight years old and goes to a normal school. He is a joyful and happy child.

His family experience inspired Father Radu Petre Mureșan to take a decision: “In 2020, the Solemn year of the pastoral care of parents and children, I decided to make a project to help these children’s families”.

A project of public utility

The centre, probably the most complex of its type in Romania, will be ready for inauguration next February. The parish offered a 300 square-metre plot, which is almost one million Euros worth, and the building is being made by the Local Council of Bucharest’s Sector 1.

The building shall have a basement, ground-floor plus other two levels: 925 square meters in total, with a reception room, 10 specialized medical cabinets, three rooms for educational therapy, a pool for hydro-kinesiotherapy, elevator, locker rooms, showers and annexes.

Yet, the most difficult part will be to find and train therapy workers. Both children with Down syndrome and autism need complex, personalized therapies. Children with Down need four hours a day of different therapies for 3 to 5 days a week, while costs amount to 20-40 Euros an hour – in a country where the average wage is around 700 Euros.

But, if they benefit from timely therapeutic intervention, over 75% recover and lead a normal life, says Father Radu Petre Mureșan. In Western countries, up to 50% of people with Down syndrome are integrated into the labour market, unlike Romania, where the rate is up to 0.5% – one hundred times less.

“We want a centre of excellence, a model of good practice which can help the community. It is not even a Church project – but one of public utility,” he added.

Father Radu Petre Mureșan will go even further. When one of his spiritual children asked what will happen to his special child when the father will pass away, the parish priest promised him to also create a safe dwelling place for those who cannot be fully integrated into society.

For parents of children diagnosed with the syndrome and who may wonder what to do, while being pressured by doctors or those around to abort their children, the priest has the following message: “Let them get the courage to bring the children into the world! These children have the right to live and have their own special charisma!”

What may look like a heavy cross is a saving light, the priest says.