Source: blogs.goarch.org
Hopefully, as people become better informed, they may come to realize that dialoguing with other Christians could only help us enhance our own appreciation of the Orthodox faith.
Archimandrite Nathanael Symeonides | 14 April 2014 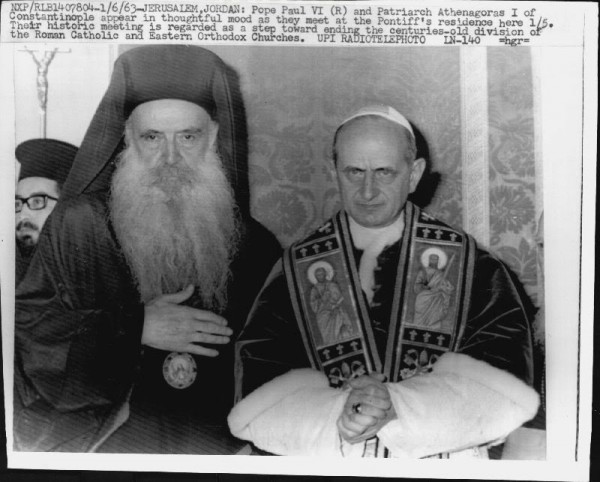 For almost a year now, since my appointment in September as the Director of the Department of Inter-Orthodox, Ecumenical and Interfaith Relations of the Greek Orthodox Archdiocese of America, friends and family members have been asking me about my new diakonia in the Church. Most of the time I find myself giving people simple yet candid answers. “Things are ok,” I say, or, “Each day brings about something new and exciting.” Don’t get me wrong; I try my best to give people an idea of special projects and long-term goals of the department, however, it is quit a task to fully discuss the mission of a department that is tasked with such diverse objectives. To help summarize the mission of the office, I will often tell people, “The Department and its staff are called to express, in our words and deeds, the Church, which is not of the world, yet in the world, and which exists for the salvation of the world.” Most get it.

Overall, my conversations with people are quite positive. Most sincerely care about the work of the department and some are eager to assist in realizing its multifaceted mission. However, there are some individuals who fear that the ecumenical component of our work will eventually lead us down the road of theological concessions. According to them, engaging the other is not necessarily a bad thing. What is problematic, however, is when the other is a Roman Catholic or a Protestant. For these individuals, the other poses a serious threat to our identity as Orthodox Christians, and therefore, any dialogue with them is analogous to theological assimilation and compromise. To my surprise, some folks have even asked me if I was thinking about becoming Catholic or if I was being forced to accept the pope as my spiritual leader! Fortunately, even though the average person may not fully understand every dimension of the ecumenical dialogue, the majority of our people perceive dialogue as an exercise in cooperation rather than compromise.

By my comments I don’t mean to oversimplify the ecumenical dialogue, nor do I wish to suggest that those who remain apprehensive about the ecumenical movement are uneducated and unsophisticated. After all, people are entitled to their opinions, and chances are that even the most negative opinion about the ecumenical dialogue is often grounded on real—though often limited—experience. My hope, however, is that with proper education and the sharing of information we may view the ecumenical dialogue under a proper lens and base our opinions on fact rather than on fiction. In many ways, this could be said to be the greatest contribution we can make to the ecumenical movement. Hopefully, as people become better informed, they may come to realize that dialoguing with other Christians could only help us enhance our own appreciation of the Orthodox faith. This self-discovery is most pronounced in our engagement with the Catholic Church.

When Greek Orthodox and Roman Catholic Christians engage each other in a dialogue of truth and love they not only explore differences between their communities—those teachings and practices that keep us from entering into full communion with each other—but they also discover common elements that connect the two communities. Moreover, this labor of love provides us with a unique perspective by which we can fully appreciate our own sacred Tradition. If we are sure of our Orthodox Christian identity, then we must be confident that engaging the other could never lead to assimilation; we will not lose our “Orthodoxy” by dialoguing with the Roman Catholic Church, as they will not lose their “Catholicity” by dialoguing with the Orthodox Church.

In a recent article, the Reverend Father Ronald Roberson (CSP, Associate Director of the U.S. Bishop’s Secretariat for Ecumenical and Interreligious Affairs, USCCB) reflected upon a comment made by His Holiness Pope Francis, who praised Orthodoxy’s “vision of the Church and synodality.” The pope was not afraid to highlight an aspect of our Orthodox Christian Tradition. Unlike those with a limited appreciation of the ecumenical dialogue, the pope was not afraid that he would change or become something lesser by pointing to a historical and theological truth. To read Fr. Ron’s entire, CLICK HERE.

In 1964, for the first time in over a millennium, the Pope of Rome and the Ecumenical Patriarch of Constantinople climbed over the walls that divided the two Churches for centuries and met each other in Jerusalem. This was a moment in history that will be studied for centuries to come! Now, 50 years later, Pope Francis and Ecumenical Patriarch Bartholomew have renewed this commitment to truth and love and will carry this legacy into the new millennium through their scheduled meeting in Jerusalem on Sunday, May 25, 2014. The spiritual leaders of the Roman Catholic Church and the Orthodox Church will meet each other to commemorate a historic event while simultaneously looking to forge together a future of hope and faith. The meeting in 1964 led to a series of significant developments that have had a positive impact on the lives of both Catholic and Orthodox faithful around the world (to be discussed in a later post). We are all very hopeful that the meeting between Pope Francis and Patriarch Bartholomew will in like manner further enhance the lives of our faithful. It is my prayer that by promoting the dialogo (dialogue) between the Roman Catholic and Orthodox Churches we will learn to engage in greater degrees of leitourgia (work), and that by the grace and guidance of the Holy Spirit, we may one day come into full koinonia (communion) with each other.