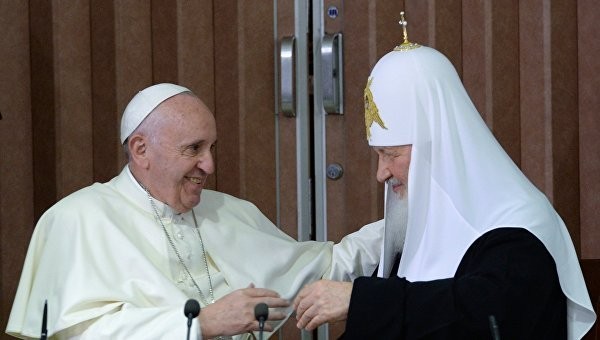 I wrote on this phrase back in 2014, when the conversational climate was not as bad as it is today. Just two years ago, I wrote on this passage and related it to how we relate to and address believers with whom we disagree. I still clearly see that the issue needs to be addressed. Pope Francis and Patriarch Kyril met in Havana. Before they had even met, one could already see blogs and Facebook postings from Orthodox believers pontificating (pun intended) about how nothing could happen unless the Roman Catholic Church acquiesces to every one of their points. Notice that I did not say that the Romans would acquiesce to every one of the Orthodox Church points; I said to every one of their points. This is because this is actually their opinion. In some postings that I have read, I could not agree with what the posters blithely define as essential to be Orthodox. More than one poster would actually be excluding some of their fellow Orthodox by what they insist is essential, let alone Roman Catholics!

It would not be so bad if they pontificated about their opinion. But, they write as though there is somewhere a settled body of agreement among the Orthodox as to what it would take to allow the Roman Catholic Church to be one with us. There is no such body of settled doctrine or agreement. There are various canons that point in certain directions, and there are various doctrines to which the Orthodox unequivocally point and state are essential. But, there are other areas that are nowhere near settled. The issue of leavened and unleavened bread was never settled before the final split. Yes, the Orthodox state that the Quinisext Council is Ecumenical because the Sixth Ecumenical Council said so. The only problem is that the Patriarch of Rome and his bishops never agreed to all of the clauses. In fact, it is well recorded that when the three delegates returned, their signature was rejected by the Pope. And, bread is not the only issue. There is the issue of portraying Jesus as a Lamb, the issue of statues versus icons, etc. For those who think that those are issues on which Rome would yield, given that they neveryielded on those issues, I will simply say that they will not. More than that, despite what the Quinisext Council said, on those issues I will argue that, despite Orthodox claims, the failure of the Church of the West to accept those canons means that our claim that they are Ecumenical may be more wishful thinking than either historically or theologically accurate.

But, should there come to be an actual possibility of reunion, those are issues that will be settled by the Church through her bishops, and not by one or another bishop, or one or another website, or one or another blog post. Sadly, I fear that if such is ever the case, there would promptly be a split by those claiming to be “true” Orthodox while at the same time acting as though Orthodox ecclesiology means little to them. They will cite the saints: Athanasius and Valentine and Ignatius and John of Damascus, etc., while managing to ignore the fact that even the great warriors for truth did not leave the Church, but stayed faithful to her even when it seemed as though the majority were against them. That faithfulness worked, for the Holy Spirit was with them, and their enemies were not able to charge them with being schismatic. When sent into exile, they fled not but quietly went, while continuing to argue their point. Not so the various who are already writing about how they would leave the Church should there ever be rapprochement.

And it is here that G.K. Chesterton gives us a pointer. Idolatry uses fear as its weapon. All too often fear is invoked in various of the postings, oh, not all of them, but more than I would like to see. One of the major fear points is the word “ecumenism.” It is bandied about as though everyone knows that ecumenism must be wrong. But, of course, what they mean is that they fear that the Orthodox will give up all their beliefs for the sake of unity. Yet the recent Synod of the Russian Orthodox made it clear that ecumenism is a good thing because it allows us to have contact with those who most need to be exposed to the Truth. The Synod made clear that ecumenism does not mean that we will give up our beliefs, but rather that we will have a platform to engage others in order to communicate Truth. It is an evangelistic view of ecumenism. It is a convenient word for the fearful to use because there are groups who have “dumbed down” the faith in order to try to find an acceptable compromise that will allow everyone to be together. And, there are indeed liberal theologians who use ecumenism as a way to peddle old and discredited heresies, or even some types of paganism. But, the Russian Synod carefully defined ecumenism in such a way that it gave Patriarch Kyril the freedom to meet with Pope Francis without any fear that some unacceptable compromise would come of the meeting. Idolatry sets up ecumenism as a false devil.

But, the hardest proposition for idolatry to accept is the reality that rapprochement with the Catholic Church must include the possibility that we may be shown to be wrong on one point or another. It is true that, as the Church, the Holy Spirit will keep us in the Truth. But, that does not mean that at every minute there is no untruth in the Church. The recent break in communion between the Churches of Antioch and Jerusalem forms a clear example of untruth in the Church. One or the other of the Patriarchates must be wrong, or both may be wrong. But, it is impossible that both are walking in Truth. I had earlier mentioned the Quinisext Council, and the refusal of the West to accept its canons. We cannot so hold a view of the Church that anything and everything that the East has done must be 100% Truth. There are hierarchs, writers, and bloggers whose view is that the Roman Church must completely change itself into an Orthodox Church. But, if we think in human terms, that is as unrealistic a viewpoint as a husband expecting that his wife will admit that she was wrong on every issue before he will forgive her. Anyone counseling the couple will clearly say to them that they both have committed sin against the other, and that there will be no resolution until both parties admit their sin. I am convinced that the same is true between the Orthodox and the Catholic. There has been sin on both sides. We cannot progress until we are willing to admit that possibility. We cannot heal the rift unless all sides come to the table in a spirit of humility.

I agree with the Russian Synod. Properly handled, ecumenism is a force for good. I agree that we are not giving up on our essential doctrines. But, at the same time I agree with the Russian Synod and G.K. Chesterton that all who call upon the name of Jesus are called to be One. There is no other acceptable option save what the Patriarch and the Pope have done, met together and spoken about what may be in the future, and on what things we may work together. 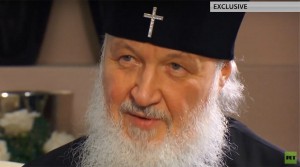