Source: Greek Reporter
Aggelos Skordas | 11 December 2014
In Corfu, western Greece, arrived at 11:00 am today Ecumenical Patriarch Bartholomew, who responded to the invitation of Archbishop Nektarios of Corfu, Paxos and Diapontia Islands to visit the island as part of the celebration of its patron saint, St. Spyridon, on this coming Friday, December 12. 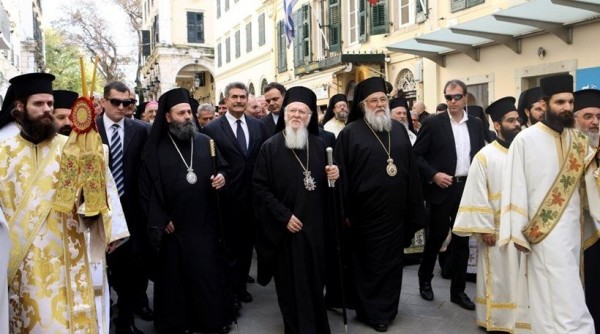 The head of the Orthodox Church was formally received by local authorities, church representatives and numerous citizens, schools and the island’s infamous municipal philharmonic band. Upon his arrival, the Ecumenical Patriarch expressed his feelings, saying that he was very moved, and highlighted that Corfu acts as crossroads of people and civilizations, neighboring to the west with Italy and to the east with Albania.

He noted that the Ecumenical Patriarchate’s mission is vital for the entire world and not just for Orthodoxy, sending a message of “ecumenical rapprochement and cooperation.”

Soon after his arrival, Bartholomew visited the St. Spyridon Cathedral, where the Saint’s sacred relics are being kept. Numerous events have been scheduled during the Ecumenical Patriarch’s four-day visit to the Greek island.

The last official visit of the Primate of the Orthodox Church to Corfu took place 51 years ago, in 1963, by the late Ecumenical Patriarch Athenagoras.

The opening ceremony of the Orthodox temple, named after the Christian Martyr, was performed by Archbishop Anastasios of…

Most viewed articles
Unbalanced Fears124
When We Do the Wrong Things Habitually118
Metropolitan Onuphry: “Do Not Be afraid of Demons, They Have No Power”97
The Tattoo on Our Being82
Delegations of Local Orthodox Churches Arrive in Kiev for the Celebration of Baptism of Rus68
350 Thousand Believers Take Part in Cross Procession in Kiev62
St John of Shanghai Summer Camp Concludes in Switzerland37
Most popular authors
Pravmir.com team263
Fr. James Guirguis124
Abbot Tryphon118
Fr. Andreas Agathokleous80