An Egyptian Christian jailed in Libya has been tortured to death in custody, an Egyptian human rights lawyer told Agence France Presse in Cairo on Monday, with demonstrators attacking the Libyan embassy in protest.

Ezzat Hakim Attallah “died after being tortured with other detainees” in the eastern Libyan city of Benghazi, said Naguib Guebrayel, a Coptic Christian lawyer who heads the Egyptian Union for Human Rights watchdog. 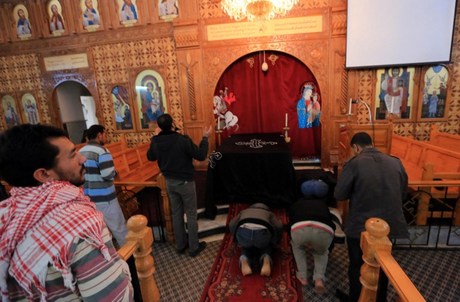 His accusation follows a report earlier this month that 48 Egyptian Christians had been arrested in Benghazi on suspicion of proselytizing.

The reported death of Attallah sparked angry protest outside the Libyan embassy in Cairo, where dozens of protesters gathered and threw stones at the building, a security official said.

The protesters, including relatives of Attallah and of those detained in Libya, also tore down the Libyan flag and broke the name-plaque of the mission.

And they chanted slogans hostile to the Egyptian government, which they say have done nothing to assist the Copts jailed in Libya.

“My brother Izzat was killed and the (Muslim Brotherhood) guide is responsible,” the protesters chanted, referring to the Islamist movement which President Mohamed Morsi hails from.

Guebrayel also charged that the Egyptian authorities had failed to intervene on behalf of the Egyptians arrested in Libya.

On March 1, a Libyan security official said the Copts were arrested on illegal immigration charges, although they were suspected of trying to to convert Muslims in Libya’s second city.

“Forty-eight Egyptian traders who worked in the Benghazi municipal market have been arrested based on reports of suspect activities,” the source told AFP in Benghazi, on condition of anonymity.

He said they were found in possession of a quantity of Bibles, texts encouraging conversion to Christianity, and images of Christ and the late Pope Shenuda of Egypt’s Coptic Christians, none of which were for “personal use.”

But the main charge was illegal entry into Libya, he said.

Four foreigners — an Egyptian, a South African, a South Korean and a Swede with a US passport — were also arrested in Benghazi in mid-February on suspicion of trying to convert Muslims to Christianity, something Islam strictly prohibits.

At the end of February, gunmen attacked an Egyptian Coptic church in Benghazi, assaulting two priests, according to the Libyan foreign ministry, which condemned the attack.

In December, two Egyptians died in a blast at a Coptic church in the Libyan town of Dafniya.

Coptic Christians comprise up to 10 percent of Egypt’s 83 million people and constitute the largest Christian minority in the Middle East.

Libya had as many as 100,000 Christians before the 2011 revolution but a few thousand only remain, according to church officials.