Coptic pope calls for calm and says the church is awaiting the outcome of investigations. 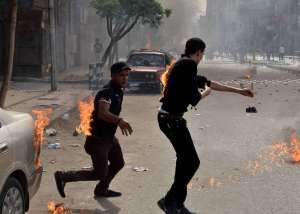 Two men try to put out their burning clothes after they were attacked by unidentified individuals outside the cathedral in the central Cairo neighbourhood of Abbassiya on April 7, 2013, following funeral prayers for four Christians killed in sectarian clashes
(AFP Photo)

“The Presidency asserts its firm rejection of heinous actions that target unity and harmony among the Egyptian people,” said the office of President Mohamed Morsi on its official Twitter account on Monday. “President Morsi ordered an immediate investigation into the cathedral clashes and said the culprits will be brought to justice,” it added. The presidency claimed it had issued directives to the Ministry of the Interior to take “necessary measures” to protect citizens and ordered an immediate investigation.

“President Morsi urged all citizens to avoid being dragged into unlawful acts that would jeopardise the nation’s security and stability,” the statement added.

Morsi called the head of the Coptic Orthodox Church to confirm that the state was following up on measures to protect the cathedral and the citizens in the area.

Prime Minister Hesham Qandil met with his cabinet on Monday morning to discuss proceedings for measures to be taken at the cathedral, reported state-owned Al-Ahram. The cabinet discussed accelerating a submission for stricter penalties for those carrying unlicenced weapons.

Qandil reportedly also spoke with Grand Imam of Al-Azhar Ahmed Al-Tayyeb and Pope Tawadros II to discuss ways in which such violence could be avoided in the future.

Pope Tawadros II addressed the unrest surrounding St. Mark’s Cathedral in Abbaseya, calling for calm. The pope said he was in constant contact with security officials, including Minister of Interior Mohamed Ibrahim.

The Coptic Orthodox Church announced that the pope, along with a number of bishops, would hold a wake and prayers on Thursday at 10 am for those who died during the turmoil.

“The whole Church pays its condolences to the families of those martyred,” said the pontiff on his official Twitter account. “[The Church] awaits the outcome of security investigations into this matter.”

The Muslim Brotherhood’s Freedom and Justice Party’s (FJP) official statement condemned the violence, blaming the attack on “dubious parties” seeking to create unrest that was “leading to widespread sectarian strife designed to drag the country into chaos that would benefit the enemies of Egypt and their associates, the corrupt criminals”.

A spokesperson for the party’s Alexandria branch and secretary of foreign relations Mohamed Soudan blamed the violence on Christians leaving the cathedral after a funeral which took place there on Sunday.

“The Copts then took their arsenal and started the violence, and it seems they were prepared for a civil war and not a common funeral,” Soudan said in his statement. “Do you think Christians are preparing for something?” he asked.

The National Salvation Front (NSF) condemned the violence, blaming President Morsi, the Muslim Brotherhood, and the Ministry of the Interior. “The [NSF] is demanding an independent and transparent investigation to find the instigators and perpetrators,” the opposition group said in a Monday statement. The Front called for citizens to refrain from violence and support national unity.

The Egyptian Social Democratic Party called the attack on the headquarters of the Coptic Church and its pope “dangerous and unprecedented,” calling for the dismissal of Minister of Interior Mohamed Ibrahim.

Misr Al-Qawia Party said that its chairman Abdel-Moneim Aboul Fotouh spoke with Bishop Moussa of the Youth Bishopric to express his condolences to victims of the violence.

Aboul Fotouh held the Ministry of the Interior accountable for failing in its role to protect the funeral, the place of worship, and public and private property.

The European Union High Representative for Foreign Affairs Catherine Ashton, who is in Cairo for talks with prominent political figures, also expressed her concern. “Tonight I am extremely worried about the violent incidents at the [cathedral] in Cairo. On hearing the news I immediately contacted the Presidency, strongly urging restraint and advocating for the security forces to control the situation,” she said in a statement.

The United States Embassy in Cairo also condemned the violence, supporting Morsi’s call for an investigation and expressing condolences to Egyptians who had been killed or injured. The British Foreign Office expressed similar sentiments.

Violence erupted at the cathedral on Sunday when mourners were leaving a funeral for Copts killed in Al-Khasous two days before when a fight escalated to sectarian strife.