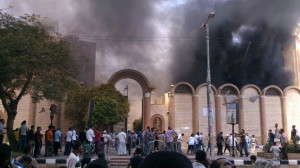 Egypt’s Copts and their churches are under siege as Islamists react to the military crackdown against pro-Muslim Brotherhood sit-ins. Several monasteries, churches, the Bible Society headquarters, a convent, and a Franciscan school have been burned, demolished or otherwise attacked in greater Cairo, Upper Egypt, Sinai and Suez, the independent MidEast Christian News is reporting in a series of detailed, horrific accounts.

Targets of the rioters are Orthodox, Catholic and Evangelical religious houses of worship and other religious sites, as well as private homes and property of the Christian minority. In some cases, Egypt’s security forces have protected the Christians from enflamed Islamist mobs; in many others they are failing to stop the mayhem. Several priests have also reportedly been assaulted.

The Copts are not part of the military assault against Muslim Brotherhood protesters in two of Cairo’s squares, and were but one of many factions of Egyptian society that supported the military’s ouster of President Mohamed Morsi. But, as Girgis Naiem explained here last month, the Copts have been scapegoated by the Muslim Brotherhood and other Islamists since the beginning of the July 3 military intervention.

QUESTION: So another thing which is on the scene, a local issue, but it was ignored for a while, which is like a lot of in the last few weeks at least, or the last week in particular, there are a lot of attacks on the churches in Egypt. I’m not sure if you are following it or the political process is more important than doing these issues.

MS. HARF: Well, we’ve obviously seen these reports and would express our deep concern about them. Clearly, any reports of violence we’re concerned about, and when it involves a religious institutions, are concerned about that as well. So we will continue speaking out against this and continue talking to all parties and all sides about renouncing this violence, about moving forward with a democratic process, and that dialogue is ongoing as we speak.

Beyond the general aim of “moving forward with a democratic process,” the Obama administration apparently has no policy specifically directed to help this religious minority. This can only mean it is either unwilling to use or has lost all leverage with Egypt’s military, which Secretary Kerry had so generously continued funding.

— Nina Shea is director of Hudson Institute’s Center for Religious Freedom and co-author of Persecuted: The Global Assault on Christians.