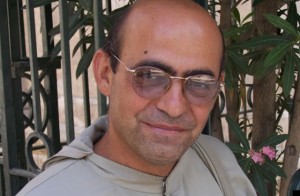 On June 23, Catholic Syrian priest Fr. François Murad was murdered in Idlib by rebel militias.  How he was killed is not yet known and his superiors “vigorously deny” that he was a victim of beheading, as some news sources are claiming.  It is apparent,  however, that he was a victim of the shadow war against Christians that is being fought by jihadists alongside the larger Syrian conflict.  This is a religious cleansing that has been all but ignored by our policymakers, as they strengthen support for the rebellion.

Affiliated with the Franciscan order that was given custody of the Holy Land sites by Pope Clement VI in 1342, the 49-year-old priest was killed in Gassanieh, in northern Syria, in the convent of the Rosary where he had taken refuge after his monastery was bombed at the outset of the conflict, and where he had been giving support to the few remaining nuns, according to Pierbattista Pizzaballa, the Custos of the Holy Land. The Vatican news agency Fides reports that “The circumstances of the death are not fully understood,” but, according to local sources, Fr. Murad’s building was attacked by the jihadi group Jabhat al-Nusra.

Fr. Pizzaballa denies that any Franciscans were beheaded last week, as was claimed by several sources. He was quoted in the Italian press, commenting about the video, “it seems like various old news stories have been mixed up.”  The video was “uploaded by al-Qaeda to terrorise Christians,” according to Andrea Avveduto, a writer who works with the Custody of the Holy Land. “The corpse of Murad was intact. The friars in the region exclude [sic] that the priest was one of the people beheaded in the footage.”  Avveduto also writes that “The friars are apparently alive and are currently in the Franciscan monastery of Latakia, where they arrived a few days ago, to bury the body of their brother, Fr. Murad.”

As I testified to Congress last week at a hearing on Syria’s minorities chaired by Rep. Chris Smith (R., N.J.): “Though no religious community has been spared egregious suffering, Syria’s ancient Christian minority has cause to believe that it confronts an ‘existential threat.’”

In fact, this was a finding last December of  the U.N. Human Right Council’s Commission of Inquiry on Syria. As in Iraq, Syria’s two-million-strong Christian community, the largest next to Egypt’s Copts in the entire region, is being devastated. Targeted by jihadist militias, they are steadily fleeing Syria, and whether they will be able to return to their ancient homeland is doubtful.

Christians are terrified by the Islamist militias and fear that in the event of their victory they would no longer be able to practice their religion and that they would be forced to leave the country. As soon as they reached the city [of Aleppo], Islamist guerrillas, almost all of them from abroad, took over the mosques. Every Friday, an imam launches their messages of hate, calling on the population to kill anyone who does not practice the religion of the Prophet Muhammad. They use the courts to level charges of blasphemy. Who is contrary to their way of thinking pays with his life.

Fr. Murad was only the most recent cleric to be targeted by these militias. The highest profile attack was the kidnapping by gunmen in April of Greek Orthodox Archbishop Paul Yazigi and Syriac Orthodox Archbishop Yohanna Ibrahim. This sent an unmistakable signal to all Christians: none is protected.

Some other examples of Syrian Christians, from various faith traditions, who have been kidnapped and killed or never seen again include:.

27-year-old Father Michael Kayal of the Armenian Catholic Church in Aleppo was abducted in February while riding a bus after Islamists spotted his clerical garb. He has not been seen since.

Greek Orthodox priest Maher Mahfouz was kidnapped around the same time and has not reappeared.

Syrian Orthodox parish priest Father Fadi Haddad was kidnapped last December after he left his church in the town of Qatana to negotiate the release of one of his kidnapped parishioners. A week later, Fr. Haddad’s mutilated corpse was found by the roadside, with his eyes gouged out.

Yohannes A. (whose last name has been redacted by Fides protect his family) was summarily executed.  An Islamist gunman stopped the bus to Aleppo and checked the background of each passenger. When the gunman noticed Yohannes’ last name was Armenian, they singled him out for a search. After finding a cross around his neck, one of the terrorists shot point blank at the cross, tearing open the man’s chest.

A woman from Hassake recounted in December to Swedish journalist Nuri Kino how her husband and son were shot in the head by Islamists. “Our only crime is being Christians,” she answers, when asked if there had been a dispute.

18-year-old Gabriel fled with his family from Hassake after his father was shot for having a crucifix hanging from his car’s rear-view mirror. The son told Kino: “After the funeral, the threats against our family and other Christians increased. The terrorists called us and said that it was time to disappear; we had that choice, or we would be killed.”

Christians and others also have been targeted by the courts of the “Caliphate of Iraq and the Levant,” the name the al-Nusra Brigade and other Islamist rebels use in reference to the Syrian territory under their control.

Muslims are subject to kidnapping too, but the Wall Street Journal reported on June 11, 2013 that often “their outcome is different” because they have armed defenders, whereas the Christians do not.  The Journal told the story of a 25-year-old cabdriver, Hafez al-Mohammed, who said he was kidnapped and tortured for seven hours by Sunni rebels in al-Waer in late May.  He was released after Alawites threatened to retaliate by kidnapping Sunni women.

According to the U.S. State Department, Syria now has scores of rebel militias with new ones popping up all the time.  Many are extremist. Sources toldAsiaNews, “[T]he purpose of these groups is not only the liberation of Syria from Assad, but also the spread by force of radical Islam throughout the Middle East and the conquest of Jerusalem.” According to interviews with local church leaders, many fighters do not speak Arabic and do not come from Syria, and are recruited by being told that they are going to “liberate Jerusalem.”

These extremists have wasted no time in establishing sharia courts. In the towns of al-Bab and Idlib and other villages under the control of Islamist groups, sharia has been enforced for the past year. These courts, according to a Washington Post report,  pass sentences “daily and indiscriminately” against Christians and anyone else who fails to conform to Wahhabi Islam. All women are required to cover up with the abaya, a black, full-length gown. It was in Aleppo that al-Nusra executed a 14-year-old Muslim boy last month for insulting the prophet; they shot him in the mouth and the neck.

Syrian Christian refugees told Dutch blogger Martin Janssen that their village of 30 Christian families had a firsthand taste of the rebels’ new sharia courts. One of Janssen’s accounts was translated by renowned Australian linguist, writer, and Anglican priest, the Rev. Mark Durie:

Jamil [an elderly man] lived in a village near Idlib where 30 Christian families had always lived peacefully alongside some 200 Sunni families. That changed dramatically in the summer of 2012. One Friday trucks appeared in the village with heavily armed and bearded strangers who did not know anyone in the village. They began to drive through the village with a loud speaker broadcasting the message that their village was now part of an Islamic emirate and Muslim women were henceforth to dress in accordance with the provisions of the Islamic Shariah. Christians were given four choices. They could convert to Islam and renounce their ‘idolatry.’ If they refused they were allowed to remain on condition that they pay the jizya. This is a special tax that non-Muslims under Islamic law must pay for ‘protection.’ For Christians who refused there remained two choices: they could leave behind all their property or they would be slain. The word that was used for the latter in Arabic (dhabaha) refers to the ritual slaughter of sacrificial animals.

As for the larger conflict, the Christians are caught in the middle.  The churches have not allied with the Assad regime.  They have no armed protector, inside or outside the country, and they have no militias of their own. But they are not simply suffering collateral damage.  They are being deliberately targeted in a religious purification campaign – one that the United States government finds convenient to overlook as it supports Syria’s rebels and praises Saudi Arabia as one of our “closest partners.”

– Nina Shea is director of the Hudson Institute’s Center for Religious Freedom.

August 14, 2013 Egypt’s Copts and their churches are under siege as Islamists react to the military crackdown…