Source: Christian Today
Andre Mitchell | 01 December 2016
A team of engineers in the Old City of Jerusalem are currently undertaking a special task that has been going on for decades now: restoring the place where Jesus Christ is believed to have been laid to rest after He died on the Cross. 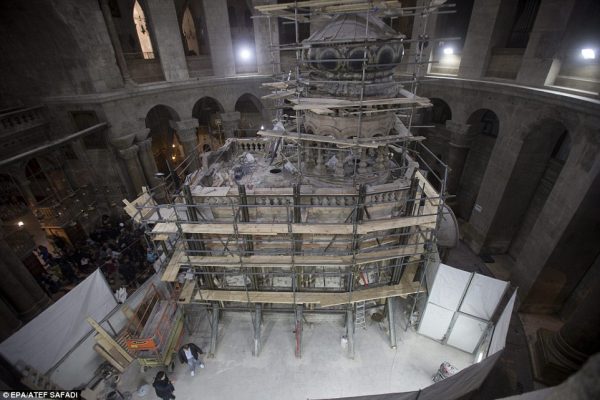 Images obtained by The Daily Mail showed the engineers injecting mortar around the marble slabs that encased Jesus’ tomb, which was opened last month for the first time since at least 1555 AD.

Restoration work on this important Christian artefact is expected to continue for at least the next five months. It must be noted that efforts to fortify Jesus’ burial place only started in 2008, or 50 years after representatives of the Greek Orthodox Church, the Roman Catholic Church and the Armenian Orthodox Church agreed in 1958 to preserve the limestone burial slab.

What caused the delay on this important effort? The three Church denominations had to consolidate efforts to collect the money for the burial slab’s restoration, which cost a total of $4 million.

In the 1940s, only iron bars were installed to support the structure, while the decades-long fund-raising was still ongoing.

Last month, the public got a rare glimpse of Jesus’ burial slab, after images were released revealing how scientists found the burial shelf intact and a second marble slab with a cross carved into its surface.

The limestone slab was opened and re-sealed in a span of 60 hours to allow scientists to extensively catalogue the surface of the rock. The artefact will likely remained sealed for hundreds or even thousands of years.

Fredrik Hiebert, archaeologist-in-residence at National Geographic, described how he fumbled and was filled with astonishment at the sight of such an important artefact.

“I’m absolutely amazed. My knees are shaking a little bit because I wasn’t expecting this,” Hiebert said, as quoted by The Daily Mail.

“We can’t say 100 per cent, but it appears to be visible proof that the location of the tomb has not shifted through time, something that scientists and historians have wondered for decades,” he added.

In an article posted on Desiring God, Christian leader David Crabb shared how the kingdom of God "is…