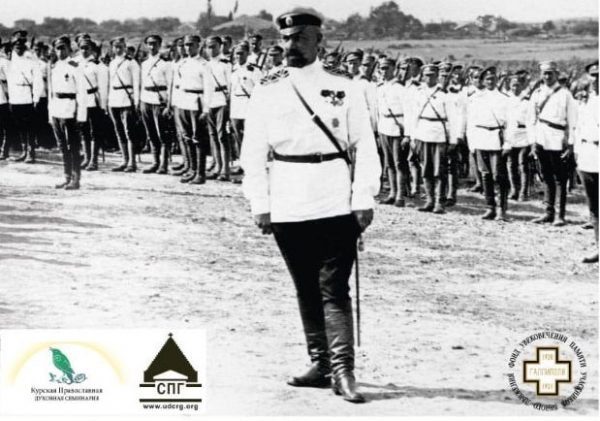 Archival photographs of the participants of the “Stand at Gallipoli” reveal their daily life in tents, their harsh conditions (turtle soup, pants stitched together from blankets, rancid canned food), but also their lofty spiritual culture. Despite their cramped circumstances, they organized theaters and a school and a dozen tent chapels. Empty cans served as candle-holders, analogia were made from empty crates, but Liturgy was regularly celebrated, providing spiritual nourishment to the Russian soldiers.

One part of the exhibition is devoted to the Hodigitria (Shower of the Way) of the Russian diaspora: the Kursk-Root Icon of the Mother of God “of the Sign,” its history and veneration among the Russians living abroad.

The exhibition, opening on September 23, 2019, in the city of Kursk, Russia, is titled “God is With Us, May Russia Rise Again!” It was organized by descendants of the members of the White Movement living in France, Belgium, Great Britain, Australia, the USA and other countries.

Alexei Pavlovich Grigoriev, President of the Union of Descendants of the Russians of Gallipoli (Paris), said “It is a great honor and joy for us to present this exhibition on Gallipoli on the holy ground of Kursk. It was here, near the city, that on September 8, 1295, the Kursk-Root Icon of the Mother of God “of the Sign” that we venerate so much and which we consider our diaspora’s Guide, was first discovered.

Archimandrite Simeon (Tomachinsky), Rector of Kursk Theological Seminary, said: “We continue to delve into the meaning and consequences of the October Revolution of 1917. Several million Russians forever lost their Homeland, but were able to preserve their faith and bear witness to it before other nations. This exhibition testifies to the power of the Russian character.”