Feast of the Three Hierarchs: the Obligations of Parents and Educators 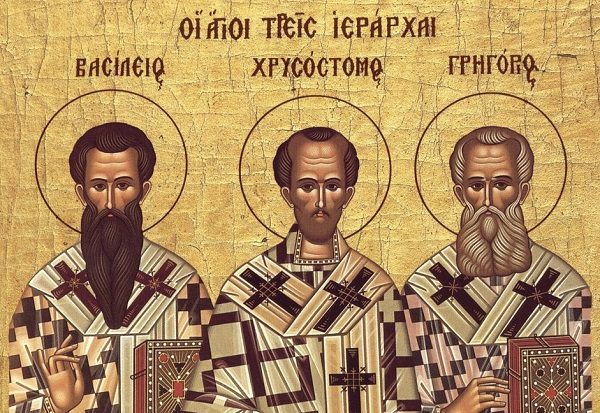 Today, February 12 (30 January), we celebrate the three hierarchs. There are lots of hierarch saints whom we honour throughout the year in the Church, but this is a feast of three together, although they also each have their own day on which we commemorate them. They’re Basil the Great, Gregory the Theologian and John Chrysostom. All three were important Fathers of the Church who strove to clarify and crystallize Dogma, for the unity of the faith and the needs of philosophy and letters. From about 1100, it’s been the custom to hold a common feast for them. This came about because of friction between Christians regarding the importance of each of them separately. The common service was written by Ioannis Mavropous, Bishop of Euchaita.

Saint Basil, Bishop of Caesarea, was one of the greatest theologians. He wrote the Divine Liturgy bearing his name, which is celebrated on his feast, 1 January, and at others times during the year, as well as a whole host of other works. He studied philosophy and other disciplines in Athens. He’s still remembered among the Orthodox for his charity work, to the extent that even today, in Greece, carols referring to it are sung at New Year. He founded Vasileiada, a whole town, with a hospital, orphanage, poor house, old people’s home, a school, and structures to assist those down on their luck. Alas, the consumer society has replaced him with the jolly, portly, Santa Claus.

Saint John, known as Chrysostom [χρυςόστομος =‘golden-mouthed’], was Patriarch of Constantinople. He was given the sobriquet Chrysostom because he was a charismatic orator and his discourse was as precious as gold and as sweet as honey. His charitable work was monumental and the soup kitchens he organized fed 7,000 people a day. Being a man of formidable education he used the dialectic method of Greek philosophy in order to develop a systematic theology. He was an ascetic and denounced illicit practices, even on the part of the emperors. As a result, he was exiled three times. In the end, he succumbed to his hardships, but has a lofty position in the Orthodox calendar of saints.

Gregory the Theologian, from the town of Nazianzos, was Patriarch of Constantinople in the 4th century. He was a friend and fellow-student of Basil the Great and his brother Saint Gregory of Nyssa. He, too, was highly educated and believed education to be a benefit of the highest value. He wished to bridge the gap between the Greek-speaking and Latin-speaking theologians of his time. He also wrote a good many poems on theological and moral subjects.

As we can see, the features common to these three personalities were: their great love of learning and letters; their theological and philosophical brilliance; their contribution to dogmatic truth and the true faith; their devotion to works of charity; and the ascetic life they led. What more appropriate, then, than holding a common feast for these three great luminaries of the Triune God?

In 1826, Frederick North, 5th Earl of Guilford, the founder of the Ionian Academy, and Konstantinos Typaldos established the day of the feast of the Three Hierarchs as a day dedicated to Greek and Ionian education, and as a result it’s a national holiday for all educational establishments in Greece.

In concluding this brief reference to the work of the Three Hierarchs, let’s bear in mind two points. The first is directed primarily to parents and the second to educators, but each applies equally well to the other. First, there’s the matter of providing proper guidance for children. Just as the mothers of the Three Hierarchs, Emmelia, Nonna and Anthousa, inspired their children with love for God and other people and nurtured all the higher sentiments in their souls, so parents today are obliged to do the same. Secondly, proper education. Let’s forget, for the moment the specialization of our times and our supposedly hermetically sealed education. Let’s talk instead about the Education, classic and well-rounded, that people should be offered. Education which includes knowledge of human civilization. Naturally, nowadays you can’t master a number of disciplines, as you could have at the time of the Three Hierarchs, because so much has changed since then. Now, everyone is educated to become whatever it is they want to be. But Education is so much more than professional specialization. Education shapes our inner world, gives us the power of reason and helps to elevate our spirit, within the human context.

For the Three Hierarchs, however, secular education and theology are intertwined and thus provide us with the opportunity to elevate the spirit above and beyond the human context. Educators have a duty to move towards this direction. To provide students with knowledge, not merely dry facts. They should provide them with opportunities for a productive, dialectical approach to the world. They should inspire them with a love of learning, including love for the divine writings, which have been so blatantly removed from Education. Appointed servants of the state have no right to impede or mock students whose parents took them to church to have them baptized.