Then, over time, something begins to happen. You don’t see them at Vigil anymore. Confession becomes an irregular thing, and when they do confess, you hear of how they don’t pray as they use to pray, don’t fast as they use to fast, and don’t read as they use to read. You begin to see less joy on their faces, and they talk of boredom and spiritual dryness. Finally, the day comes when you don’t see them at all. What happened?
Archpriest John Moses (+2019) | 30 June 2010

A farmer once had a mule that was the hardest working mule that any farmer ever had. All of the farmers in the area would marvel at the strength and stamina of this mule, and what amazed them the most is that no matter how hard the farmer worked him, the mule never seemed to balk or complain like most mules. Clearly, the wealth and success of the farmer rested on the back of this faithful animal.

One day, while working in the barn, the farmer got to thinking of his success and wondered how he might increase his profits. The land was producing all it could, so what else could be done? Then he thought, “What if I reduced the amount of grain that I give to the mule; I wonder what would happen?” So, the next morning he cut the amount of feed by one quarter. Sure enough, the mule worked just as hard and didn’t complain. Then a week later, he cut the grain by a third and again, the mule continued to work. The following week, he cut the grain in half. The mule seemed to go a little slower, but all in all, the work was good. The farmer became pleased with his plan since he saved a bit of money on the feed. This went on for a quite a while.

Finally, the miserly farmer cut the feed by three-fourths. The mule struggled and labored but refused to give up and would not complain or balk at the yoke. Then, one morning, the farmer came out to yoke the mule, and found him dead in the stall.

The moral is simple: feed the mule. 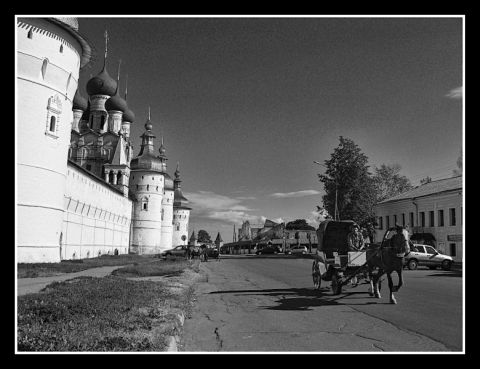 You would think that such a thing would be a no-brainer: take care of what is most important. Yet, I have witnessed the tragedy of “cutting the feed” to the important things of life. I’ve seen it happen in families, in churches and in the hearts of Orthodox men and women.

Romance is a wonderful thing and couples start their life together with so much hope. They feed each other with love and affection, ideas, hopes and dreams. It seems that the future will always be bright. Then over time, something begins to happen. There is less romance, less affection, and less communication. He doesn’t bring flowers like he used to; she doesn’t make his favorite foods; he spends a lot of time in front of the TV; she is always too tired to be affectionate; he always finding fault; she’s always nagging; they rarely pray together. Well, after all, life is filled with work and demands and there just isn’t time for all of that romance stuff.

In the beginning, he truly wanted to love her as Christ loves the church, to serve her and to give his life for her. Now, he’s always angry and sullen and non-communicative because she just doesn’t give him what he believes he wants and needs. She always meant to his partner, to stand by his side and to be his helpmate, lover and friend. Now she’s lives in continual frustration because what she needs most is to talk and to share, but he just won’t talk to her and tells her to stop nagging him.

It’s so easy to console yourself with the thought that there’s no need to worry because, after all, you have a good Orthodox marriage and so the commitment is there. While it’s precious to have an Orthodox marriage, it’s easy to fool ourselves with platitudes. Certainly, true love is more than romance, but let’s not fool ourselves. Look, I buy an automobile because I believe that it is a good automobile, yet what keeps it good is maintenance. I have to change the oil, get a tune up, rotate the tires, fill the tank, wash the outside, clean the inside, and have it inspected yearly if my good automobile is to remain good. Without regular maintenance, the good car will not remain good for very long. In the same way, a good marriage will only remain good with regular maintenance. Its funny – we understand the necessity of feeding the machines, but we do not feed the people we are supposed to love. We fail to feed the mule.

People begin their life in the Orthodox Church with so much hope. They feed on the love and affection of God, the beauty of the liturgies, and the warmth of fellowship. They discover new ideas, share hopes and dreams, and communicate their enthusiasm with everyone. The future looks bright indeed. They have every intention of going the distance with the Lord. Then, over time, something begins to happen. You don’t see them at Vigil anymore. Confession becomes an irregular thing, and when they do confess, you hear of how they don’t pray as they use to pray, don’t fast as they use to fast, and don’t read as they use to read. You begin to see less joy on their faces, and they talk of boredom and spiritual dryness. Finally, the day comes when you don’t see them at all. What happened? Usually the answer is that they starved their soul, but not all at once. They cut the feed slowly-a little here, a little there. In the end, the mule died from neglect.

Have you fed the parish mule? People love their priest and they will tell you that their priest is the greatest. They marvel at the hours he spends in ministry. Yet, I wonder if you ever thought that the priest and his family must also be fed, just as they try to feed you?

I have had the privilege of hearing the confessions of some priests and I wonder at the pain in their hearts. They mostly confess how unworthy they feel to be a priest, but often part of the pain is that their congregations don’t feed them. You see, it’s easy to enjoy the fruits of the labors and struggles of the “parish mule,” but when was the last time you fed the mule? How can you do this? First, words of encouragement are like bread to priests. Most priests I know would be profoundly shocked if someone came up and said, “Father, I’m praying for you and Matushka, and I want you to know that I’m here to help.” Preparation is like bread to priests. Many priests would be delightfully shocked if they discovered that those in attendance at a Liturgy had taken the time to read the Bible texts before the service and had studied the saints who would be commemorated. Regular attendance is like bread to priests. Does a priest need a full church to feel good about priesthood? No, but I can’t begin to tell you how poor attendance begins to wound the heart of a priest.

On a practical basis, I know of priests who have a very low salary, and even worse, they haven’t had a pay raise in five years even though the cost of living has greatly increased. Most priests I know are not covetous or money hungry, but when congregations make it possible for a priest to meet the needs of his family, it’s like bread to the soul of the priest.

Despite the cut in feed, the priestly mule continues to work, often without complaint. Yet, if this continues, will we someday find that the mule has died? St. Paul put it this way: “Don’t muzzle the ox that treads the corn.” (I Corinthians 9:9) Therefore, if you love your priest and his family, tell them. Let them know of your prayers for them, and show them you care by your presence, gifts, and service. These things will feed your priest far more than simply praising him for his good work. It will keep the mule strong for the work ahead.

I am guilty of cutting the feed to my mule. I have a soul that has served me well for almost 60 years. There was a time when my soul was fat and my body was thin. Over time, I began to cut the feed to my soul – less time in prayer, less time in Church, less time in study, less time serving others, and so on. Oh, I made sure that I fed my body well. Now my body’s fat and my soul is thin. So I wonder – will the mule be able to pull the plow when the ground gets hard? Will I have any strength of soul when the testing comes? My soul may be weak, but it’s not dead yet. What should I do?