Ferdinand and the Raging Bull

We can't keep playing with sin and hope for the best. The root of sin, which is the guilty thought, has to be eradicated. "O daughter of Babylon, [...] happy shall he be, that takes and dashes your little ones against the stones" (Ps 136: 8). The "little ones" are the thoughts that grow in our minds, tormenting and pushing us to do or worry about things that we should not.
Fr. Vasile Tudora | 18 September 2010 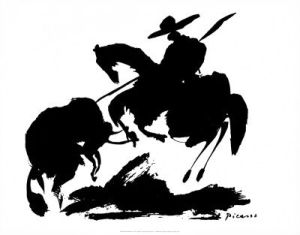 Reading the news can be a source of inspiration and sometimes even an enlightening experience. For instance a recent news flash from Spain, about a bull that jumped 10 yards into the audience of a Spanish bullring injuring 40 people, curiously made me think that life, in a way, is like a bullfight, a “corrida de toros”.  Many times we know how dangerous or harmful some things may be to us, yet, we keep doing them or we resolve to enjoy them from the audience, with the illusion of safety.

Getting involved in something however, even from a distance, still counts as participation and inherits all the risks associated. Even if we openly avoid doing certain things that we might consider inappropriate on a superficial moral level, we still take pleasure, admittedly or not, in the decadent show of our society. We have the option to withdraw from it completely at anytime if we want to, but many times we prefer to settle with a platonic voyeuristic attitude. We do not play the “matador” but we still care for a bloody bullfight.

With this outlook we allow to pass by us many things that we should not be part of, dismissing them as items that are beyond our scope of authority and continue to observe them with a guilty, distant involvement. The Scripture however bluntly contradicts this attitude: “But I say to you, that whoever looks on a woman to lust after her has committed adultery with her already in his heart.” (Mt 5:28)

If we are serious in our rejection of sin we should also stop endorsing it, “no one cannot serve two masters.” (Mt 6:24) If you don’t like a bullfight why are you even buying a ticket in the arena? Of course you are safe in the upper stalls, but you are still on the inside, supporting, rooting for the fight and secretly hoping for blood.

Why are we then surprised when things go bad and we get hurt? The moment we chose to take on a risk we also took on the possibility of getting injured.  You don’t have to dodge a bull dressed in some crazy costume to get hurt; one can get hurt even in the stands, as we just saw.

We can’t keep playing with sin and hope for the best. The root of sin, which is the guilty thought, has to be eradicated. “O daughter of Babylon, […] happy shall he be, that takes and dashes your little ones against the stones” (Ps 136: 8). The “little ones” are the thoughts that grow in our minds, tormenting and pushing us to do or worry about things that we should not.

Any temptation starts small, allowing you to get accustomed to it, and then, when you are hooked, devours you completely. St. Nicodemus in his “Unseen Warfare” talks about this work of the devil.

“The devil resembles an ant-lion since he always begins a man’s ruin by first casting him into small sins, just as an ant is small, and then, when the man becomes accustomed to such small sins, he casts him into greater. So equally the devil at first seems as weak and small as an ant, and later he appears like a powerful giant – a great lion”

Fondling with sin will not do anything but decrease our sensitivity to its great repercussions. Like in a bullfight arena, we buy first a ticket up high, playing it safe but the more we go the more courageous we get, going foolishly lower and lower, until one day a ragging bull breaks loose and hurts us, right when we were thinking that nothing bad could ever happen.

One of the major problems we face today is that the world around us is loosing the concept of sin entirely. The psychologists take all blame away from us claiming that we are conditioned by our animal instincts; we have an innate predisposition to hunt, mate, feed, dominate etc; so we are attracted by things that fulfill these deep, subconscious desires. This way of thinking accounts however only our animal side. Man has been also blessed with rationality and spirituality, which, put to good use, can control these instincts and free man to pursue his real spiritual potential. The simple fact that we can do something does not mean that we should; all things might be lawful, as the apostle says, “but not all things build up.”(1Co 10:23)

Keeping the bullfighting metaphor, man should reflect more on Ferdinand, the powerful bull which, totally turned off by the temptations of the arena, chose to retire himself in the contemplation of nature, smelling flowers and listening to birds. It was his choice to keep himself out of his excited pack of bullying peers, not because he was weak or afraid, on the contrary, because he was twice strong, in body as in will.

Control however is a faculty that doesn’t always come naturally and for most of us needs to be cultivated; learning to tame the animal in you is not as easy as it sounds. That is the reason why the Church recommends moderation, fasting, vigils and other exercises that promote self-discipline. Only following this path the seeker will learn in time to control his affects and eventually will reach a stage where all the temptations will leave him cold and unmoved.

Until this moment however, we cannot allow our guard to go down with the illusion that we are ready to face anything that comes our way, for only “he who guards his way guards his life” (Pro16:17). The option will always be there: enter the ring of the raging bulls of sin, assuming the great danger of spiritual injuries or, take a detour to avoid sin and concentrate on the things that matter and “build up”. Taking this good decision however is not just a matter of will, we cannot trust in our ability to make this choice alone at all times, but “the Lord gives strength to his people”  (Ps 29:11) and in His help lies all our hope.