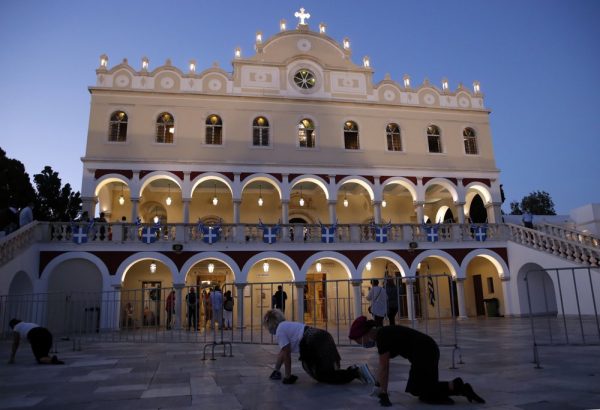 Pilgrims crawl in front of the Holy Church of Panagia of Tinos, on the Aegean island of Tinos, Greece, on Friday, Aug. 14, 2020. AP Photo/Thanassis Stavrakis

In twos and threes, in small groups or alone, they came. Most walking, many crawling, ignoring bloodied knees and aching arms to climb a hill to the famed church housing an icon of the Virgin Mary believed to perform miracles.

Some wept openly, the anguish of their personal strife painted on their faces. All stopped and bowed their heads, many leaning over to kiss the icon.

For nearly 200 years, Greek Orthodox faithful have flocked to the Aegean island of Tinos for the August 15 feast day of the Assumption of the Virgin Mary.

The annual celebration is normally a resplendent and crowded affair, with a navy band and honor guard leading a procession carrying the icon down the hill from the church to the port. Thousands pack the broad flagstone street, kneeling and waiting for the icon to pass over them.

But this year there was no procession or massive crowd, the ceremony — like so many lives across the globe — upended by the coronavirus pandemic.

Instead, the icon stayed inside the church. The navy band and honor guard remained in the church courtyard, and police reminded the faithful to wear masks. Inside, an attendant disinfected the glass case containing the icon after each kiss. 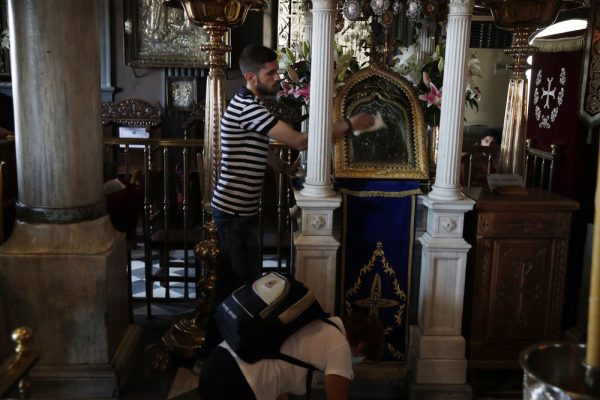 A worker cleans an icon believed to perform miracles as a pilgrim crawls inside the Holy Church of Panagia of Tinos, on the Aegean island of Tinos, Greece, on Thursday, Aug. 13, 2020.
(AP Photo/Thanassis Stavrakis)

Greece is experiencing a resurgence of the virus, with new daily cases jumping from the low double digits at the start of summer to more than 200 over the past three days. Authorities have tightened restrictions and police are enforcing the measures. 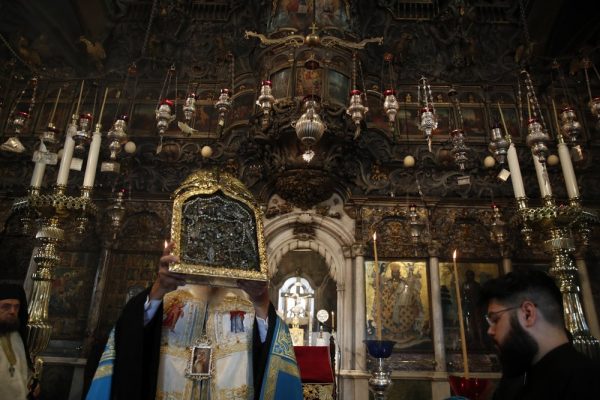 Metropolitan Dorotheos of Syros and Tinos lifts the miraculous icon during a service in the Holy Church of Panagia, on the Aegean island of Tinos, Greece, on Thursday, Aug. 13, 2020.
(AP Photo/Thanassis Stavrakis)

“Every Christian has the Virgin Mary as their mother, and that is something that is very important in our lives, in our difficulties, in our needs,” explained Metropolitan of Syros and Tinos Dorotheos, the regional bishop who led Saturday’s church service. “We turn to her as a small child turns to seek security in its mother’s embrace.”

Pilgrims’ beliefs, he said, are not affected by coronavirus restrictions.

“The faith of people is not tested by these things, which are temporary and ephemeral,” Dorotheos told The Associated Press. “Neither the masks nor the maintenance of social distancing have reduced the faith of the people and their piety, and their presence here in Tinos.”

The icon itself was uncovered in a field in 1823, two years after the start of Greece’s War of Independence from the Ottoman Empire and as a plague swept the island. The official history relates that excavations began after a local nun had visions telling her where to look. A series of miracles are attributed to the icon, including the end of the plague on the island and numerous healings of the sick.

Since then, the faithful have flocked to see the icon, to touch and kiss it, bringing votive offerings that decorate the church and the icon itself.

For Danou Chrysovalantou, it was her 12-year-old daughter’s survival from open heart surgery last year that brought her to Tinos. Crawling up the hill on her hands and knees, she broke down in sobs when she reached the icon, muttering prayers as she leaned over to kiss it.

“The Virgin Mary is very important to me,” the 47-year-old said. “Whatever I ask for, she listens, and I thank her for it.”