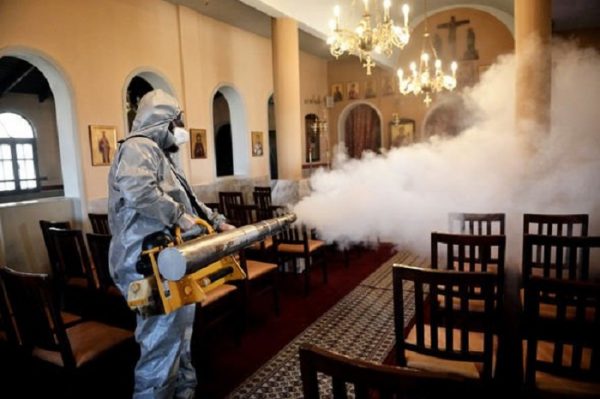 Workers disinfect a church in Greece this Spring after the outbreak of the coronavirus pandemic. File Photo

On Friday, the Greek National Health Organization, EODY, announced a total of 151 coronavirus infections in Greece, with the vast majority of them — 144– being of domestic origin. Only seven of the cases detected since Thursday were detected at the country’s entrance points.

According to Greek Reporter, Nikos Hardalias, the Deputy Minister for Civil Protection and Crisis Management, announced on Friday that all activities, including religious services, for the August 15 Feast of the Assumption of the Blessed Virgin Mary, a major festival time in Greece, will be cancelled this year out of an abundance of caution.

This emergency measure, he said, was necessary due to the enormous numbers of people who celebrate this major feast day and who attend the many festivals associated with the Feast. This ban also extends to fairs and nighttime entertainment, and all the usual processions of August 15.

The Deputy Minister said that this difficult decision was made following a recommendation from Greece’s Committee of Infectious Diseases as well as the Holy Synod of the Church of Greece, regarding the banning of the religious events and festivals.

Hardalias also noted that citizens of the island nation of Malta will be banned from entering the country from this point on unless they can prove a negative virus result (PCR) in a test which must have been taken up to 72 hours before their arrival in Greece.