First Sunday after State of Emergency in Romania 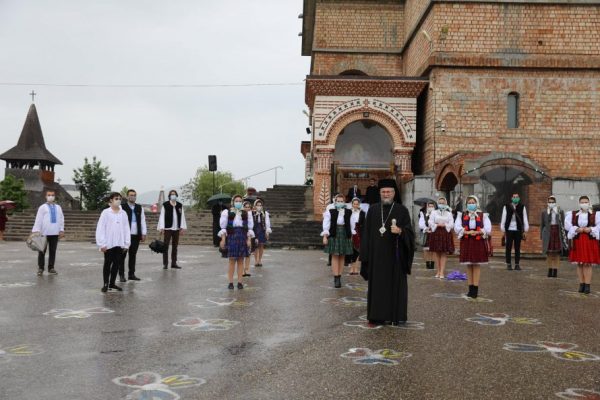 This Sunday was the first Sunday Liturgy celebrated in churches across Romania with the participation of the faithful. Priests and parishioners found themselves with emotion and joy after the end of the national state of emergency. Many parishes prepared their courtyards with specific marks to help keep the social distancing requirements, drawing colourful flowers on the pavement.

At the beginning of the state of emergency, Patriarch Daniel asked the faithful to respect the sanitary rules and to wait patiently for a while before returning to ecclesial communion, as requested by authorities.

Meanwhile, His Beatitude called for other forms of communion: communion through prayer and good works. He also mentioned spiritual almsgiving, performed by “forgiving one’s neighbour and reconciling oneself to all whom we have upset.”

Thus, for a short time, as the Patriarch of Romania said, the houses of the faithful became “family chapels” which, through prayer, kept in touch with their parish churches. However, it was not easy for the faithful or their shepherds, deprived of the joy of full communion.

At the expiration of the state of emergency, church servants gladly prepared to greet their congregations, some drawing inspiration from churches in Georgia, where believers maintained a distance standing in flower-drawn marks depicted on the pavement of the church courtyards.

Churchyards have become a true celebration of colour, as evidenced by many photos published last week. Among them, the Orthodox Cathedral of Baia Mare, which waited for its faithful with flowers drawn in the colours of the tricolour (opening photo below):

The response of the believers was as expected. A photographer caught people in tears in the courtyard of St John Jacob the New Chozebite Parish from Floresti, Cluj County:

Believers expressed the same emotion and joy on social networks. “Community, communion, faith and Christ. In our midst and in us. Welcome back home, to the Church!” wrote Oana Moșoiu, a lecturer at Bucharest University, in a post on Facebook on Sunday.

Mona Șerbănescu, director of the Orthodox Pedagogical High School “Anastasia Popescu” in Bucharest, commented referring to God, the Source of Life: “I say that I left only physically. It was like a deeper breath today! We had the Spring close to us.”

“As long as our lives unfold in the light of Christ, there will be no shortage of opportunities for joy. Last Sunday was such an occasion,” said Dr Nicolae Dobre, telecommunications specialist, in a message sent to the Basilica News Agency.

“We had the joy of chanting together ‘Christ is risen!’ – the most beautiful hymn of Christianity. I felt the joy of the overwhelming presence of the Saviour again, fulfilling His promise still: “For where two or three are gathered together in my name, there am I in the midst of them (Matthew 18:20),” he added.

The engineer, a parishioner of the Brâncuși Parish in Bucharest, noted that the most recent Divine Liturgy gave him hope and the confidence that God cares for us and that the vicissitudes of the times will not overcome his Church. Here is what the Sunday Divine Liturgy at his parish looked like:

“On Sunday morning I went to the chapel where for four years I have been giving answers at the chant stand with my friends. They were almost all there, touched by the raindrops, cold, but happier and more excited than ever that we could give glory to God for everything. Our trembling hearts and voices were in unison and sounded so beautiful!”, said with excitement Georgiana Nistor, a student from Iași.

“I felt that true communion exists only in the Church because only there can you fully meet Christ,” said Iuliana Pîrvu, her colleague, who participated on Sunday in the Divine Liturgy celebrated at the Three Holy Hierarchs at the Pedagogical College in Iași. “It was a great joy to see how faith unites people in the same spirit, in the same mind,” she said.

“I felt in communion with other people and an active participant,” said Alexandru Ghiuruțan, a student at the Technical University of Cluj-Napoca. “I realized that the difference between watching the Divine Liturgy on TV and going to the service is like the difference between watching a show about cooking and cooking and tasting the dishes in fact,” the student added.

“What could be more beautiful than being in a mountain village in northern Bukovina, after two months of social distance, meeting everyone, young and old, parents and children, in the Church? The life of the community revolves around it. I have felt this now,” said Iulian Tomeac from Brodina, Suceava, who is a student at the “Dumitru Stăniloae” Faculty of Orthodox Theology in Iași.

After investing thirteen priests from the Archdiocese of Bucharest as spiritual fathers, His Beatitude Patriarch Daniel explained why…

Patriarch Daniel: The Tabor Light, perceived by the Hesychasts, is sought by every Christian enlightened at baptism