First visit to Archbishop Jovan of Ohrid, in the Idrizovo prison 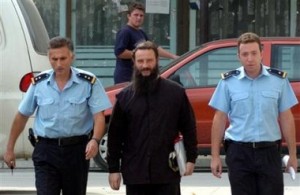 On December 12, 2011, His Beatitude Archbishop Jovan of Ohrid and Metropolitan of Skopje was imprisoned in the Idrizovo prison, near Skopje.

After one year and almost nine months in a prison cell, Archbishop Jovan of Ohrid was for the first time given the opportunity for a one-time visit of his brothers Bishops of the Orthodox Ohrid Archbishopric, in the visiting area of the Idrizovo prison.

On August 23, 2013, Their Graces, Bishop Joakim of Polog and Kumanovo and Administrator of Debar and Kicevo, Bishop Marko of Bregalnica and Administrator of Bitola and Bishop David of Stobi and Administrator of Strumica, visited His Beatitude Archbishop Jovan of Ohrid and Metropolitan of Skopje, and had brief conversation with him, conveying to him the love, but also the plead of the faithful people, for his blessing and prayers.

Archbishop Jovan of Ohrid ensured the Bishops that he was feeling slightly better with his health, and he sends to all members of the Orthodox Ohrid Archbishopric his archpastoral blessing, encouraging them to keep their joy always, in the various life circumstances.