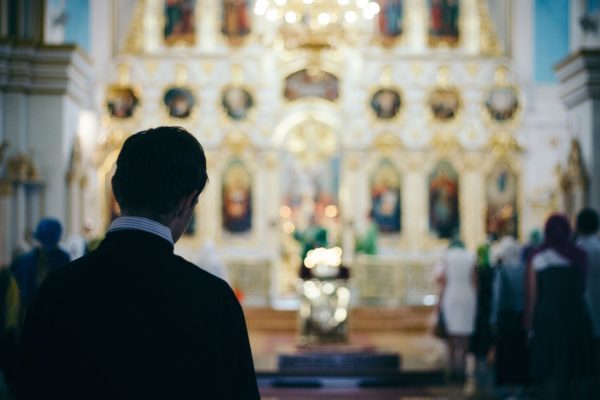 Years ago when I was traveling by car through the countryside of Syria a charming scene caught my eye. On a hillside across from a narrow river a shepherd and his flock were moving along lazily. Such sites were familiar to me growing up in rural Greece. But this pastoral scene in Syria was different. Unlike the shepherds in Greece who follow after the sheep, that Syrian shepherd was at the front of his flock. He was leading the flock, and the flock was following him!

It was a stirring site as I remembered the words of Jesus about the Good Shepherd. “When he has brought out all his own [flock], he goes before them, and the sheep follow him, for they know his voice. A stranger they will not follow, but they will flee from him, for they do not know the voice of strangers.” (John 10:4-5) When Jesus spoke these words long ago about how the shepherd goes ahead of the flock, He was actually describing a timeless custom of Middle Eastern shepherds.

Today’s Gospel reading (Mark 8:3-9:1) introduces a different context. It is not a context of peace and serenity as that of the Syrian shepherd and his flock. Instead it is a context of a great challenge and sober consequences, a context of ultimate concerns and the salvation of souls. But the text does invoke images of Christ as the Good Shepherd who goes ahead of His flock, leads them, and calls them to follow Him.

Christ told the disciples that not only He, the Good Shepherd, would suffer, but that they too as His followers would meet with persecutions and even death. He was the first to go ahead and lead. He was the first to carry the Cross, to walk the path of trial and affliction. But those who chose to follow His path, to be loyal to Him, to be His flock, would also suffer. The cost of discipleship would be high and the stakes also high: the salvation of our souls.

The words of the Lord resound powerfully: “If anyone would come after me, let him deny himself and take up his cross and follow me … Whoever would save one’s life will lose it; and whoever loses one’s life for My sake and the Gospel’s will save it … What does it profit one to gain the whole world and lose one’s soul? … What can one give in return for one’s soul? …Whoever is ashamed of Me and of My words in this adulterous and sinful generation, of him will the Son of man also be ashamed, when He comes in the glory of His Father with the holy angels.” (Mark 8:34-38)

Christ said “For my sake and the Gospel’s.” He put Himself at the center of what mattered most in life. He was God’s final revelation to the world. He came not only to preach the Gospel but also to exemplify the Gospel by faithfulness, obedience and self-sacrifice. The message of the Gospel is nothing less than the message about Christ Himself and what He accomplished for our salvation. He is the fulness of God’s presence in history. He is the incarnation of God’s love and forgiveness for the world. He is the foremost witness of God’s truth for which He suffered and died on the Cross.

One might ask why the Cross? Christ came to the world to proclaim God’s love and forgiveness. Why then so much opposition and hatred against Him leading to the anguish and humiliation of the Cross? And why did so many of the early Christians, who preached God’s grace and love for humanity, why did they suffer afflictions and martyrdom?

The Evangelist John has given us the answer when he writes: “God sent the Son to the world not to condemn the world, but that the world might be saved through Him . . .And this is the judgment [of God], that the light has come into the world, and people loved darkness rather than light.” Why? “Because their deeds were evil” and they did not want them exposed by the light (John 3:17-19).

“People loved darkness rather than light!” A tragic assessment of the human condition. They accused Christ of being a blasphemer and perverter of the ways of God. Likewise, they branded the early Christians as “atheists” for not bowing down to worship the statues of pagan deities and of the Roman Emperor. Evil can use the most sacred instruments, even religion, to carry out its pernicious purposes.

Today most of us do not have to fear physical persecution or bodily harm for choosing to follow Christ and to be part of His flock. There are many faithful Christians in other parts of the world though, for example in the Middle East, India, Pakistan and in Africa, who face suffering and death on a daily basis. We must keep them in our prayers. We must help them. We should learn from their faithfulness and loyalty to Christ the Good Shepherd.

We face other forms of trials and other ways of carrying the Cross. Perhaps the greatest cross is to see and endure what is happening to our children. They are inundated with images and messages from social media which often perplex and confuse them, and sometimes cause them to harm themselves. All the while we as parents and grandparents appear to be helpless to help our vulnerable children over against the immense pressure of secular society.

The answer of course is the Christian family. Thank God for Christian families who fight against the tides of disbelief and wickedness in society. It is said that only live fish can swim upstream against the flow of a river. Strong Christian families are grounded in strong Christian marriages. In the sacrament of marriage it is the Christian couple themselves who are God’s living sacrament, who share in mutual love and commitment, who strive to do God’s will in the family, in the Church and in the world. God bless our families and strengthen them to grow and to flourish in the life of faith.

The answer too is in the choice of faith and life that each one of us makes. Christ said “For my sake and the Gospel’s.” He called us to put Him at the center of our lives. He called us to deny ourselves and to follow Him. This denial is not merely a denial of individual things. For example, I will give up eating this particular food for Christ. I will give up some screen time for Christ. I will watch my language for Christ. Such denials may be helpful and healthy to the life of faith, but it is not the kind of denial that Christ was talking about.

Nor is it a denial of our deep self as created in the image and likeness of God. It is not a call to try to erase our self-consciousness and to negate our true self. In such cases we would lose identity and be a virtual nothing, a zero, of self-awareness. To the contrary God loves even our sinful selves and calls us always to love our neighbor as we love, cherish and take care of ourselves with His help.

“For my sake and the Gospel’s.” Christ calls for a decisive change of orientation of the self, a radical switch of outlook from purely worldly values and pleasures to Christ-like values and attributes. Think and do things to honor Christ. Think according to the thoughts of Christ in order to acquire the “mind” of Christ. Act according to the example of Christ in order to grow into the likeness and maturity of Christ. Love as He loved in order that we may abide in God’s love for “God is love, and whoever abides in love abides in God, and God abides in him.” (1 John 4:16).

But how can I think, speak and act like Christ when Christ was God on earth and I am a weak and fragile human being? Imitate Christ, the saints teach us, insofar as it is possible for us to do so. The starting point is the Gospel, its power, its blessings, its virtues. “The Gospel is the power of God for salvation to everyone who has faith . . .for in it the righteousness of God is revealed through faith for faith.” (Rom. 1:16-17)

What is the biggest problem in our nation today? What lies behind all the anger and the division? Is it not the obsession with self-assertion, our stubbornness and pride, our lack of understanding and forgiveness for each other? Is it not the constant clamor for rights instead of equal attention to our responsibilities as citizens?

We Americans are passionate about freedom. However, the evident obsession with self, our stubbornness and pride to conquer and smash our opponents at all costs, leads us not to actual freedom in which to flourish as a nation. Rather our irrational individualism leads us to deeper captivity to the sinful self and the evil passions of self, pride, anger, jealousy, vindictiveness, self-righteousness, and hatred of the other, which corrupt and denigrate our common life. We prove true Christ’s warning: we try to “gain” our life by self-assertion and end up “losing” our life in frustration and misery.