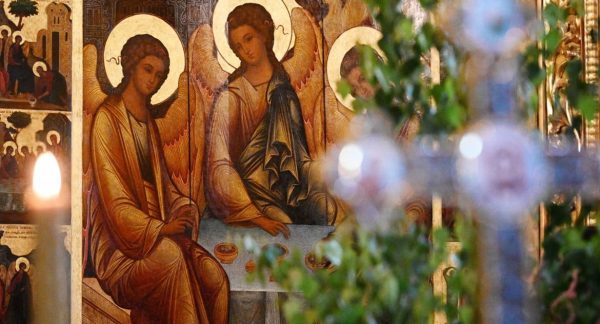 “For God so loved the world that He gave His only Son, that whoever believes in Him should not perish but have eternal life.” (John 3:16)

This verse from today’s Gospel reading (John 3:13-17) expresses in a few words the core message of Christianity. It is a beautiful and memorable announcement of the gospel, the good news of salvation. It is also a summary of the history of salvation, the whole story of the dealings between God and humanity as told in the Old and New Testaments.

“For God so loved the world.” Why should God love the world? Is the world lovable? Many people today view the world as entirely unlovable. The world follows its own ways. It seems to care little about God. It flaunts God’s will about justice, truth, love and peace in a myriad of ways.

Sometimes we too do not feel lovable. We have difficulty in relating to others. We are frustrated by the political and social problems of our nation. We may be disappointed and discouraged because we have not lived up to our own ideals. We have failed God doing the same wrong things multiple times. If we expect anything from God, it may not be praise and love but disapproval and judgment.

Nevertheless, God loves us. He loves us with an unceasing and boundless love. Why does God love us so much? First because it is His nature to love. No other religion than Christianity proclaims its God to be a God of love. In the words of the Evangelist John “God is love.” (1 John 4:8, 16). And again “In this is love, not that we loved God but that He loved us.” (1 John 4:10)

God loves us because of another reason too. We are His creation. We are His children. St. Augustine taught that God’s love is personal. When God looks at the world, He sees not an anonymous mass of humanity but each person. God loves each person as if she or he is the only one on earth. Each person is God’s favorite.

We belong to God and our nature is to be connected to Him. Created in His image and likeness we are endowed with amazing attributes of heart and mind. We have the intelligence to probe the depths of DNA and to explore the vast expanses of distant galaxies. We possess creativity to explore new discoveries and to imagine new forms of beauty. We are gifted with moral sensibilities such as integrity and justice, truthfulness and compassion. We are capable of the supreme sacrifice of our own life for the safety and well-being of others. All these attributes have but one source: God’s love.

“God . . . gave His Only Son.” The greatest gift God has given to us is His Son, the Lord Jesus Christ. Christ is God Emmanuel, the incarnate “God-with-us.” (Mat. 1:23) The person and life of Christ are the “good news of great joy” (Luke 2:10) for the whole world. God has given to us the most precious gift He had to give, His only Son.

As parents, Presvytera and I have been blessed with two daughters and two sons. Would I consider giving one of my sons for the life of the world? I would find it very difficult, almost impossible, except for one probability. If one of my sons, voluntarily and out of his love of people, set his mind to offer his life to rescue humanity from some deadly plague or great war, I might likely consider it. It would be a most painful experience but I would probably honor my son’s offer of self-sacrifice to achieve a great benefit on behalf of others.

It is true that sinful humanity deserved to have suffered the pains of the Cross rather than Christ, who was totally pure and innocent of sin. Christ took on our infirmities and the burden of our sin. But that does not mean that He was forced to do so by any power outside of Himself. He did so voluntarily and out of love for us. As He said, “I lay down my life . . . No one takes it from me, but I lay it down of my own accord.” (John 10:17-18)

When the Scriptures say that Christ had to suffer and die as part of God’s eternal will (Mark 8:31; 14:36; Luke 24:46; 1 Cor. 15:3-4), it is not the case that God was angry at the beloved Son, nor that God’s justice demanded the death of the Son as satisfaction. Those kinds of notions would turn God into a cruel Judge rather than a loving Father. God is and always remains a God of love. God is not bound by any kind of notion of blind fate or blind justice, above the power of love and above the freedom of love.

The teaching that God sent His son to the world out of love is true and purposeful. The Son offered His life on the Cross voluntarily as an offering out of love for the world. God accepted the Son’s voluntary offering as a sacrifice, in the light of the Temple worship, for the redemption and forgiveness of humanity. The salvation of the world is an act of divine freedom, just as it is an act of divine love from beginning to end. Divine love is the highest power in the universe and continues to work the salvation of the world today through love.

“That whoever believes in Him should not perish but have everlasting life.” God’s gift of Christ accomplished a double blessing. On the one hand it was God’s purpose that no beloved creation of God should be lost or perish. Salvation is a great rescue operation, a deliverance from the powers of evil, sin and death. We call that “redemption,” an act of release and freedom from the evil powers defeated by Christ by His death and resurrection.

On the other hand, the gift of Christ was also a gift of divine life. As He said, “I came so that they may have life, and have it abundantly.” (John 10:10). Elsewhere in the Gospel of John we read “In Him [the Son] was life, and the life was the light of people. The light shines in the darkness, and the darkness has not over come it.” (John 1:4-5). By His resurrection Christ began a new messianic age, the age of new creation, in which we now live and eagerly anticipate the fullness of God’s kingdom in the future.

The hymnology of the Church calls Christ “the sun of righteousness” [hêlios tês dikaiosynês]. Just as the physical sun glows with light and warmth to give energy and life to the earth, so also Christ shines with love and grace to give saving power and fullness of life to those who believe in Him and follow in His footsteps.

The physical sun releases immense amounts of energy per second according to astronomers. Christ possesses all the divine attributes. He is the All-ruling Christ [Pantokratôr], the Lord and King, who is depicted inside the domes of our churches. He shines forth with boundless energy of love and grace. And it is all a gift for those who believe in Him and follow the way of love. “Love is of God, and those who abide in love abide in God, and God abides in them.” (1 John 4:16) Love is the highest power in the universe: God’s love. Amen.