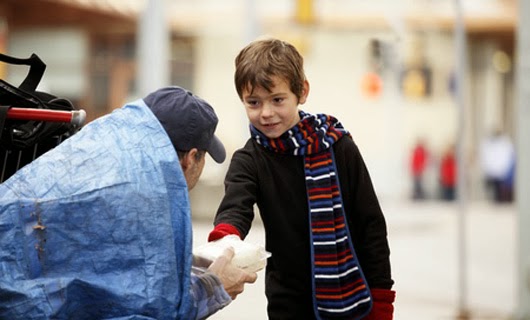 It is understandable why many people are tempted to think that the quality of their lives boils down to how much money they have.  The necessities of life are not free, and we have to be good stewards of our resources in order to care for ourselves and our families. Too often, however, this truth is taken out of context and securing our livelihood becomes a false god.  Far more important, of course, is the need to be good stewards of our spiritual health, for no one else can unite us more fully to Christ through prayer, fasting, generosity to the needy, and vigilance over the thoughts of our hearts. We ourselves have to cooperate with the Lord for our salvation.

Unlike matters concerning money and what it can buy, however, we never purchase God’s mercy.  We are never partners in a contract with the Lord such that He owes us this amount of grace for that good deed.  No, the healing of our souls comes from Christ’s gracious sharing of Himself with us.  Of course, we must open ourselves to receive Him through humble, faithful obedience, but we are never customers to whom something is owed when we stand before the Lord.

On Friday, the Church celebrated the feast day of Sts. Peter and Paul, for which we prepared through the Apostles Fast.  When the Lord sent out the twelve Apostles, He said to them, “Heal the sick, raise the dead, cleanse lepers, cast out demons. You received without paying, give without pay.”  (Matt. 10:8)  Contrary to those who would distort Christian faith and ministry into a means of gaining worldly power and wealth, the Apostles are living icons of the selfless mercy of Christ, Who offered Himself freely for the salvation of the world.  He came to heal and restore every human person whom He created in His image and likeness.  The One Who conquered death for our sake through His glorious resurrection on the third day also healed the sick and gave sight to the blind.  Purely out of love for His suffering children, Christ blessed wretched, suffering humanity by restoring us both spiritually and physically.

That is precisely what the Savior did for the two demon-possessed men in today’s gospel lesson.  They had lived a miserable life in the tombs and no one would come near them out of fear.  As Gentiles, they had no claim on the ministry of the Jewish Messiah.  Nonetheless, He had mercy on them, casting out their demons and restoring them to a recognizably human existence.  Obviously, there was no way that these two men could have earned or deserved what the Lord did for them.  The change in them was so real and shocking that the people of the area actually asked Christ to leave as a result.

This kind of gracious ministry that transforms people’s lives continued in the work of the Apostles and has extended even to the present day in the life of the Church, the Body of Christ.  The Holy Spirit continues to empower Christians to manifest the divine love as described in today’s epistle reading:  “Love is patient and kind; love is not jealous or boastful; it is not arrogant or rude.  Love does not insist on its own way; it is not irritable or resentful; it does not rejoice at wrong, but rejoices in the right.  Love bears all things, believes all things, hopes all things, endures all things.  Love never ends.”

Contrary to much popular opinion, Christ-like love is not merely a matter of feeling or emotion, but of selfless commitment for the sake of a neighbor.  It requires offering ourselves to other people in ways that manifest how the Savior offered Himself for us.  It is a quality of a relationship in which persons grow in union both with the Lord and with one another.  By sharing His life with us, Christ enables us to become truly human by becoming more like Him in holiness. He shares a common life with the Father and the Holy Spirit, and those who are members of His Body are also members of one another united in love.  Even as He came to save all who bear His image and likeness, He calls us to display His love in a way that invites all to embrace the fullness of their healing in Him.

That is precisely what Saints Comas and Damien did in the third century as holy unmercenary healers.  They were physicians and brothers from a rich family who gave away their wealth and devoted themselves to healing both human beings and livestock.  God enabled them to work miracles, and they refused payment for their services, asking only for their patients to have faith in Christ.  Ultimately martyred in Rome, these saints provide a powerful example of what it means to embody selflessly the Lord’s love for suffering humanity.

Such ministries have continued throughout the life of the Church.  For example, Sts. Mother Maria Skobtsova, Fr. Dmitri Klepinin, and their companions literally laid down their lives in Nazi-occupied France to protect Jews from the Holocaust.  They died for Christ in concentration camps because they disobeyed unjust laws in order to love and serve Him in their neighbors.  Before World War II, St. Maria had sacrificed greatly to organize an extensive series of ministries to serve impoverished people in Paris who lacked the basic necessities of life.

Like Sts. Peter and Paul and the other Apostles, these saints did not expect or receive earthly glory for their ministries.  Instead, they all died as martyrs who were never considered successful by conventional standards.  Even as the Lord’s Cross appears foolish from the perspective of the world, so did their lives and deaths.  We must learn from their righteous examples not to worry about whether the way of genuine Christ-like love for our neighbors wins the praise of others or helps us succeed according to the standards of our culture.  Like them, we must learn that serving Jesus Christ is not a path to glory in the kingdoms of this world, but instead is how we may open ourselves to the blessedness of the Kingdom of God.  We will not enter that Kingdom according to what we think we deserve or what we think God owes us, but by the same divine mercy that we must embody as channels of blessing to our suffering brothers and sisters.

As those who call upon the mercy of the Lord for ourselves, we have an obligation to show that same mercy to others.  If we are united with the Savior, His gracious life must become evident in our lives.  He did not come to give us what we deserve, but to unite us to Himself in love by His grace.  If we are to have any part in the Savior, we must become living icons of His undeserved mercy for the healing and transformation of all He came to save.  That is how we, too, may become fully human in God’s image and likeness.