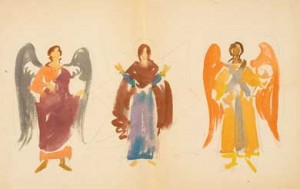 Inspired by his days in Paris and influenced by Byzantine tradition, Constantinos Parthenis experimented with the use of color when he was asked to paint the Aghios Alexandros Church in Palaio Faliro, southern Athens, in 1918.

The aforementioned activity “paved the way for a change of direction in the narration of newly constructed churches in the modern Greek state,” noted Dr Nikos Zias, professor emeritus of the University of Athens, at a recent press conference on the summer 2013 exhibition at the Basil and Elise Goulandris Foundation’s Museum of Contemporary Art on the Cycladic island of Andros, which he curated.

“Depicting Transcendence: From Byzantine Tradition to Contemporary Art” aims to explore the influence of Byzantine iconography in modern Greek painting as well as the development of contemporary ecclesiastical art.

“There were no artists per se in Byzantium, but artisans, all subject to dogmatic limitations,” said the museum’s director, Kyriakos Koutsomallis, who added that centuries later a new generation of artists managed to incorporate traditional and modernist elements into their work, thus “contributing to a resurgence of interest in Byzantine art.”

Art collectors Basil and Elise Goulandris established their foundation in 1979 as a nonprofit organization for public benefit aiming at promoting the visual arts. The same year the couple established the Museum of Contemporary Art in Hora on Andros, the birthplace of Basil P. Goulandris. The foundation’s permanent collection includes more than 300 works by local and international artists, while part of the collection goes on display on a rotational basis during the year.

“Depicting Transcendence” runs to September 29. The exhibition is accompanied by a catalog featuring texts by scholars and is edited by Christos P. Margaritis.

July 23, 2013 Centuries before the area was known for its Byzantine monasteries, the natural sandstone rock pillars…