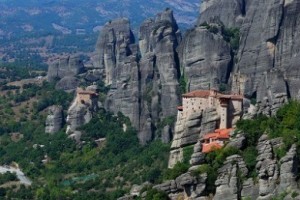 Centuries before the area was known for its Byzantine monasteries, the natural sandstone rock pillars that characterize Meteora – meaning “suspended in the air” – inspired the bold, and perhaps even offered refuge to the hopeless – who are rumored to have climbed the giant rocks to escape from enemies.

Although no one is exactly sure when the first climbers settled on the huge rock formations – though historians believe it was during the 12th century, or even earlier – what’s certain is that it must have been a formidable ordeal.

Of course, upon scaling the rocks, the climbers soon discovered that the real test had only just begun, as the lofty caves, which provided shelter, condemned them to almost certain solitude. Makeshift wooden grips and iron stakes protruding from the massive rocks testify that the establishment of the Byzantine monasteries in the 14th century would not have been possible had someone not previously climbed the sheer cliffs without any technical support. This allowed the next round of climbers to use ladders and nets to hoist themselves and goods up the gigantic rocks. These included those who carried a heavy metal cross up the 300-meter monolith of Aghio Pnevma (Holy Spirit) in 1348 on the orders of the Serbian king Stefan Dusan. The cross was carried to the Monastery of Varlaam in 1975 by helicopter and remains there to this day.

Tunneling paths and roadways allowed the monks access to all but a few of the tallest monoliths, while still preserving the inspiring panoramic views, which move even the most thick-skinned visitors.

The most adventurous visitors still view the rock formations at Meteora as a source of inspiration to test their limits. And the local community has grown used to the hundreds of climbers who come here each year from around the world to attempt to scale one of the 700 routes, which range in difficulty. However, more scarce, but still not so unusual, are the hang gliders and parachutists.

This summer, Meteora was due for a major boost as an extreme sports destination, with the makers of energy drink Red Bull having made plans to shoot a five-minute promotional video featuring renowned Norwegian base-jumper Jokke Sommer soaring over the area’s monoliths in a wingsuit.

The 27-year-old’s Meteora jump was scheduled to take place this month, and Red Bull – which has filmed numerous videos in Greece, including one of Australian motorcycle jumper Robbie Maddison crossing the 85-meter Corinth Canal – had secured permission from the Central Archaeological Council and the Greek National Tourism Organization (GNTO)

The five-minute clip would have been screened in 160 countries, providing much-needed cost-free promotion for Meteora.

However, the plan was scrapped late last week after Seraphim, the metropolitan bishop of Stagoi and Meteora, along with other high-ranking clerics in the area, filed official complaints with authorities, claiming that the use of the monastic site for commercial purposes is blasphemous.

“We were told that the video would promote Meteora. But Meteora is already well known from China and Japan to every continent in the world. We don’t need this commercial,” Seraphim wrote to Culture Minister Panos Panayiotopoulos.

Despite assurances from the company and central authorities that holy sites would only feature in the background and would not be used as a base station nor as a helicopter landing site, the clerics refused to back down, prompting Red Bull to cancel the shoot.

According to the Ethnos daily, Sommer – who is one of the best-known wingsuit proximity fliers and has even flown between two skyscrapers in Rio de Janeiro – was bitterly disappointed by the news as he had visited the site and had been looking forward to making the jump.

July 1, 2013 Inspired by his days in Paris and influenced by Byzantine tradition, Constantinos Parthenis experimented with…